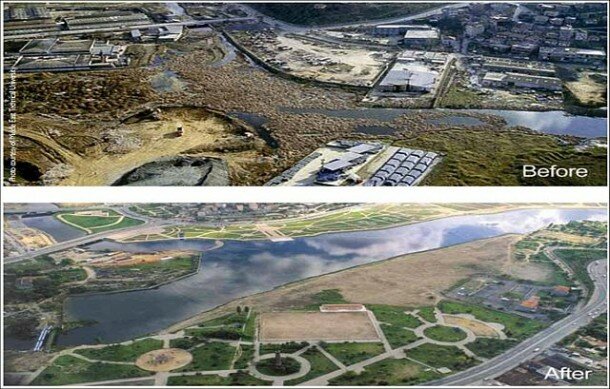 Thomas Friedman touts the ‘wonders’ of globalization in his highly popular book The World is Flat, however, globalization is not producing an economically ‘flat’ world, but one that is giving prosperity to a few and misery for billions of people in terms of their physical environment and quality of life.

I lived in Istanbul, Turkey for five years. It is a city whose very existence is related to its crucial location on one of the major sea lanes in the world.

When I went over the Bosporus (the strait connecting the Black Sea and the Sea of Marmara) on a bus via one of the two bridges crossing it, I always stared out the window with awe at the magnificent panoramic vista spread before me. Yet, one had to forget about the tremendous amount of pollution that is related to shipping, industrial and residential land uses in this and most water bodies surrounding the city.

Nearby, is the ‘poster child’ of water pollution for the Istanbul area, Kuçukçekmece Lake. While working at a local university, I and other professors studied the lake for a year, taking samples in a small boat during all four seasons. The research team also explored the surrounding area, gaining an up-close look at lake. Significant levels of pollution due to industrial, agricultural and residential use were found.

Industries had poured affluents into the streams leading into the lake, some of them turning green or a dirty reddish-brown color. Raw residential sewage and garbage was being dumped directly into it. Fertilizes from farms and oils, detergents etc. from residential areas ran off unabated to the lake. The lake was on the edge of being oligotrophic with few animals still living in lake.

Recently, there have been major clean-up efforts, but the damage has been done. One can hope that one day the lake will go beyond this horrid state. But, it is doubtful that it will ever be up to the standards for recreational use and almost certain that it can never be used for drinking water. A drinking and recreation water body has been sacrificed for industry and residential development. This is one example of how water resources have been squandered particularly in middle to low income economies.

Istanbul, like many other cities, is slowly starting to recognize the economic value of clean water and the use of water bodies to further enhance its image and its cultural economy. One success story in the metropolitan area has been the cleanup of a historic inlet of the Marmara Sea at the very center of the city called the Haliç and its current redevelopment into a museum/cultural complex. This is a major effort comparable to other high income developing nations. However, Istanbul, like many mega-cities in middle income economies, is confronting the effects of expanding population and industrialization which is often outstripping any efforts to mitigate their environmental impact.

While Istanbul is making efforts to clean up polluted water bodies, it is not the case in other regions where some water bodies resemble a vision of hell.

Such is the case of Lake Karachay, Russia near the border of Kazakhstan. It is recognized as the most polluted water bodies in the world. For decades, it was used as a nuclear waste dumping site. Just standing on the shore would give you a lethal dose of radiation in 1990, according to the Daily Mail (U.K.)  Near the lake, there had been a notable increase in cancer, birth defects and Leukemia. During a drought, when the lake dried up, radioactive particles became airborne and spread on the ground in surrounding areas. The present situation is not much improved. The pollutants are also in the ground water and the local population does not know how much radioactivity there is local produce.

Not quite as toxic, but an equally appalling example of how man can destroy his environment is that of Citarum River in Indonesia, located in West Java. There is so much garbage thrown in it that it covers its surface. The textile manufacturers use the river to dispose  all types of chemicals and heavy metals, many which are known carcinogens. Greenpeace and an Indonesian environmental group have urged a moratorium on dumping hazardous material in the river. There is a major clean-up project by the Asian Development Bank totaling  half a million dollars, but many doubt this will be enough.

And, the list goes on throughout the developing world.

In the United States, one could be very smug about conditions around the world as compared to the U.S. However, due to industrialization many bodies of water are still “less than pristine.” This is despite major clean-up efforts  and the establishment of the U.S. Environmental Protection Agency. According to an article in Mother Jones, many of the world waterways, such as the Ohio and Mississippi are still receiving significant, but legal discharges of toxic waste.

Water is the most important resource in the globe. But, due to industrialization, increasing use of arable lands, use of chemical fertilizers and increasing population pressures, many of our water bodies are being threatened.

It has been said that the next war will be fought over water. This could occur if sufficient action is not taken to correct this problem on numerous scales.

Image Credit: Pollution cleanup from a case study of Istanbul.