Will Turkish PM Erdogan’s Authoritarian Rule Blow Up in His Face?

Republic of Turkey has been rocked by the 3rd day of protests, in what started as a small scale, peaceful sit-in protest against the demolishing of a historic public park in Istanbul, has escalated into some of the worst scenes of public disorder and police violence seen in the country in recent years.

The clashes over Gezi Park, next to Taksim Square, broke out Thursday and continued there and in the capital, Ankara today.

The re-development plan of the park includes a shopping mall designed as Ottoman era military barracks, and requires all the trees in the park to be cut. Opponents of the re-development plan say the park is one of the few green areas left in central Istanbul and public land has been given to AKP regime’s followers without the people’s approval, to build malls and apartments to sell and individually profit.

In a defiant speech to the exporters’ union, PM Recep Tayyip Erdogan insisted the project would go ahead, and that the historic Ottoman era military barracks would be rebuilt on the site as planned. International human rights organizations condemned the police’s tactics. In his speech, Erdogan carped the “preaching” of foreign governments, saying they “should first look at their own countries”.

Correspondents say the local issue has spiraled into widespread anger over perceived “Islamisation” of Turkey and the Erdogan’s extending of his power over the government at the expense of constitutional checks and balances,. Demonstrators, some of whom threw rocks, chanted “unite against fascism” and “government resign”.

Prime Minister Erdoğan has been in office since 2003. He is the 25th elected Prime Minister of Turkey. He is also the chairman of the ruling Justice and Development Party (AKP), which holds a majority of the seats in the Turkish Parliament. The Turkish Republic has been established as a secular democracy after the World War I, from the ashes of Ottoman Empire.

The Gezi Park movement now has turned into a larger protest reflecting many of the fundamental antagonisms against the Erdogan’s divisive rhetoric and his penchant for authoritarian rule. It is impossible to separate the demonstrations on the streets from the anger at the secular Republic’s subtle “islamisation” by the AKP tactics.

Soon after Erdogan came to power, one of his first initiatives was to infiltrate the Judicial Branch of the Turkish Government with more hard-liner Islamists who were openly against the idea of a “laic” and “secular” Turkey. Next step towards his Islamic Republic was to penetrate the police with more Islamists and anti-secular AKP followers. Third step was undertaken by dismantling the top brass of the Turkish Military which are known to be supporters of the secular government system.

Currently there are several top military commanders held in jail, allegedly for plotting to overthrow the Erdogan’s government, without evidence of any wrongdoing, and without due process. There are more journalists in jail in Turkey today than in any other country, just one front of Erdogan’s assault on free speech. The journalists are kept in prison under the similar conditions the generals are kept, no evidence or a court date.

Erdogan’s administration also has recently paired his environmentally questionable policies with more stringent restrictions such as the sale of alcohol, red lipstick ban for the Turkish State Airline flight attendants, restrictions on public displays of affection (kissing) which have steadily eroded the party’s support from small constituencies that it could once count on.

Erdogan’s problems do not end with banning of the alcohol. One of the protest signs summed it up better than any: 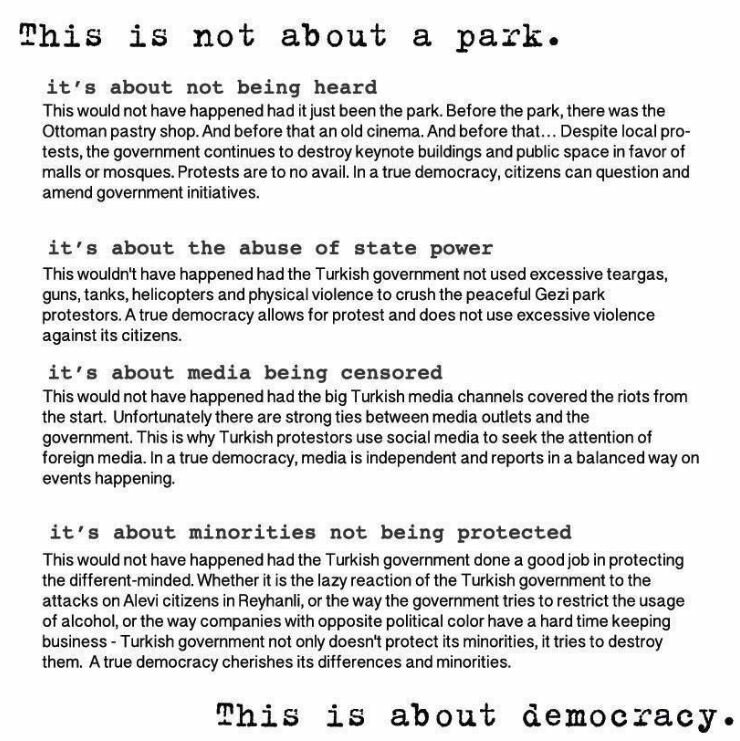 The protests have unleashed the anger against the Erdogan’s political agenda. The only way for the government to appease the protesters is to compromise. However, everything about the AKP’s history and Erdogan’s authoritarian rule suggests that this route is unlikely. Unless Erdogan is willing to make some concessions, the dynamics that have underpinned the protests will continue and more clashes could erupt at any time, even if these set of protests are stopped at this time.