Why is France in Mali?

Posted by The Participle Dangler on Tuesday, January 22, 2013 · 5 Comments 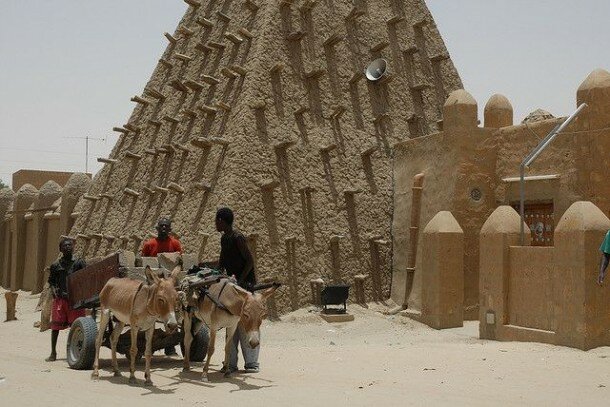 We have seen from a variety of news sources lately that France has deployed troops to the West African country of Mali to help fight radical Islamists, including a few branches of Al-Qaeda, who have taken over the north of the country.  Why is France doing this?

The area of land that is now present-day Mali was home to a series of advanced Muslim empires (such as the Ghana Empire and the Mali Empire) back when the Sahara Desert had not yet encroached as far south as it is currently.  There are precious historical edifices that remain in Timbuktu, a former seat of learning, religion and high culture.

As most people know, France colonized a huge chunk of Africa.  The country now called Mali was formed as French Soudan, a part of French West Africa, in the 1800s.  As with most former colonial territories, development has lagged behind that of Europe and North America. Mali is the one of the world’s poorest countries.

Unlike some other colonial powers, France had the explicit aim to produce more civilized French people, in addition to the usual extractive policies of other European colonizers.  As a relic of this, France has maintained a mostly friendly relationship with its former colonies.

Algeria borders Mali to the north, and it crucially had a more optimistic role in the French imperial design because it was considered a region of France, not just a colony like most other occupied territories.  Algerian rebels fought a brutal urban guerrilla war with the French military in the 1950s and early 1960s until eventually gaining independence in 1962, two years after most of the other French holdings in the region.  The two countries have had an uneasy and distrustful relationship since then.

Radical Islamists have taken advantage of southern Algeria’s geographical and political remoteness to set up shop.  With an already complex and often unpleasant history of immigration of North Africans in France, and a pattern of French nationals already being targeted by terrorist groups, the French government is understandably wary of this development.

Several months ago, Mali’s democratically elected government was overthrown in a military coup, paving the way for a gaggle of these Islamist groups (some of which are branches of al-Qaeda, others local Tuaregs hoping for independence) to continue to press south from Algeria unimpeded.  They have set about hiding among civilians, recruiting children, and destroying the cultural artifacts of Timbuktu. Mali’s government does not have the resources to fight them alone because the coup- predictably- fractured the military.  The impoverished populace is extremely vulnerable.

France is intervening in Mali partly out of a sense of obligation as Mali’s most prominent wealthy ally, and partly because it is in France’s best interest to limit the power of terrorist organizations in such close proximity to the métropole. Economically, access to the uranium mines of Niger is of importance for France, because a large percentage of France’s electricity comes from nuclear power plants and they get much of their uranium from the Sahel.

Additionally, Mali borders Burkina Faso, Algeria, Mauritania and Niger on the north. The fact that the region has rich fields of gold, oil and phosphate cannot be ignored.

France could benefit from the military operation by regaining influence over its old colonies, but by strengthening its relations with its former African colonies and stopping the Islamist militants, France can also play the role of a savior in the region.