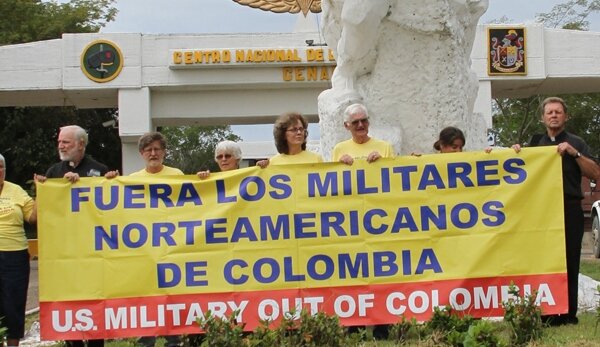 According to an 809 page report titled “Contribution to the Understanding of the Armed Conflict in Colombia”, published in February, 2015, the U.S. soldiers and military contractors had sexually abused at least 54 children in Colombia between the years 2003 and 2007.

The report was written as part of the on going peace negotiations between the leftwing rebel group FARC and the Colombian Government that started in November 2012, to assist the negotiators in determining who were the responsible parties in the bloody conflict. The negotiations seek an end to Colombia’s 50-year-old internal conflict with the FARC that has led to 220,000 deaths and seen about 5.3 million people displaced.

Renan Vega of the Pedagogic University in Bogota, one of the 14 scholars who contributed to the historic document,  complied research on the U.S. military’s actions during the conflict. The United States actively supported Colombia in its fight against drug trafficking and the leftist rebel groups like the FARC and ELN.

The report that was commissioned by the Colombian government and the FARC expresses that none of the abusers were arrested or prosecuted for these crimes, either in Colombia or in the U.S.A., due to diplomatic immunity agreements between the two countries.

Colombia Reports Newspaper affirms that according to Vega,

“There exists abundant information about the sexual violence, in absolute impunity thanks to the bilateral agreements and the diplomatic immunity of the United States officials.”

“In his report, the historian cited one 2004 case in the central Colombian town of Melgar where 53 underage girls were sexually abused by nearby stationed military contractors ‘who moreover filmed [the abuse] and sold the films as pornographic material.’

According to Colombia’s leading newspaper, El Tiempo, the victims of the sexual abuse practices were forced to flee the region after their families received death threats.

Other Americans stationed at the Tolemaida Air Base allegedly committed similar crimes, but possibly also never saw a day in court due to an immunity arrangement for American soldiers and military contractors agreed by Washington and Bogota.

“Yes, we took her and we raped her. So what?”,Alleged words of the U.S. Sergeant Michael J. Coen to the mother of a 12-year-old rape victim.

One case that has called most attention in Colombian media was that of a 12-year-old who in 2007 was raped by a U.S. Army sergeant and a former U.S. military officer who was working in Melgar as a military contractor.

Colombian prosecutors established that the girl had been drugged and subsequently raped inside the military base by the U.S. sergeant Michael J. Coen and defense contractor Cesar Ruiz.

However, prosecution officials were not allowed to arrest the suspected child rapists who were subsequently flown out of the country.”

The U.S. nominated former Assistant Secretary of State for Inter-American affairs, Bernard Aronson, as a Special Envoy to the Colombian peace talks in February, 2015. U.S. Secretary of State John Kerry told the reporters at the announcement of the Special Envoy that the Colombian President Juan Manuel Santos has requested for the envoy to “take a more direct role” in the negotiations.

So far the peace negotiations have failed to resolve key issues including disarmament and how any agreement should be ratified.

Aronson has already met with President Santos and the representatives of the FARC. As Colombia Reports asserts, one of the tasks of the special envoy will probably be investigating the role of the U.S. military and its members in the alleged victimization of Colombians. So far neither the Special Envoy nor the U.S. Government has released any official statement on the subject.

The U.S. Military presence in Colombia dates back to the early 1960s when the U.S.A decided to send a Special Warfare Team to Colombia, to assist the Colombian Government in their fight against the FARC and other leftist groups. In autumn of 2009, the U.S. and Colombian officials signed an agreement, granting the U.S. Armed Forces access to 7 Colombian Military bases which enraged the neighboring countries.

“In May 1964, as part of Kennedy’s Alliance for Progress, a CIA backed program was initiated, called Plan LAZO. The U.S. trained Colombian military troops invaded these largest peasant enclaves, using bomber aircraft with Napalm, in an attempt to destroy this threat. Many of the armed inhabitants of the enclaves escaped, and two years later part of this group formed the FARC (Revolutionary Armed Forces of Colombia). The FARC became the oldest and largest revolutionary guerrilla movement in the Western Hemisphere, being the longest running guerrilla movement in Latin American history.” Ana Carrigan, The Palace of Justice: A Colombian Tragedy 16 (1993 Four Walls Eight Windows), supra note 37.

Colombia has expressed its aspirations to eventually become a member of the U.S.-led NATO military alliance in 2013. The country signed a security agreement with NATO as a first step to join the alliance.

Last reply was 6 months ago