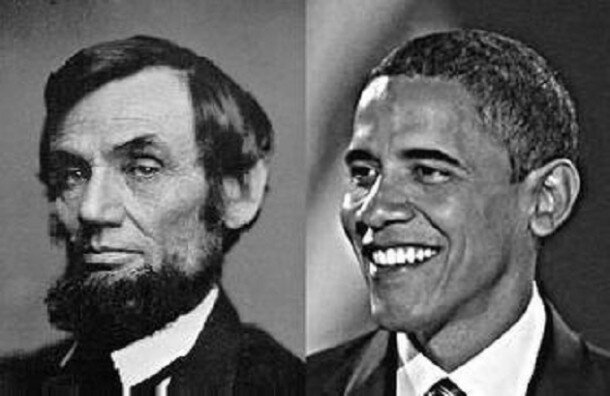 You may have seen over the years a long list of coincidences and similarities between the lives and deaths of John F. Kennedy and Abraham Lincoln.

Here is a link that lists those similarities: http://en.wikipedia.org/wiki/Lincoln%e2%80%93Kennedy_coincidences_urban_legend

All joking aside, there truly are some intriguing similarities between Abe Lincoln and Barack Obama.

Both men came from humble beginnings with little money.

Both men were born in other states and moved to Illinois.

Both became lawyers and practiced law in Illinois.

Both Lincoln and Obama served 8 years in the Illinois state legislature.

Both men failed to get elected to Congress on their first try.

Both men were successful in getting elected to Congress one time.

While in Congress, Lincoln said President Polk was waging an “unnecessary and unconstitutional war” with Mexico.

While in Congress, Obama said President Bush was waging an “unnecessary and unconstitutional war” with Iraq.

Both Obama and Lincoln opposed going to war at a time when the public generally supported that war.

Obama believed president Bush got the country into war with Iraq under false pretenses.

Lincoln believed president Polk got the country into war with Mexico under false pretenses.

While in Congress, despite opposing their respective wars, both Lincoln and Obama voted for all spending for the war, once war was declared.

Obama was accused of being unpatriotic for opposing the Iraq war.

Lincoln was denounced as a traitor for opposing the Mexican-American War.

Both men decided to run for president after having served 2 years in Congress.

Both announced their candidacy on the steps of the Illinois state capital.

Both ran for president at a pivotal time in American history when the country faced numerous crises.

Both Lincoln and Obama were known for their message of change.

Both men were accused of dividing the country due to their “radical” changes.

Both were regarded as gifted speakers.

Both were relatively unknown and were considered new to the national scene when they ran for president.

Both were considered politically “liberal” by the standards of their time.

Both Lincoln and Obama were known for their calm demeanor and cool head.

President Lincoln was criticized for using back room deals to get his biggest legislative accomplishment, the 13th Amendment outlawing slavery, passed by Congress.

President Obama was criticized for using back room deals to get his biggest legislative accomplishment, Health Care Reform, passed by Congress.

President Lincoln appointed his chief rival for his party’s nomination – the Senator from New York – to be Secretary of State.

President Obama appointed his chief rival for his party’s nomination – the Senator from New York – to be Secretary of State.

President Lincoln fired a top U.S. General, George McClellan, for insubordination and publicly showing contempt for the president of the United States.

President Obama fired a top U.S. General, Stanley McChrystal, for insubordination and publicly showing contempt for the president of the United States.

Both Lincoln and Obama were elected to a 2nd term.

Let’s hope the similarities end there.