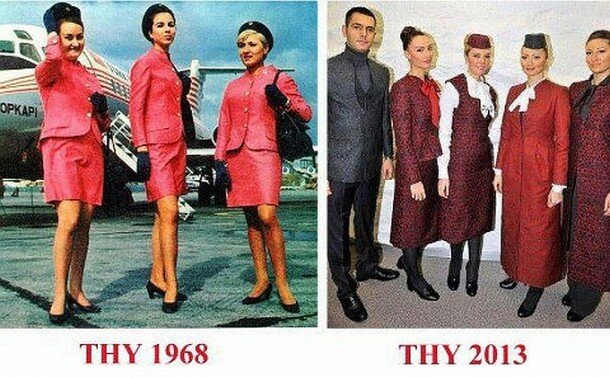 Last week, Turkish Airlines (THY), a state-run company flying to more than 200 destinations worldwide, announced a ban on the usage of red lipstick and hair buns for women flight attendants.

Previously, the airlines revised its dress code in 2012, banning the use of red and blonde hair colors for female flight attendants and female cabin crew. The new 2012 dress code forced women flight attendants to wear pastel colors uniforms and braid their hair, instead of pulling it up in ponytails.

The administration of Turkish Airlines claims the amendments to its “Flight Attendant Dress Code” were changed following “complaints submitted by passengers”.

Many of you might ask, why this is news? U.S.A. often cites Turkey to be one of its long-term trusted allies and a model open democracy for the Muslim world, the country being populated by 99% Muslims. Unfortunately, its openness and secularism is disappearing, in a very similar fashion that happened in Iran, slowly and through judiciary and educational institutions.

As Prime Minister Recep Tayyip Erdogan presses ahead with plans to rewrite the Constitution, to transform the country into presidency, and give himself more power, secular Turks wonder whether the sun is setting on their world. For Turkey’s liberal middle classes, the pro-western Kemalists and the nationalists who comprise the fractured opposition, Erdogan’s plan is considered a “constitutional coup”.

In Turkey, there is a subtle but visible regression of democracy. Public schools are being turned into imam seminaries, judicial appointments are being handed to known Islamists, prominent universities are being filled with Islamist instructors, music festivals are purged of alcohol, many journalists and generals who dared to question the government’s ambitions are stuck in prison and kept there for years without any due process, or even clear evidence of wrongdoing.

Just last month, an internationally known Turkish pianist and composer, Fazil Say, was charged with insulting Islamic religious values in comments he made on Twitter. A court in Istanbul –with its appointed Islamist judges- approved the charges against Say. He could face one and a half years in prison if he is convicted.

Whether Erdogan is like Putin or Ahmadinejad, or perhaps a combination of two, it is clear that since his reign started over the country in 2003, Turkey, once considered being one of the most modernized of all Muslim nations, is looking more and more like Iran; the Islamic Republic where the virtue police monitor the streets in mopeds for possible religious offenses.

Islamic revivalism as a counterrevolution against the secular and modernist Ataturk, the founding father of modern Turkish Republic after the World War I, has its roots in Turkish religious minority claims that the Turkish laws marginalize the devout. Nothing could be further than the truth. Since the Erdogan’s first election in 2003, number of mosques built by the government grew to 85,000 active mosques, the highest number per capita in the world, approximately one for every 350 citizens—compared to one hospital for every 60,000 citizens—and with 90,000 imams, more imams than doctors or teachers.

Erdogan enjoys his period in office since 2003 with the US’s blessings. He was elected in 2003, despite having been banned from holding office for his anti-secular, Islamist views and actions in Turkey.

It is curious why U.S.A., while vehemently against the Islamic Republic of Iran, is perfectly fine with supporting Erdogan with the full knowledge of his regressive policies.