This is America! We speak English- and Spanish, and French, and Chinese, and…

Posted by The Participle Dangler on Thursday, January 10, 2013 · 3 Comments

Even at the time of the Founding Fathers, there were other languages being spoken in and around the 13 colonies.  The Founding Fathers themselves were well-educated and multilingual.  People have come- and continue to come- from all over the world to participate in this grand, messy experiment that is the United States of America.  We conduct our business in English out of convenience and habit, not because there is something innately superior about English.

In spite of this multilingual and culturally-blended background, there is a virulent movement to eliminate other languages from the United States.  There is a Facebook page dedicated to it, many organizations dedicated to it, including some- not coincidentally- that are associated with known hate groups.  Their rhetoric may hide behind a support of English, but it is really about being against other languages and, more importantly, against the people who speak them.  It’s treated as a zero-sum game where any diversity or enrichment is considered a threat.  This is why pedagogically-sound, research-based bilingual education meets so much resistance.  Language is considered dangerous because its speakers are scary.

If we were to decide English should be our official language, we would have to codify it somehow.  Which version of English would it be?  There is incredible linguistic diversity just in the dialects of American English.  Imagine what it would be like if the government picked a new official variety of English, and it turned out to be dramatically different from your own.  What would it be like to have to learn to talk like, say, someone from New York or Chicago or Hunstville, Alabama?  What if you were turned down for jobs or social status because you didn’t speak the new standard?  I don’t imagine many people would be too enthusiastic about this, considering that even the most vocal “English Only” proponents are unwilling to master the prescriptive written standard as it is, as evidenced by the well-circulated images below (source): 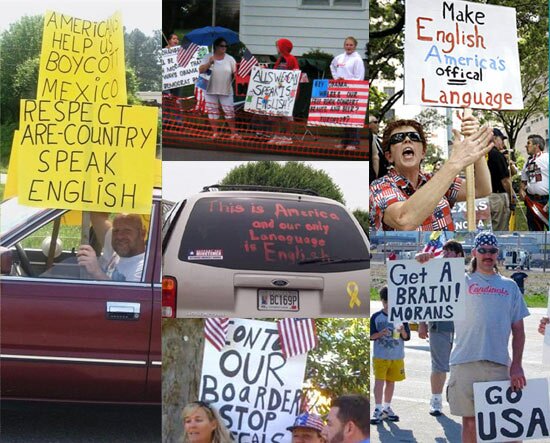 “English Only” movement supporters have tapped into something that is very true: language is a vital part of every community, and sometimes communities don’t like change.  At least, they don’t like to be aware of it.

In 2011, the American Community Survey estimated that only 79% of the United States population (over the age of five) spoke only English.  This means that 21% of US the population speaks another language, either exclusively or along with English.  In places where languages other than English are restricted in public life, people are restricted in accessing basic human rights services such as education, justice, and emergency health services.  Contrary to the fear that (particularly Hispanic) immigrants are trying to take over “America,” through the use of their native languages, the majority of these immigrants report that they believe it is important to learn English to integrate into US culture.

Linguists have been saying for decades that there is no such thing as an objectively illogical or inferior language or language variety.  Languages have political ideologies because of their association with the groups of people who speak them.  In this case, the minority languages under attack are targets because they are spoken by people who are feared and hated by members of the majority group.  Language is increasingly being recognized not only as a civil right, but as a basic human right, so any attempt to ban particular languages will eventually need to address this.

So let’s cut to the chase: this is not about language.  This is about power and fear.  The “English Only” branch of the anti-immigrant movement is an exercise in hypocrisy because it depends on English-speakers having an innate superiority by virtue of the fact that they were here first.  They’re the “real” Americans.

Instead, let’s call this what it is.  It is about xenophobia: a fear of the new and the unknown.  It is okay to be uncomfortable when confronted with cultural changes you don’t understand.  It is NOT okay to use that as an excuse to fight against the rights of other human beings.