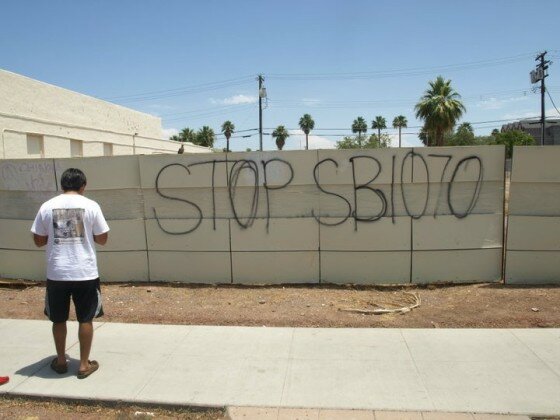 There’s a place in the middle of the desert where everything stops.  All movement ceases. The rocks, beaten into submission by centuries of harsh desert winds, look on wearily as though part of a silent jury. The temperature climaxes around 110 degrees Fahrenheit, distorting the surrounding air and giving the whole scene an otherworldly feel.

The place is a stretch of road in Arizona lying between Tucson and Phoenix.  Cars inch along endlessly; the line trailing for miles. For most of the time, the reason for the slowdown remains a mystery. Only until the cars climb the last ridge do their passengers see what has been holding them back. Jutting out of the desert scrub is an indescribably hideous structure.  Half-tunnel, half-loading dock, the construct is used to funnel travelers into the maw of the Arizona border patrol.

We encountered this artificial Bermuda triangle during the summer of 2011 on the tail end of a cross-country trip from Statesboro, Georgia to Pomona, California, on the outskirts of Los Angeles.  We had already logged 34 hours driving across the southern United States, 12 of those in Texas alone. As we left Tucson and headed back into the scant landscape that seemed to be taken right out of a motel’s art collection, the cars in front slowed to an almost unbearable crawl. For two hours we crept along, not sure what was causing the holdup. As our vehicle crested the hill, the desert gave way to a sprawling black complex busy with border patrol agents and drug dogs, all under the gaze of no less than 30 cameras.

A bulky sign proclaiming, “Traffic Checkpoint” sat atop the framework. Upon reaching the front of the line, a brusque police officer came to the window and began to interrogate us as if his time on Earth was being cut short. It should be noted that the ethnic composition of the car was not the most convenient at the time.

Between the three passengers there was exactly one Mexican (albeit with a heavy Southern accent), one Puerto Rican and half a Cuban. The officer asked about our destination, our reason for the trip (one of my good friends was moving to LA for his new job), the contents of the stack of suitcases in the backseat and whether or not he should be concerned about anything we had in the car.

There was a particular moment in the line of questioning when I realized that this was not an ordinary traffic stop. When the policeman looked into the backseat to inspect our suitcases, he also caught a glimpse of our Mexican friend. Faster than I’ve ever seen anyone react, he immediately asked if we were American citizens and demanded our identification. Because of the newly enacted Arizona immigration law, SB 1070, the officer was well within his rights to question our nationalities simply because we may have looked foreign. Satisfied, he waved us through, but just then I realized that we had been officially welcomed into a new America. This newly minted country, placed atop its predecessor, is one in which we are not citizens. We are suspects.

It’s a strange thing to have your identity as an American questioned by your own government. I admit that it’s extremely unsettling. It’s true that the glint and glamor  of America has worn off some and there are those in the public sphere who decry  this so-called decline. Ironically, it is those very people who are most to blame for the phenomenon. A large part of that waning can be attributed to a growing distrust within the American government in regards to its own citizens. Not since the McCarthy trials of the 1950s has our government treated its people as potential enemies.

The evidence is growing by the day. The Patriot Act, SB 1070, SOPA and the NDAA are all pieces of legislation that aim to restrict the liberty of Americans. The Bill of Rights is quickly becoming a thing of the past. SOPA threatened to destroy freedom of expression on the Internet. Many of our elected officials would like to entrench religion into our laws. Because of the NDAA, Americans can be imprisoned indefinitely without trial. The right to assembly in the modern day is a palaver, illustrated by the immense levels of brutality at the hands of police across the country in reaction to the Occupy movement.

As the government becomes more and more polarized, we as citizens, through no fault of our own, have become a threat to those who seek to consolidate power. Yes, the rising influence of corporate power is partly at fault. Yes, the rapidly increasing militarization of the police is a contributing factor. But at the heart of the problem is a deep-seated fear within the government of a change to the status quo.

It isn’t enough to camp out in a park and hold signs condemning the elites. For real progress to be made, coherent actions must be taken by the majority of Americans. This country can return to the level of esteem that it once boasted; it’s possible. But it will only happen if our generation realizes that in a very short amount of time, we will be our own leaders. Starting this decade, we will begin to take control of our country. We can either continue to toe the line of those in power today and allow our democracy to erode away from under us, or we can make a conscious decision to find a new path. If we wait to begin improving our situation, it will be too late. Change needs to begin now. Occupy brought the issues to the foreground. Now it is time to use that momentum to remake America into the shining beacon it once was.

Out of many, one.

Editor’s note: This article was originally published in the February 2012 issue of Urbane Sophisticate magazine.