The Tree of Liberty and The Roots of All Evil 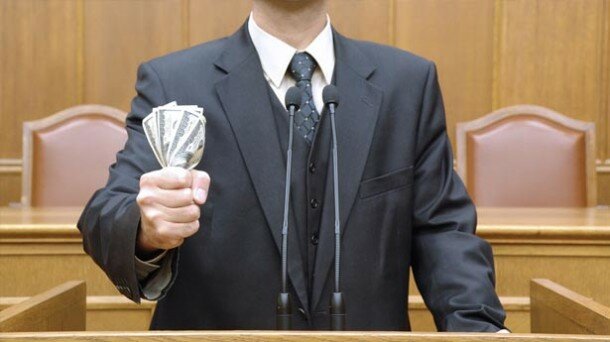 And liberty and justice…for those who can afford it…

Corruption. It’s one of the few issues that everyone, on every “side” simply detests. Regardless of the spin put on it or the arguments and justifications for its practice, most will agree there is simply no excuse for it. And while generally bandied like a partisan beach ball, with each side trying desperately to condemn the other for their influences and complicity, while bending over backwards to justify their own, so much is lost in the process. Despite this endless noise and outrage, the roots of corruption, the very mechanics of it, so often go disregarded in favor of generally pointless partisan fervor.

But what is this corruption everyone rages over? Where does it come from? Like most questions, the answer is simple: Money.

It does more than grease the wheels, as many say, but serves as the single underlying issue behind most, if not all corruptions, collisions and compromises of principle. While a majority of Americans pick sides and line up behind parties, hoping to paint their states red or blue, the politicians they follow line up behind monied interests, hands outstretched, palms up, looking for the true color of American politics, green. With the “admission price” to congress coming in at a minimum average of $1 million, the abilities for said interests to ply their influence with elected officials, though highly suspect, is seldom brought up by either the media or officials themselves.

From revolving door regulatory appointments to the fabled “no-bid and cost-plus-fee-award-contract,” the thousands and millions of dollars sunk into political campaigns by special interests every season, along with the threat of withholding re-election funds or diverting them to opponents and primary challengers, create environments where corporations and private interests with the means to contribute, not only find themselves with the politicians ear, but the ability to bend it like no one else. Couple that with the ways in which many industries of great power, diffuse their labor and production bases throughout the country and when possible, straddle congressional districts, to allow the carrot of financing to dangle from the stick of job numbers, it is little wonder why politicians are so beholden to them.

It was estimated that the 2012 election cycle was the single most expensive in U.S. history, with record setting fund raising and spending by parties, politicians and outside groups such as “Super PACs.” Ad buys, field staff, logistics and planning, everything related to a political campaign costs money. And as most campaigns are run more like commercial branding efforts than stately processes of debates and baby kissing, the ever increasing “cost of doing business,” requires that both the aspiring and incumbent alike, seek more support from big money sources, all of which expect their “kindness” to be repaid with dividends.

Take for example, the following appointments, made by the populist, hope-and-change President Barack Obama. To head the FDA, which serves to ensure all foods and drugs are safe for public consumption, President Obama tapped Michael Taylor, former lobbyist and policy chief for agro-chemical GMO giant Monsanto. This, despite the majority of progressives and even strong swaths of the conservative bases, coming out strongly against GMO foods and in favor of labeling.

Or for another example, consider the case of Ernest Moniz. A former energy industry sponsored researcher, who made a name for himself by defying ecological scientists general consensus regarding the dangers of fracking, and becoming one of its strongest proponents, is presently, much to delight of energy giants like BP and Shell, tapped to be the next Secretary of Energy. And with such a track record of playing footsie with the energy industry, it does not take a world of imagination or a degree in political science to guess where Dr. Moniz’s loyalties are likely to lie.

Now these sorts of appointments are nothing new. Nor are they indicative necessarily of some sinister agenda on the part of the Obama White House or any other politician. As noted in my interview with author and “economic hit-man” John Perkins, even were a President to somehow avoid falling into the web of corporate interest collusion, they would be politically destroyed by Congress, hell bent on raising their reelection funds, protecting their seats and making plans for the future.

When a politician first seeks office, the amount of compromises that must be made with select, monied interests, in order to continue running for and holding his seat, grow with every passing cycle. With demands and sacrifices necessary, in order to preserve election financing, being weighed against his or her genuine beliefs and agendas, those who survive are those who deal, while those who take a stand are generally crushed or marginalized. With a few well idolized exceptions, the ‘business as usual’ congressman, or carry-over legacy President is not merely all we happen to see enter offices of power, it’s all we’re allowed to.

In 2011, the Obama Administration attempted to make a number of cabinet appointments that were in many ways were nearly above reproach. Elizabeth Warren, a staunch consumer advocate, was initially tapped to head up his Consumer Financial Protection Bureau efforts, in wake of the highly destructive Wall Street investment and trading practices that eviscerated much of the middle class. However, after intractable opposition to this from Senate Republicans, who themselves represent a variety of corporate interests dead set on killing any development in real, tangible consumer protection, the plan was killed and the administration moved on.

And while partisan entrenchment and GOP obstructionism was the cause for such, it goes beyond mere partisan politics into largely manufactured ideological disputes. The  more common arguments one hears between the two mainstream American ideologies, those being liberal/progressive and the varying forms of conservatism (libertarianism, neo-conservatism, etc,) generally center on the role or size of the government. On an ideological basis, the majority of conservatives generally hold the view to one degree or another that when it comes to managing and delivering the goods and services the public relies on, the private sector, corporations, non-profits, churches and so on, are generally preferable to government run, public outlets. Inversely, the views held largely throughout the liberal/progressive side of things, hold that public goods and services are best handled on a public not for profit basis.

In their attempts to reflect and politically capitalize on these views, the dynamics in play between private interests and public government take on a divisiveness of their own. With the Republican Party often taking an affirmative stance on private campaign financing, regarding it as being akin to market based theories of democracy and supportive of free speech, Democrats are in many senses forced then to walk something of a tightrope, balancing between expressing populist sentiments against monied influences, while also avoiding having to bite any of the hands that feed them. In the GOP’s staunch pro-corporate stances, and the Democrats more populist rhetoric, the pride of the former becomes the shameful challenge of the latter.

While political financing and influence issues such as these are not exclusive to the U.S., their affects differ from many other places throughout the globe. The pay to play lobbying dynamics which have largely defined Washington politics, are themselves a Wild West of political intrigue when compared to other nations. In Germany, parties themselves may use party member dues for internal fundraising efforts and can apply for public financing, all of which is capped and regulated carefully. Likewise Iceland, a nation which has been receiving international attention and praise for its bold handling of banks and corporations amidst similar turmoil as that faced in the U.S., while still allowing private donations to campaigns, tightly controls them as well as the processes of their elections overall.

England, Canada, France…allies throughout the globe, all have to one degree or another, recognized the ills and perils of free-for-all big money politics, and while none have exactly reached a representative utopia free of corruptible influences, their strides towards cleaning up their electoral houses have, by many standards, put the U.S. to shame. In a nation where the President’s office maintains an open forum for online petitions, it is even apparently easier to call for the deportation of a television host for an outspoken view than it is to call for reforms of our broken elections system.

Alex Jones’ petition to deport Piers Morgan in January, reached 25,000 signatures in the relative blink of an eye. Yet while the conspiracy theory set managed to strap on their tinfoil hats and venture to a government website and shake their digital fists at a television “tyrant,” not nearly as many could be bothered to find this little beauty created by R.H. of Baldwin, New York. Its a petition calling to…

“Promote a national referendum to institute mandatory public funding of all congressional and senatorial campaigns.“

Yet despite being up for two weeks and speaking to the singularly central issue, which dominates, controls or destroys all real debate on every other issue (…be it environmental protection, the corporatization of war, the militarization of the police, the debt, the deficit, taxes…) and despite its generally straightforward nature, it has yet to break 1,000 signatures. A far cry from its needed 100,000, yet supporters remain cautiously optimistic. Though the petition itself is not on track to make the necessary number of signatures to get an official response (which incidentally, you can change, by linking to the petition, signing it and sharing it along with this article,) it still has a few weeks to go and is unlikely to be the last of its kind.

However petition, response or no, the fundamentally corrupting influence of money in the electoral will not go away until the demand for change becomes too great to ignore. With such division in this country and so few individuals voicing any real support for the political paper chase, now is the time for those with axes to grind and causes to champion, to recognize this one simple fact. Nothing real will ever change until we the people, have our officials’ full attention. So long as we remain divided over the variety of issues which define our politics right now and fail to address this root of all evil, our intractable positions on issues that are unlikely to see real action will only serve to keep us at the mercy of a faceless corporatocracy, and their big money political circus acts.

(For more information on campaign financing, or to see who your legislators’ interests are, visit maplight.org and their sister site, opensecrets.org.)