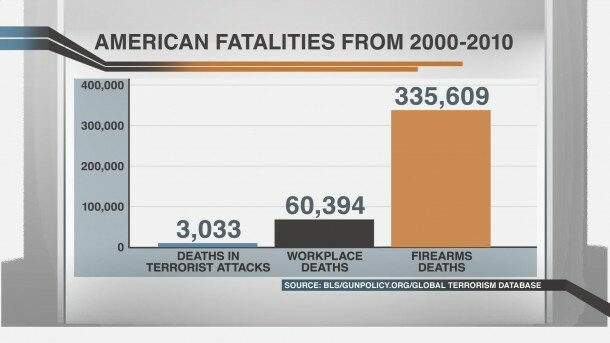 Last week’s news was  dominated by the story of the bombings at the Boston marathon, followed by the manhunt for the brothers who are suspected to have perpetrated those horrific acts. The attacks killed 3 and injured over 160. The manhunt caused the shutdown of the entire city of Boston for one day. It seemed as if the entire nation was shaken and captivated by this story. Unfortunately, the carnage and destruction of the Boston attacks was not the worst thing to happen in America last week.

By sheer numbers and destruction, the Boston attacks pale in comparison to the carnage and destruction caused by the explosion of a fertilizer plant in the tiny rural town of West, Texas. The explosion, which created a plume of smoke reminiscent of a nuclear mushroom cloud, killed 14 and injured over 200. The blast leveled an area the size of 5 square blocks in every direction, ripping apart a nursing home, an apartment building, and scores of nearby homes. The explosion was so massive, that it registered a 2.1 on the Richter Scale.

If there is one thing that we can learn from the Boston attack and from the response of the American media and people, it is that Americans take terrorism very seriously. The sheer manpower and resources put in to finding the Tsarnaev brothers was spectacular. The response to the Boston Marathon attacks is indicative of the mindset in post 9/11 America. After 9/11, Americans drew a line in the sand and said “we shall never let this happen again”. President George W. Bush created the Department of Homeland Security, we waged two wars on foreign soil (not to mention the covert drone wars in Yemen, Pakistan, and elsewhere), and we gave immense powers to the CIA and FBI with the Patriot Act. All of this was designed to make sure an attack like 9/11 would never happen again.

The contrast in reaction and coverage between what happened in Boston and what happened in West demonstrates something distinct about the priorities of the American people. Americans are much more likely to die in an industrial or workplace accident than they are to die in a terrorist attack. According to the Occupational Safety and Health Administration, 4,609 Americans died in workplace accidents in 2011 alone. Think about that for a second. Every day 12 Americans go to work and never come home. Every. Single. Day. The 4,609 Americans who died in workplace accidents is nearly twice the death toll of the 2001 attacks on the World Trade Center in New York. More Americans die on the job every year than have died in the entire 10 years of the war in Iraq.

Workplace deaths are preventable deaths. When OSHA was first created in 1971, 38 Americans died every day on the job. OSHA efforts and enforcement have had a clear impact on lowering workplace fatalities, cutting the rate of workplace fatalities by  65%. However, despite the overwhelming need for workplace safety regulations, OSHA reports having only about 1,000 inspectors who are tasked with regulating safety at over 8 million American workplaces. By the agency’s own admission, it would take over 130 years for them to inspect every workplace in the nation. The last time OSHA inspected the West, Texas fertilizer plant: 33 years ago. Even when OSHA does successfully inspect a plant and penalize them for violations, the penalties are laughably weak. The maximum penalty for an egregious, willful violation resulting in a workplace fatality: 6 months in jail. The maximum fine for a willful violation of OSHA rules: $7,000.

For the Fiscal Year 2012, OSHA had a budget of roughly $583 million to regulate against workplace injuries and death. By contrast, The Department of Homeland Security had a budget of over $52 billion, a great deal of which is used to combat terror. That is not even factoring in the massive money spent on drone programs, the CIA, and the more than $1.4 trillion spent on the wars in Iraq and Afghanistan. Even when compared to other regulatory agencies, OSHA is severely underfunded. The Environmental Protection Agency’s 2012 budget was $9 billion, close to twenty times the budget of OSHA.

The West, Texas plant had a history of safety violations, and did not even have so much as a functioning sprinkler system. This plant was a ticking time bomb left unwatched by the United States government. The devastation in the tiny town of West is an example of what can happen when capitalism is left completely unchecked. In a self-report to the EPA, the owners of the West, Texas plant said that in a worst case scenario, the worst that could happen would be a ten minute purge of ammonia that would harm no one. Reuters recently reported that the West plant failed to disclose to Department of Homeland Security officials that it had 270 tons of explosive ammonium nitrate on hand. Oops. So much for self-regulation. Plants will not regulate themselves, owners will nearly always put profits ahead of safety, and workers and citizens will pay the price. Furthermore, the only reason plants are even required to disclose to Homeland Security the amount of ammonium nitrate they have on hand is because of its possible use in a terrorist attack, not due to worker or community safety. OSHA currently has no rules regulating the storage and use of ammonium nitrate.

Dhzokhar Tsarnaev was recently charged with using a weapon of mass destruction in the Boston attacks which killed 3 and injured 200. The owner of the West, Texas fertilizer plant is unlikely to see any charges at all in the explosion that killed 15, injured over 200, and flattened half a town. Republicans and the business community have waged a war on regulations for  decades now. If the de-regulatory crowd continues to have it’s way, you can expect incidents like the one in West to increase in frequency. Those on the right claim that regulation kills jobs. But we can see from history that deregulation kills people. When terrorism inflicts death upon Americans, we spare no expense and will go to the ends of the earth in order to prevent it from happening again. Yet, when presented with the consequences of unregulated and out of control capitalism, we all too often decide to look the other way.

Perhaps it is time that Americans realize that the true “Weapon of Mass Destruction” they need to worry about isn’t from terrorism, it is from unregulated capitalism. When companies put profits over people, people get hurt. Workers get hurt, neighbors get hurt, communities get hurt. Will West, Texas be yet another footnote in a tragic story that continues to repeat itself? , or will the American people draw a line in the sand, like we do with acts of terror, and say “never again” ?