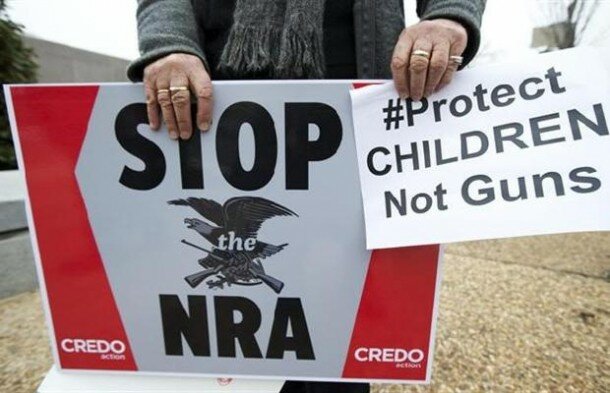 Think about the Constitution in terms of the tangible right granted by each Amendment – speech, assembly, worship, speedy trial. Within the 2nd Amendment lies the only individual right that involves a for-profit product. Guns are products. Other constitutionally guaranteed rights are not tied to products, which in our society are regulated, all of them – loans, cars, allergy medication, televisions – many heavily so. Yet, we fail, to the tune of nearly 30,000 Americans per year, with the most inherently lethal product on the market – guns.

This discussion should not be, and is not now, about the right to own a gun. It is one thing to say that you have a right to “defend” yourself and your family, quite another to say that you have a right to do it with an AR-15. This discussion should also not continue to be spun as control, as in gun “control”; for now, let’s say that was parsed and settled by our Supreme Court in D.C. v. Heller (2008), in which even conservative god, Justice Antonin Scalia, acknowledged that reasonable restrictions are essential. So, what reasonable, sane regulations are we, as a people, prepared to impose and tolerate for basic public safety and for the benefit of our society?

This is the quintessential push/pull of the American character, straddling individualism (“Live Free or Die”!) and community. To live in a community, individuals must stomach regulations on all liberties, on all freedoms, so that we may function as a civil and United States. Every sensible person grows up, understands this and accepts it for better or worse. Yet it appears that no matter how much we would like to, or how hard we try, we cannot have rational discussions with irrational people about this product. Alex Jones and his ardent “gun rights” followers come to mind. This is what I have to say to Alex Jones: Guns don’t have rights. People do.

Practical people participating in this dialogue may disagree about where on the spectrum these regulations fall, but that is the only debate we need to be having. I’ve said this before – the “low-hanging fruit” of assault weapons and high-capacity magazines is ripe. If we cannot agree on these basic parameters, then we will not agree to anything. Where is there to go if we do not identify with the first responders, or the crew tasked with clean-up in the aftermath of Sandy Hook?

If we cannot read the account by Veronique Pozner, mother of Noah, the youngest victim, and be flattened by the thought of a mother having to make the decision to identify her 6 year old son or not – and then, having bravely done so, to choose to describe to us, in detail, what a tiny, still developing body looks like when it’s been butchered by a Bushmaster .223 assault rifle and “exploding” bullets – ELEVEN TIMES OVER AT CLOSE RANGE. Just as we should never have one sliver of our society tasked with the burden of senseless wars (think: draft), neither, then, should Veronique Pozner have to live alone with her pain every single day until something is done. Who are we if this is not the very place where we say “no more”? 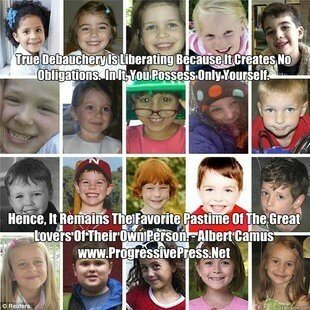 These “gun nuts” – who are absolute in their belief that they are entitled to assault weapons at our expense; who believe that they are one day away from having to defend themselves against a tyrannical government; who say “over my dead body, come and get it” – do they identify with Adam Lanza, the murderer? Because they are not identifying with Noah Pozner, the child and victim.

How can a person believe that their “right” to own assault weaponry (designed for no other purpose but to inflict maximum injury) trumps my right or our children’s right to peacefully assemble – by going to school, the mall or theaters – without fear of being mowed down by a weapon you should only see in the hands of our Armed Forces?

If you can soldier on, “gun above all else”, in the face of Sandy Hook and the 700 plus gun deaths in the U.S. since, then you are either crazy, a serial narcissist or a criminal. This way of thinking is so beyond the rational limits of individualism that brands the American character. It is a heightened form of self-importance, but more importantly, it is a trait of the stunted, a condition at the infantile level of personality development – the inability to recognize that others have rights, too.

These same people, if you really dig, probably also feel that the government has no right to set speed limits or to try and prevent them from driving while intoxicated, that they should be able to purchase leaded paint, or to keep elephants as domestic pets. That stop signs have no place in society, or any number of other limits we accept in our daily lives for our collective health, safety and welfare.

We need to think about which conversation we’re prepared to have with our children: (A) honey, I’m so sorry, but your twin brother was murdered and his six year-old body shredded by a killing machine, so no, he’s not coming home, ever again – or, (B) honey, I’m sorry, but no, we can’t take the Bushmaster ACR out for a Sunday rat-tat-tat-tat anymore because public safety and the greater good are bigger than us. But why don’t we take the old 12 gauge out for a spin instead?

Which conversation are you prepared to have?

And when a Sandy Hook lands in your lap, will you then change the answer?

[*ADDENDUM: The New York Times provides a complete (and staggering) chart illustrating the current state of our gun laws, addressing everything from background checks to state permits and licenses to ammunition. For those saying that assault weapons are “banned in most states”, I direct you here.]