The Pop-up City: Making Something Out of Nothing 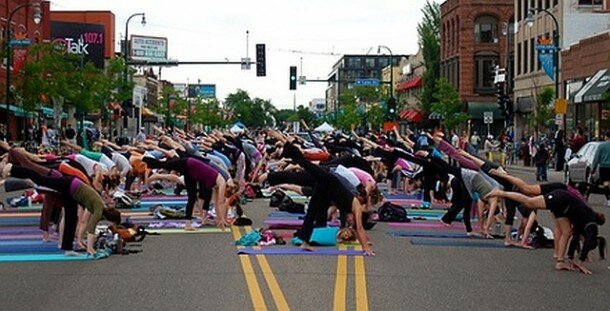 The city is constantly in motion. In a dynamic city, people are shopping working, interacting, eating in restaurants, drinking in a cafes, walking/driving to a destination etc. Without people, a city is merely buildings, roads, trees, parks, grass….a ghost town. However, many cities have become dull places, reduced down to their functional economic uses: retail, business, industry and residents.

This functional capitalistic city is embodied in the suburbs in the U.S.Suburban life has been reduced to strip malls, fast food restaurants, big box stores, malls, car lots, endless subdivisions, parking lots, streets, expressways and the constant buzz of cars and trucks moving through this nondescript urban landscape.

In a public suburban environment, you often don’t interact with people except in the stores. You and your fellow humans are merely objects whose only reason for being in these stores is to buy something. Those who work in the stores have no interest in you except as a vehicle to keep them employed. The faces of employees in restaurants, department stores, and other retail outlets come and go because they also are objects in corporation dominated capitalism. Back in your neighborhood, you may not know your surrounding neighbors. Many in the suburbs are completely unaware of what has been lost.

There is very little spontaneity present in suburbia. Public open places such as town squares, plaza and a sense of place have lost all importance in the lives of many suburban residents. To many, their lives are confined to work, home and shopping in impersonal shopping strips. Other aspects of community have also been lost as seen in the dramatic decline in membership in community organizations (Putnam, 2000).

Meanwhile, city centers in the U.S. are becoming alive again.The key factor is the pedestrian-oriented aspect of this section of the city and the ability to interact on a personal basis.There is a mix of land uses with residents near businesses, doctor’s offices, art galleries, museums, theaters, cafés, churches, mosques, parks etc.

You are not a passenger passing by, but a part of the urban environment. In the center cities, many of the firms are owned by local people who are consistent and are concerned that you return to their store or professional service.It’s an alive, vibrant, connected and dynamic place.

I experienced this type of environment when I was growing up in a small city in North Carolina.I used to walk from my neighborhood to the downtown, with a movie theater, a small record store, drug store, bank, bus station, pharmacy, municipal services and other businesses. Even as a child, I knew many of the shop owners because they knew my parents. Everyone in my neighborhood knew each other and were friends.I was never lacking children my age to play.Now, most of that is gone. The movie theater is now an evangelical church, the department store moved to a mall, and businesses. My old neighborhood looks the same, but I am sure the demographics have changed.

When I lived in Istanbul, the urban scene was still alive in my neighborhood. Right across from my street was a café that welcomed me as a respected quest. I could walk to a barber shop, grocery stores, restaurants, pubs, dentists, doctors etc. and be more than some anonymous person.One time, I met my barber walking down the street and asked me when I would return as he noticed my hair was getting long.  Another time, at another location, I met a man who once ran a restaurant in my area that had closed.  We greeted like old friends.

This connectivity, convenience, interaction is what has been lost in many cities in the U.S. particularly the suburbs. In other cities in the world, much of this atmosphere is still retained, but of course there are other problems such as poverty, poor building construction, unemployment, lack of opportunities, inflation etc. that plague many cities.

People in cities need places where they can interact in an informal setting. The isolation of suburban life and sometimes in the center city is not healthy for the overall well-being of a city. The city’s function may be economic but to make that the boundaries of its existence destroy the essence of the city.

The city in the U.S. is revitalizing with ‘pop-up’ stores, markets, events, temporary theaters, urban art and performing musician celebrating the temporary city. These impromptu spaces are creating a different atmosphere in cities.

They bring additional activity and creatively, to places and provide income to small businesses and artisans. In my travels both in the U.S. and Europe, I have seen numerous examples of this:

-Along the sidewalk, next to the Ipanema Beach in Rio de Janeiro, there are artisans who sell their goods, build sand castles for donations, a wide screen television shows Brazilian football at night and cafés are scattered at intervals where one can view the beach and people watch.

-In Istanbul, numerous streets are closed off one day per week for street markets selling not only fresh food, but clothes, and kitchen items.Some are known for specialty items or variety, so although you may visit your local market, you may go to others. The experience is much more than just shopping, but interaction with vendors. In the U.S., this experience is lost in ‘cookie cutter’ supermarkets.

-In the Paris Metro and London Underground, musicians play a wide variety of music from popular to classical.

-Along the Ramblas in Barcelona there are numerous stalls are established for books, social issues and flowers.  (You never know if we you will get involved in a political discussion along the Ramblas when we drop by one of tables with brochures etc. for an issue.)

-In London, near the historic reconstructed Globe Theater along the Thames River, performers and artists create a carnival atmosphere.

-In San Francisco, I wandered into a plaza that was packed with vendors selling a wide variety of ethnic foods near a small art museum which at time was showing Japanese art, both complementing each other.

These temporary experiences turn the city form a collection of stores, houses, streets and cars into an experience.

In a period of stagnation or decline in economic development in many cities, temporary or ‘pop up’ uses can bring new activities to a city which not only improves the quality of life, but also allows small businesses to flourish, artists to sell their work, and performers to have a venue at low or no cost.

In Berlin, Germany, an outdoor swimming complex was turned into a temporary campground for those attending the World Cup in 2006.It was a great success and provided much needed lodging (Gerend, 2007).

In other places, urban gardens have been established in vacant lots. For transitioning cities associated with the industrial revolution, such as Detroit, this is already in process (McAdams, 2013).

These temporary land uses fill an important gap in the city. Gerend (2007) states temporary land uses can:
• Respond to creative proposals (either private or community-based).
• Incubate small businesses.
• Experiment with uses before committing to a long-term plan.
• Allow market forces to play out.
• Buy time while fundraising and planning towards an ultimate master plan.
• Avoid gaps in activity (especially in retail areas).
• Enable unusual tourist attractions.

Urban environments have been regulated so that economic activities that favor commercial interests can make them mere economic agglomerations, making them sterile places, laying waste to the stuff that makes cities dynamic and exciting. In addition, the impact of these decisions is having negative social, economic, environmental and energy impacts which the U.S. is now realizing.

The growth in people moving back to the central city (or growth in smaller town centers that were absorbed in metropolitan growth) has been a response to the drab and subtly oppressive nature of the suburbs. Innately, human beings want social connectivity, visual stimulus, spontaneity and serendipity. This is despite the U.S. population being addicted to the automobile, dependent on big box stores and the trappings of a post-industrial economy; connected 24/7 to the cell phone, and the Internet.

The aspect of the temporary or ‘pop-up’ city is another aspect of an urban environment self-organizing and pushing away from governments which have guided land use planning according to rational decision-making tenants  of the later 19th and early 20th Century (McAdams, 2008).

Top down and rigid urban planning must be replaced with more spontaneous and appropriate urban environment.

The abandonment of the long range plan should be replaced by appropriate policies and regulations to ensure the multiple and changing goals and objectives of the diverse nature of the community. The policies may be a confusing collection to those planners tied with a rigid version of urban planning. However, a complex and organic set of policies and regulations will serve the diverse, integrated and dynamic urban setting much better than those prescribed by rational comprehensive planning (McAdams, 2008).

The notion of temporary land uses is not novel.The uses of open spaces for multiple  temporary land uses has been around for three thousand years or more for markets, religious, theater or social gatherings. If we open this up to other physical structures which are vacant such as unoccupied buildings for artisans, small start-ups, cafés, theater productions, housing, etc. we can bring activity, economic opportunities and revitalization where there was nothing.These small activities help the city to become a creative place going beyond the economic viewpoint of a functional city.

*Can be downloaded via EBSCO with membership via a public library, university etc.