The Mother of All Amendments 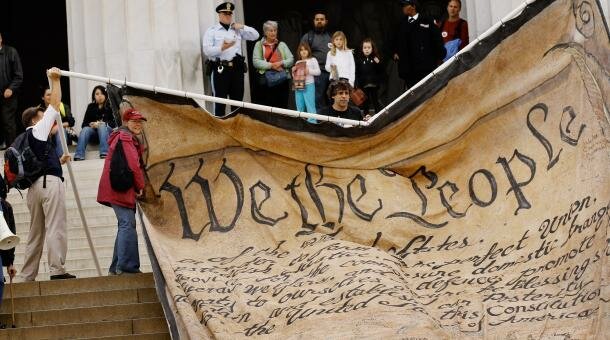 In the 13 days since Boston’s national nightmare brought us four murdered, 15 amputations and countless hours of medical attention for 282 injured, public reasoning on the origins of the attack and future prevention have predictably been all over the political yard in all the predictable corners.

Subsequent events and dialogues have rung out like octaves which could and should inform further debate and offer clarity to some fundamental discourse about our own origins, our national direction and our values as one People. Sadly, though, the barren residua of Newtown, Aurora, Oak Creek, Tucson and countless other tragedies do not bode well for progress. So let’s retrace our steps, shall we.

On April 15th at 2:49 EDT, the Tsarnaev brothers’ alleged gunpowder plot causes two rapid fire explosions at the finish line of the 117th Boston Marathon. Investigation reveals Tamerlan Tsarnaev had reportedly purchased some of the components for his pressure cooker bombs from Phantom Fireworks of Seabrook, NH, in the form of a ‘Lock and Load’ re-useable mortar kit; ironically the failed Times Square bomber of 2010 was also a Phantom customer for his own ill-fated bomb.

So what do bombs have to do with guns, the NRA, Chuck Connors as The Rifleman and a Free America? Since 1980 on the recommendation of law enforcement, various legislators have sought to place identifying taggants, a tracing agent, in black powder, substitute black and smokeless powders to try and prevent what happened last Monday. Doing its part to keep us all armed and dangerous, the NRA has consistently and successfully foiled every such government attempt to use taggants in its tireless defense of the 2nd Amendment right to bear arms and whatever goes into arms. So that’s what.

On April 16th, doctors reveal that the above gunpowder propellant(s) hurled nails, pellets and other shrapnel at victims, and the NRA remains quiet. Also on the 16th, President Obama, Senator Roger Wicker (R-MS) and a state judge receive mail laden with the highly toxic poison ricin, a few granules of which can kill a human with ease. After the FBI’s tracing of the items, searching of private homes, arresting of and subsequent clearing of a citizen, the NRA again remains quiet. Apparently, the 4th Amendment right to privacy is not equal in ‘founder value’ to the 2nd.

On April 17th, the FBI confirms they have video images of the men they believe to be suspects and on the 18th with no hard leads developing, the FBI releases said images of the Tsarnaev brothers to the public. This risky investigative step bristles with potentially dangerous public safety issues and privacy ramifications, yet the NRA remains quiet. Later that evening the brothers continue their shambolic escape attempt, armed with several more bombs, two handguns, an M-4 assault rifle and 250 rounds of ammo; by the late news, MIT police officer Sean Collier is shot dead. The NRA still remains quiet.

In remotely tertiary news related to our inquiry from April 17th and a corporate rendition of freedom, a fertilizer plant in West, TX, reportedly uninspected for 28 years, blows to high heaven, killing at least 15, wounding at least 200 and wiping the town clean off the road atlas.

Shortly after midnight on April 19th, Watertown residents awaken to a busy gunfight during which seemingly hundreds of live rounds are fired in their residential neighborhood, and the elder brother and purported leader of the duo Tamerlan Tsarnaev is shot, run over by his own brother Dzhokhar behind the wheel, and killed, in an as yet undetermined order. Also during the milieu, it appears one of the brothers’ IEDs is pitched grenade-style from their commandeered vehicle, and Dzhokhar manages to escape and stay on the lamb for another 17 or so hours. Later in the evening on April 19th young Dzhokhar is taken, shot but alive, cowering in the driveway-bound boat of a Watertown resident. And it’s still quiet over at Wayne LaPierre’s office.

Rounding out a busy and violent news cycle, domestic shooting sprees in Seattle, WA and Manchester, IL leave a grand total of 11 dead.

So looking back through the prism of our Constitution, we see some anomalies in the events themselves and the responses to same. Upon identification but before capture of either brother, Rep. Peter King (R-NY) was calling for routine surveillance of Muslims in the US as a matter of course; while this would shred the 1st Amendment rights to worship, assembly, speech and association, King failed to mention how the entire Boston episode may have been avoided if a common sense, logical application of the 2nd Amendment were more than a murky, elusive dream. 1st Amendment—Fail; 2nd Amendment—Pass.

Similar pronouncements taking the very long bypass around the 2nd Amendment also rose from the office of Rep. Mike McFaul (R-TX), who urged passage of the Cyber Intelligence Sharing and Protection Act, seen by many experts as fatal to our remaining privacy as citizens. Meanwhile, a highly agitated Rep. Mike Rodgers (R-MI) demanded explanations and hearings because after a mere 16 hours of interrogation, a critically wounded Djhokhar Tsarnaev was read his Miranda warnings at the insistence of a Federal Judge. 1st, 4th and 5th Amendments—Fail; 2nd Amendment—Pass.

Moving on, no sooner had the living suspect and US citizen been taken alive when Sen. Lindsay Graham (R-S.C.) called for him to be held as an enemy combatant of Islamic origin, to permit indefinite questioning, trial delays and abbreviated procedures violative of numerous legal hot spots in the Bill of Rights and elsewhere. 1st, 4th, 5th, 6th, 8th and 14th Amendments—Fail; 2nd Amendment—Pass.

Nearly two weeks after the bombing, while the NRA’s own Wayne LaPierre continues to remain oddly quiet on the prospective trampling of myriad Constitutional rights but for his all-time favorite, his fellow NRA executive board member Ted Nugent has had plenty to say on the Boston bombing, mocking any reexamination of the failed background check bill, vilifying the “Voodoo Terrorists” and calling for an abrogation of the still-living Tsarnaev’s trial rights as American jurisprudence has been hijacked by pesky things like attorneys, evidence and appeals. The Motor City Madman’s idea? “A July 4th celebration of stringing the son-of-a-b-tch (sic) up in the Boston Common and letting the crows pick at his rotting flesh.” 350 million Americans and 224 years of relative decency—Fail; 2nd Amendment—Boom.

Now, before any shooting sportsters or hunters still reading my screed go off half-cocked, I am not and will not lay the blame for the Boston bombing on you, your leaders, your obedient representatives in Washington, or the 2nd Amendment itself; even I have dined on yummy Northern Michigan Mallard in the evening that had been on the wing that morning and struck from the sky by my own hungry hands. Together, though, we have suffered this exercise to most clearly illustrate how in the wake of tragedy the mother of all amendments has vanquished every other word and punctuation mark in our national charter. How 300-odd million precious personal objects killing 614 people per week give so many not a care in the world or an inclination to look to reason and humanity and common sense gun safety. And how the deaths of four in Boston can cause so many of our leaders to tingle at the degradation of our entire way of life for the sake of our guns.