The Agony And The Ecstasy: Detroit To Rome In 1,000 Words 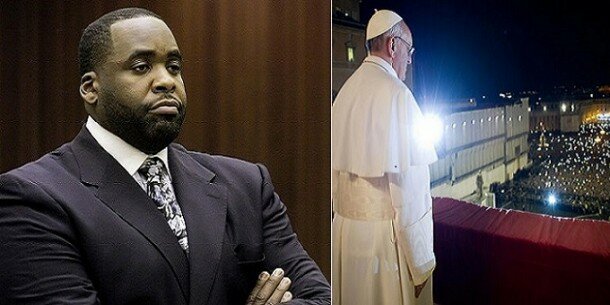 On March 11, Detroit’s former Mayor, Kwame Kilpatrick, 68th man to hold said office, was found guilty of 23 federal criminal counts, including the 20-year-felony of racketeering; noting ‘detention is required in his circumstance,’ Judge Nancy Edmonds blocked the hubris-hurling Mayor from passing go, and sent him straight to jail pending sentence. 5,000 miles away and 48 hours later, the College of Cardinals in Vatican City, Rome, named the most holy and humble Jorge Mario Bergoglio of Buenos Aires, Argentina the 266th successor to St. Peter. Both cities are on rivers. Coincidence? I don’t think so.

The Bows Are Drawn
Kwame Malik Kilpatrick was born June 8, 1970 to career machine politicians Carolyn Cheeks Kilpatrick and husband Bernard, blossoming quickly to a considerable 6’5” and a near quarter-ton in girth. The future Mayor attended the famous Cass Technical High School, notable for such alums as Diana Ross, Lily Tomlin, Jack White and, of course, fellow ersatz felon John DeLorean.

In remotely similar fashion, Pope Francis was born to Italian parents in Buenos Aires, with a railway worker dad and a housewife mom, though it should be noted that as a boy the Pope loved the San Lorenzo de Almagro football club whilst the Mayor played for the Florida A&M Rattlers in college. That much is clear.

The Mayor was elected to serve in the Michigan State House of Representatives in 1996, simultaneous with his ostensible attendance at the Detroit College of Law, and in some room somewhere between Lansing and Detroit it was somehow decided that the 20-something-year-old young man had the brains, brawn and brawn to be the future steward of the 18th most-populous and crumbling city in the US. And thus, the anointed and enormous man-child won election handily in 2001.

Again, a similar 5,000 miles away in Buenos Aires that same year of 2001, at the consistory, Archbishop Bergoglio was created a Cardinal by Pope John Paul II and assumed positions under the Roman Curia in the Congregations for Divine Worship and Discipline of the Sacraments and Institutes for Consecrated and Apostolic Life, among others. Seeing the pattern here?

The Arrows Fly
At his inauguration, the self-proclaimed ‘Hip-Hop Mayor’ spoke volumes to an adoring crowd, stating “I stand before you as a son of the City of Detroit and all that it represents . . . .This position is personal to me. It’s more than just politics.” The Mayor promptly made good on his words, using public funds to lease a fleet of cars for his family’s personal use and charging some $210,000 in personal massages, trips, dinners and personal vintage wines on his city credit card. Still merely getting warmed up, alleged transgressions of Kilpatrick and associates in subsequent months and years included but were not limited to: the Manoogian Mansion stripper party; the Tamara Greene murder; assault of a police officer; the Synagro Sludge scandal; whistle-blower and slander suits; directing grant money, contracts and jobs to friends and family; obstruction of justice and abuse of power.

Notwithstanding the sting and stigma of many of these apparent sins, in 2005, 53% of Detroit’s electorate – Catholics, Baptists, Jews, Muslims and the like – chose to forgive the Hip-Hopping servant of the people and treat him to a second term he would never finish.

Meanwhile in Buenos Aires, Cardinal Bergoglio became known for social justice, human rights, doctrinal conservatism and humility, rejecting the trappings of office and living in a simple apartment, cooking his own meals and taking the bus. He reached out to Jews, Muslims, Protestants and anyone who required the pastoral touch of this seemingly sincere Jesuit. The same year of the Mayor’s re-election, the Cardinal was the runner-up in conclave voting which awarded the keys of St. Peter’s to Pope Benedict XVI.

The Much Larger Of Two Arrows Drops With A Thud
While signs and wonders of divine arrogance, narcissism and grandiosity occurred near to the promising political giant on an hourly basis since birth, the Mayor’s ultimate undoing resulted from his reckless sowing of the seeds of human frailty like so many thousands before him. In defending themselves against a civil suit brought by fired police officers, Kilpatrick and his chief of staff and high school chum, Christine Beatty, emphatically denied a years-long extramarital affair under oath, only to have the smoking gun of some 14,000 steamy Sky-Tel ‘sext’ messages pop off in the press and depositions of others. Years of denials, defiance, defamation of enemies, demagoguery and shameless race-baiting rang in the ears of millions of Metro Detroiters fed up with the nation’s first and possibly last Hip-Hop Mayor, as catcalls for his resignation echoed down Detroit’s desolate and dangerous streets.

In 2008 the pair were charged with a total of 12 state law criminal counts including perjury, obstruction of justice, misconduct in office and conspiracy; Kilpatrick ultimately copped to two counts, with the stipulation he pay back the City $1 million, surrender his law license, resign his office and refrain from further such ambitions for five years. Serving four months in jail up front, the Mayor repeatedly violated his probation through generalized intransigence and refusals to pay the restitution. Surprised by the Judge’s failure to see the divine signs and wonders, Kilpatrick found himself serving one-and-one-half to five years in prison. And it was during this second bit behind bars that the Mayor learned the feds were now in the hunt for public vindication and Old Testament retribution with an 89-page indictment that included those 23 counts Kilpatrick was so shocked to hear guilty verdicts on this week. 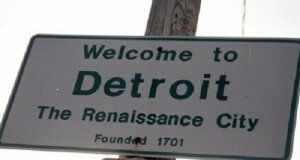 In Detroit, on a rainy night, folks are worn out, numb and without sufficient energy to strongly protest Gov. Snyder’s appointment of an emergency manager over the town that Kwame Kilpatrick so shamelessly exploited like a hungry parasite killing its own host. This indignity, countless millions pilfered and the irreparable degradation of our home town are the man’s wretched legacy. The remarkable Motor City, which had been known as the Florence of the Midwest and the envy of Chicago at the dawn of the 20th Century, is all but dead, a settlement of ashes from which no phoenix shall ever rise again.

Meanwhile in Buenos Aires, Rome and anywhere you might find any of the world’s 1.2 billion Catholics, faith, joy and peace are in abundance. According to St. Ignatius, the critical exercise in Jesuit spirituality is ‘to conquer oneself and to regulate one’s life in such a way that no decision is made under the influence of any inordinate attachment.’

If only Kwame Kilpatrick had been a Jesuit, and had skipped the Escalades in lieu of the buses, I may have spared us all from this tale of agony, taking my respite in a city of hope and ecstasy. If only.