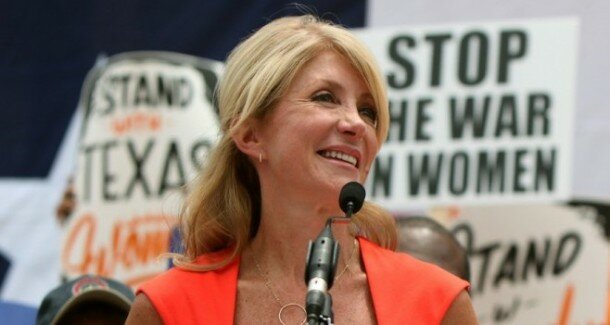 If State Senator Wendy Davis’ 11-hour Texas filibuster in the defense of every woman in all 50 states means anything, it is that reason, reach and well-regulated rage can combine as a bulwark against the stupidity, misogyny and perfidy practiced in most state house GOP caucuses these days. And like always, Texas does everything bigger. So then, let’s take a gander at the dust-up and what it means for women’s privacy in general, Rick Perry’s future in specific, and the good and evil lurking in all 50 little constitutional laboratories we call states.

That Ain’t No Way to Treat a Lady

The storm that hit Austin on June 25th did not come without warning. You see, the previous Friday, despite a citizens’ filibuster that lasted to 3:45 a.m., the good Republican men and women of the Texas House of Representatives managed to pass an anti-abortion bill that would confine any abortion to 20-weeks gestation, prohibit any medication-induced terminations, regulate all clinics as if they were surgical centers and basically reduce the number of provider locations by 89-percent. If said bill’s enacted into law, five clinics would remain to service a state with a population of 26 million.

Now for those of you who are fervently pro-life, and perhaps others who just don’t get what all the hubbub is about, a brief rejoinder. You see, in a Republic crawling from the ashes of a greed-and corruption-fueled financial meltdown and the two longest wars in our history, one would think top of mind topics and public policy debate would cluster near jobs, education, infrastructure, financial regulation and tax fairness; alas, despite attempts at re-branding, so many GOP-types just can’t shake the often-creepy obsession with God, guns, gays and vajayjays.

So when this bill headed to the reliably right-wing Senate, Wendy Davis announced to that same God and everyone that she would filibuster through the scheduled recess of the body, 13 hours if necessary, in order to protect a woman’s right to choose, at least until the next skirmish. Despite arcane procedural rules preventing personal hygiene, leaning, sitting, reading from notes and straying off topic, Wendy Davis talked, and talked, and talked.

Desperately attempting to jam a stick in the spokes of her bicycle, GOP bullies brought a point of order for straying off topic, another when Davis was helped into a back brace, and a second relevancy motion that finally halted Davis on the one yard line after 10 hours of rhetorical running. From there, a combination of points of clarification and capacity crowd cacophony vexed the effete Lt. Governor David Dewhurst (R-Houston) until Sen. Leticia Van de Putte (D-San Antonio), having rushed back to the Senate from her Dad’s funeral, essentially crossed the goal line with the remark “at what point must a female senator raise her voice to be heard by her male colleagues?”

Despite notably despicable tactics including shutting down servers, modems, microphones and fraudulently back-dating the official Senate record, the forces of ignorance lay vanquished, at least for the moment.

The Yellow Rose of Texas

Since bursting onto the national scene, gubernatorial speculation surrounding Davis has been at fever pitch, and for good reason; this single mother of two is now the most popular politician in Texas, of any party. She’s smart, tough, and telegenic and her bona fides make Rick Perry look like the painfully complete fool that he is. Of course Rick Perry all to himself makes George W. look like Jonas Salk, so there’s that.

Wendy Davis was born in Rhode Island and relocated to Texas at age 11, worked the kinds of menial jobs teenagers used to work, graduated high school and found herself a single mom in a trailer at 19. Undeterred, she went from paralegal school, to a scholarship and honors at Texas Christian University, to Harvard Law School, to a legal career and the Fort Worth City Council, to the State Senate, and she now appears headed in the direction of the Perry residence even as we speak.

Less than 48 hours after the temporary defeat of the Texas bill, Gov. Rick Perry was snorting like a steer before the National Right to Life Convention, vowing to call a special session to obediently pass the law before the all-star break. And shockingly aware the Earth may be giving way beneath his cowboy boots, he opened fire on Davis, stating “Even the woman who filibustered the Senate the other day was born into difficult circumstances. She was the daughter of a single woman, she was a teenage mother herself. She managed to eventually graduate from Harvard Law School and serve in the Texas senate.”

Finishing his attack with class, Perry said “It is just unfortunate that she hasn’t learned from her own example that every life must be given a chance to realize its full potential and that every life matters.” Perry called the legislative episode an unprecedented example of mob rule and another Texas pol implied Davis was a terrorist.  Ah yes, calling your opponent a bastardess, vilifying her and turning logic on its head to shame her with the specter of her own possible non-existence . . . priceless.

These Boots Are Made For Walkin’

In the aftermath of the famous filibuster, while many are clamoring for Davis to take on Perry, or Republican State Attorney General Greg Abbott, or Chuck Norris, or all men in general, mathematical and political realities leave realists less than sanguine. Recent Public Policy Polling found Perry 20 points ahead of Davis and Abbott still a tough match with an eight-point lead. More shocking is the odd anomaly of Perry and Abbott leading Davis among women by six and five points respectively. What gives?

Stepping back from the map of all our 50 states for a moment, we find 24 majority GOP governments, 13 majority Democrat and 13 divided, and in most we see something missing from national politics for eons: legislative action. Alarmingly it is those bright red states where the action is fastest on issues including but not limited to guns, taxes, immigration, education, elections, gay marriage, school prayer, deregulation, privatization and yes, abortion. And yet every two years we must and will remain mindful that the entire checkerboard can be shaken to pieces to start again.

So fear not, for Wendy Davis truly won many large and small heroic victories with her bravery; she beat the bill, she raised her profile, her specter, the stakes, awareness and she reminded us all that David can be a formidable match for Goliath, that good can combat greed, that hope is greater than fear. Even if David’s a lady.