Terms of the New Abortion Bill Agreed by Irish Cabinet

Posted by Clarissa Frankfurt on Wednesday, May 1, 2013 · 3 Comments 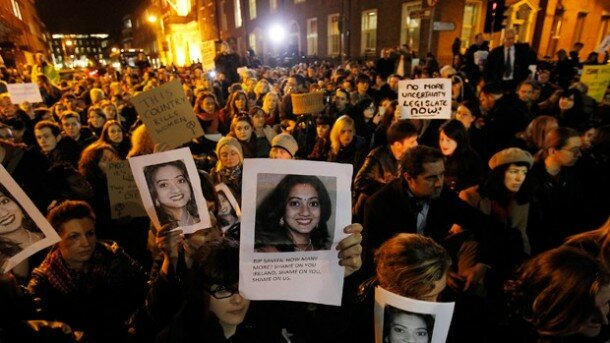 In Europe, Ireland is the country with the strictest abortion laws. Under the current law, abortion is a crime unless if it occurs as a result of a medical intervention performed to save the life of the mother.

Mrs Halappanavar, a 31 year old woman originally from India, was 17 weeks pregnant when she started feeling pain in her back and was bleeding. She sought medical attention and tests revealed that she was going through a miscarriage. Over the course of three days, she pleaded with her doctors to perform a termination. The doctors justified that they could still hear the fetus’s heartbeat and told her “This is a Catholic country”, meaning no abortions.

Following  a public outcry over the death of Savita Halappanavar in October, the Irish government decided to repeal legislation that says abortion is a crime, and came up with a new law titled “Protection of Life During Pregnancy Bill 2013”. New law determines when the doctors would be allowed to perform a termination if a woman’s life is at risk, including due to suicide.

The terms of the new bill states that three consultants would be asked to review a case and all must agree for a termination to proceed.

If a termination is not approved, the woman gets the chance to appeal to another panel of three doctors and they must also be unanimous for it to go ahead.

Critics of the law, anti-abortionists, say the law would lead to “abortions on demand.” But the Government sources told the Irish Times that the provisions of the bill had been made stricter for threatened suicide. They said that in effect terminations would only be allowed “to eliminate the risk of self-destruction” in the case of suicide threat by the woman and that would mean the proposed law did not lead to “abortion on demand.”

The Irish Council for Civil Liberties welcomed the decision. They called on the government to go even further and to make the termination of pregnancies involving fatal fetal abnormalities lawful.