Syria: U.S. Media Drops The Ball As They Did Just Before Iraq War 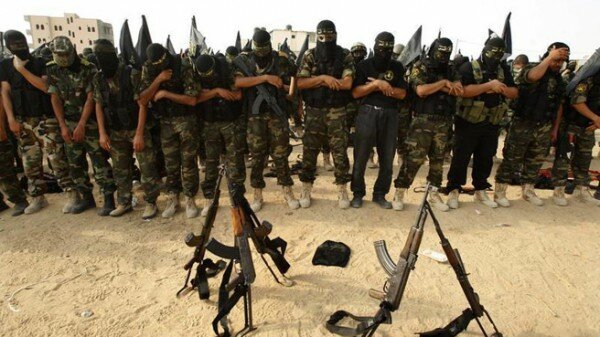 The know-it-all U.S. mainstream media are pushing a black and white narrative of an extremely complex conflict in the Middle East, again. Just as they did prior to the Iraq War, they are following the White House’s story of a “big, bad dictator, killing his own people with chemical weapons”.

The reasons for this shortfall of honest reporting vary from incompetence to laziness, but there could also be a more sinister agenda: helping the U.S. government to propagate its plan to either invade or intervene in Syria. After all, Americans will always be more sympathetic to victims who are suffering under a dictator than they will be tolerant of a direct war for, say, natural resource control or regime change to implant and prop up puppet governments to do the U.S.’s bidding in the region.

Here is one such example of how the media are getting it wrong. Below is a Facebook post by Richard Engel, Chief Foreign Correspondent for NBC News. On May 11, two car bombs killed over 40 Turkish civilians in the town of Reyhanli, located on the border with Syria. Mr. Engel, with his infinite wisdom and extensive journalistic experience, uttered this sentence on his post: “the assumption among people is that this was carried out by the Syrian government.” Few responded with criticism on his reporting. 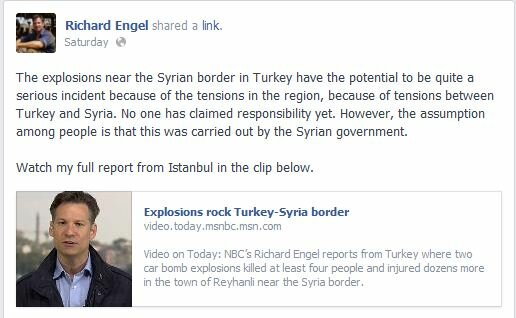 The problem with assumptions in news reporting is that they turn out to be mostly untrue. The Turkish people actually had no assumptions here, because unlike Mr. Engel, they knew what was going on. See, Reyhanli has been a host for many refugees from Syria and the town’s people, in their initial intent to aid these refugees, quickly learned the realities of the conflict. Because they actually talked to the refugees and interacted with them for months, they understood that the opposition groups – the so-called “rebels” – were not the innocent, democracy-seeking “freedom fighters” that the U.S. media has been trying so hard to portray them as.

If Richard Engel took the time to follow the Turkish media, he would know that Turks actually refer to the Syrian opposition forces as “terrorists”. Local news agencies also claim that the refugee camps are being used as training ground for the jihadists against the Assad Government. Right after the bombings, the townspeople were on the streets protesting with large banners that said “We will get rid of the Jihadist murderers from our town!”. Of course Mr. Engel and NBC News either did not see this, which was pervasive in Turkish news and reporting, or simply ignored it because it conflicted with the tale of “freedom fighters supported by the U.S., fighting against the big, bad dictator, Assad.”

Even common sense goes against Engel’s “assumption”. Assad has enough problems on his hands – why would he want to provoke Turkey into a war? Especially knowing that Turkey has a powerful, well trained, U.S.-style military. Who would benefit the most if Turkey attacked Syria and topples Assad? It is no secret that the Turkish government is a puppet for the U.S.; or, if you want to say it in a more diplomatic way, “a long-time ally of the United States.” Hence, Turkish PM Erdogan, on the recent bombings, claimed immediately that the bombers were more likely Assad’s people – a total contradiction to what the people of Reyhanli were and are saying. What Erdogan is perpetuating is the exact same story the U.S. wishes to disseminate.

Of course, this report would be silenced so long as the U.S. is openly supporting the opposition. Information on the opposition also is vague and shallow. Because dare I say, the opposition is actually full of jihadists, from direct Al Qaeda links to its factions Al Nusra, as well as some Kurds and grassroots opposition activists….the list goes on and on. More formally identified are the Syrian National Council (SNC), Local Coordination Committees (LCC), Supreme Military Council (SMC) and Free Syrian Army (FSA). Each of these groups and factions are also fighting with each other. Think about the chaos.

So who are we supporting, really? If the U.S. is in a “war on terror”, with its goal of eradicating radical, jihadist Islamists, then why would we support Al Qaeda, our archenemy?

According to a report in Global Research, Al Nusra is largely made up of mercenaries recruited in Turkey, Saudi Arabia and Qatar. Confirmed by CNN, the Syrian opposition have been trained in the use of chemical weapons by Special Forces on contract to the Pentagon.

Dear Richard Engel and the rest of the U.S. mainstream media……When will you start doing your real job and investigating these leads? Or, will you continue to stick to the script: “Big, bad dictator oppressing his own people. Freedom fighters are good, as long as we support them”?

Update: Erdogan’s administration issued a broadcasting and publishing ban to all Turkish media outlets about the bombings, claiming families of the victims need peace from the media. A full scale censorship, because they do not want independent media to uncover what local Turks already know, jihadist opposition forces are behind the bombings.