Posted by Clarissa Frankfurt on Tuesday, April 23, 2013 · Leave a Comment 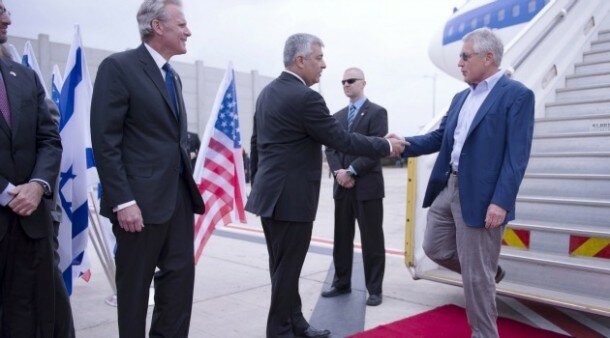 Only two days after the Pentagon mentioned that it was finalizing a $10 billion arms deal with Israel and two of Iran’s main rivals – the United Arab Emirates and Saudi Arabia-, in order to strengthen their military, Chuck Hagel arrived in Israel on Sunday on his first visit there as a U.S. Defense Secretary.

Asked if the arms deal sent a message that the military option was on the table if Tehran moved to build a nuclear weapon, Hagel said: “I don’t think there’s any question that’s another very clear signal to Iran.” He added, “The bottom line is that Iran is a threat, a real threat.”

While Hagel said, “the Iranians must be prevented from developing that capacity to build a nuclear weapon and deliver it”, Iran has consistently denies the allegations coming from the West that it is seeking to build nuclear arms, arguing that its efforts in this area aim at electricity generation.

Today, Hagel is due to meet Israeli Defense Minister Moshe Yaalon and on Tuesday a meeting is scheduled with Prime Minister Benjamin Netanyahu. Israel and the United States have both said that all options will remain on the table when it comes to dealing with any nuclear threat.

Hagel has said that the arms deal was a continuation of U.S. policy to maintain Israel’s “qualitative military edge” in the region, adding that the military option had been “very clear to Iran for some time”.

Israel has time and again voiced impatience with diplomatic efforts trying to curb Iran’s enrichment of uranium. They argue that these efforts should be coupled with a credible military threat. Israel is broadly believed to be the only nuclear power in the Middle East.

Questions were asked about continued debate in the Israeli media that Israel might have to strike Iran by itself. Hagel responded by saying, “Iran presents a threat in its nuclear program and Israel will make the decisions that Israel must make to protect itself and defend itself.”

Hagel was sure to stress that the United States believes diplomacy and tough international sanctions can still have an impact on the situation. “The military option is one option that remains on the table, must remain on the table. But military options, I think most of us feel, should be the last option” he added.

Amid concerns about regional stability due to Iran’s nuclear program, the shaky transition to civilian rule in Egypt and the civil war in Syria, Hagel is still scheduled to visit Egypt, Jordan, Saudi Arabia and the United Arab Emirates.