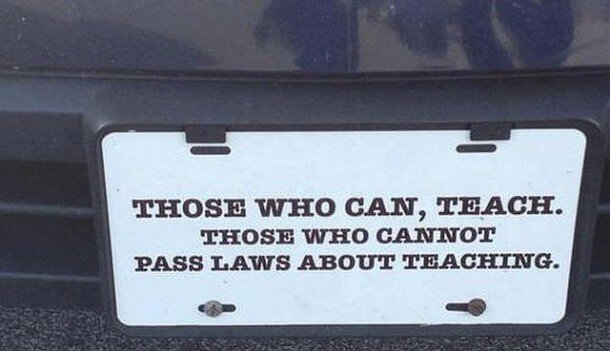 School reform has gone back and forth for over a century and a half, between the 19th century, Prussian military-industrial model to Dewey’s individualized, “special snowflake” philosophy and back again to factory- and business-preparedness treatment of children. Because neoliberalism is the winning philosophy at the moment, the worth of schools is tied to how well they can churn out identical cogs to plug in to the economic machine. Schools around the country have begun boycotting standardized testing as a response to this trend.

In the Johnson Administration, it began to come to light that children in impoverished areas or minority groups were lagging behind their wealthier peers academically. In an attempt to remedy this, the Elementary and Secondary Education Act, of 1970. Its most famous component, Title I, was implemented with the intent to give extra resources to those schools that were in higher need.

No Child Left Behind, the re-authorization of ESEA under George W. Bush, changed the rules a bit: instead of getting extra resources because students had special needs, schools would lose resources, even endure shut downs, if their students did not get high enough test scores, regardless of whether the students’ scores improved. Teachers are required to obtain certain levels of training and education, while simultaneously being told that their jobs depended on their abilities to get children to meet arbitrary benchmarks. The intent was to provide for the “accountability” of teachers.

This type of high-stakes testing does not allow exceptions to its numbers-based scheme. Students with disabilities, students in poverty, migrant and transient students, and recent immigrants who don’t speak English are all required to perform at the same level on the same tests as the upper-class English-speaking kids with the private tutors.  Teachers are expected to perform miracles.

A major argument in favor of standardized testing is that it can theoretically be used to evaluate teacher effectiveness. However, teachers have not been shown to have a significant impact on test scores when compared to other influences in their lives. In a 2010 briefing paper by the Economic Policy Institute, a group of respected scholars point out what should be obvious to everyone:

“Social scientists have long recognized that student test scores are heavily influenced by socioeconomic factors such as parents’ education and home literacy environment, family resources, student health, family mobility, and the influence of neighborhood peers, and of classmates who may be relatively more advantaged or disadvantaged.  Thus, teachers working in affluent suburban districts would almost always look more effective than teachers in urban districts if the achievement scores of their students were interpreted directly as a measure of effectiveness.” (EPI, p. 8)

This process costs an estimated $1.7 billion just for the administration and grading of the tests by private companies. Such a reduction of children and educators into a narrow set of quantitative measurements that are known to be meaningless would be laughable if it weren’t so damaging.

This focus on standardized testing has disastrous effects on children and on the effectiveness of the educational system as a whole. On top of the weeks of testing that take away from instruction time, teachers are expected to “teach to the test” for the rest of the year, often to the detriment of locally-approved curriculum.  It dumbs down school subjects, distilling them the artificial and simplified rubrics that will be on the test.

Basing school and teacher evaluations on inaccurate measurements like these penalize already systematically under-funded schools by further denying them funding, in effect punishing them for having populations with higher need. Even more cruelly, certain Republican politicians are now trying to tie families’ welfare benefits to their children’s school performance: grades, and standardized test scores. Children already experience terrible stress in the face of these high-stakes events. I know from personal experience that there are children who have attempted to injure themselves to avoid the test or who have become violently ill prior to or while taking it.

We have seen more than enough evidence that nation-wide, high-stakes testing does not do what it is intended to do. It is causing more harm than good. If we really want to level the playing field for our children, we need to listen to the professionals who educate them, rather than the politicians who judge them. Most urgently, we need to address the inequalities children bring with them to school.