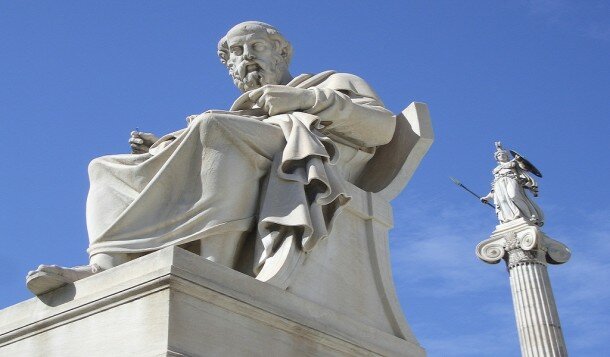 While baseball begins in about a week, and the Standard & Poor’s is tipping an all-time high, millions of eyes, gay and straight, devoted, detached and disgusted, are peering instead at the United States Supreme Court, that institution representing the first among equals in our three-branch Republic. As we can’t expect rulings on the marriage equality cases before the Court this week until sometime shortly before the All-Star break, the following will optimistically serve to gently prognosticate and bring some order to what gives in the Court.

Here Comes Old Socrates
Socrates haunts every courtroom, law school and kitchen table the world over, though his presence here is ironically not due to accusations he was a homosexual pederast, but that the Socratic Method is the font of all Western legal and rhetorical study. Period. So what the hell is it?

The Socratic Method is a dialectical form of inquiry and debate between folks wherein the defense of positions are pitted against one another and one party will induce the other to contradict, confuse or otherwise make a jackass of themselves in front of God, judges, profs, family, friends, fellow students and the like – to the mortification of the victim. It’s invention is responsible for democracy in general, the United States in particular, millions of flunked-out law students, it’s often quite violent in a non-contact, linguistic sort of way, and it really works.

So then, when 2010 Republican Lawyer of the Year, Huntsville, AL native and defender of the faith Charles Cooper attempted to open his remarks Tuesday with some gingerbread and filigree, he ran smack into Chief Roberts’ form of the method. Unceremoniously interrupted after a couple dozen words, Roberts swatted the appellant stating “Mr. Cooper, we have jurisdictional and merits issues here. Maybe it’d be best if you could begin with the standing issue.” Snap!

Standing For Fun and Profit
Basically, what Justice Roberts was getting at is akin to a sentry asking one to state their business and why they’re allowed to speak at all, and can play the deuce with litigants by barring them at the door and permitting the Court to skip the hard part altogether. So with Cooper already being painted into a corner Justice Kagan, who endeared herself at confirmation with remarks about Christmas Day, Chinese restaurants and American Jewry, continued the mild torment.

As Cooper is essentially a non-sanctioned, un-elected top-gun hired by five self-righteous California busy-bodies to defend the State’s invalidated gay marriage ban, Kagan rightly inquired if any regular beltway millionaire hot dog lawyer can waltz into the SCOTUS and defend an infirm law when the state’s own officials have stood pat. “It’s by no means the question before the Court,” replied Mr. GOP Fancy Pants, winning no friends through this disrespect, and likely inviting further Socratic salvos.

Merits, Demerits and the Abiding Connection to Historic Traditional Procreative Purposes
In an apparent effort to help out the hapless Mr. Cooper like a Seventh-Grade drama teacher, reliably stodgy Justice Antonin Scalia tried feeding Cooper lines about child-rearing, adoption, and the deleterious effects of same-sex parentage on unsuspecting children liberated from orphanages and maternity wards. Sadly, this served to lead Mr. Cooper into further piles of legal doggy-doo.

Responding to a demure yet purposeful Justice Breyer, Cooper went for broke stating “The concern is that redefining marriage as a genderless institution will sever its abiding connection to its historic traditional procreative purposes, and it will focus, refocus, the purpose of marriage and the definition of marriage away from the raising of children and to the emotional needs and desires of adults, of adult couples.” It almost sounded as if childless adult couples of any orientation were up to no good at best, and at the devil’s dirty work generally.

And here’s where Socrates’ ghost screams boo as Justice Kagan struck like logical lightning, noting that by Mr. Cooper’s own rhetorical construct, heterosexual couples in their 50s and beyond conventional child-rearing years should not be permitted to marry, “Because that’s the same State interest I would think, you know? If you are over the age of 55, you don’t help us serve the government’s interest in regulating procreation through marriage.” In a last ditch desperate maneuver, Cooper blurted “Your Honor, even with respect to couples over the age of 55, it is very rare that both couples, both parties to the couple are infertile”—(Cascading Charlie Brown Classroom Laughter Rings Throughout Courtroom). When Kagan underscored Cooper’s regretful absurdity, his day was over.

And the Winner Is . . .
Arguing the case for same-sex couples was the enigmatic Ted Olson, he of filthy anti-Clinton opposition research, declarations of questionably clean Bush elections, former Solicitor General for W and widower of a beloved 911 Pentagon crash victim. Teaming up with his Bush v. Gore nemesis David Boies, on behalf of justice for all, Olson hit as much interference as Cooper, but outclassed his opponent in both style and substance. Scalia tried to play gotcha, asking, “When did it become unconstitutional to exclude homosexual couples from marriage?” An unrepentant Olson shot back “When did it become unconstitutional to prohibit interracial marriages?” And after further prodding, stated the legally obvious “There’s no specific date and time. This is an evolutionary cycle.”

The likely rulings? The DOMA oral arguments may further inform prognostication, as Kennedy appears to be swinging with the “liberal” block, and DOMA Plaintiff Edie Windsor related “I think it went beautifully. . .The Justices were gentle. . . .” On Tuesday Justice Sotomayor summed up the issue nicely, asking “Can you think of any other rational basis, reason, for a state using sexual orientation as a factor in denying homosexuals benefits or imposing burdens on them?” My hunch is that given the flimsy standing of the House Republicans, who spent $1.5 million of our money to defend a puritanical DOMA  law most Americans think is arcane, the Court may dodge the question, finding no standing in either case. That way everyone wins, like in Tee-Ball, and no one’s feelings are hurt. Too much.

Disclaimer: Bill Urich is not a constitutional scholar but has played one for 23 years in various trial courts in the State of Michigan.