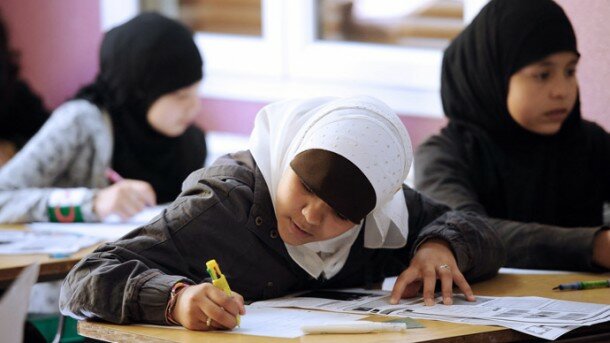 RT reports that a branch of Russia’s Supreme Court has rejected an appeal by a group of Muslims for the right of schoolgirls to wear traditional religious attire, specifically the hijab, in classrooms.

The controversy over the hijab started in October, 2012, when a head teacher of a school in the village of Kara-Tyube in Russia’s Stavropol region banned five Muslim girls from attending classes while wearing a hijab. Several Muslim girls of different ages were told they would not be allowed to enter the school unless they took off their hijabs.

School principal Marina Savchenko said that wearing a hijab violates school policy which requires students to attend classes in secular clothes. She also added, “We didn’t insist that the girls shouldn’t wear hijab at all, but suggested they replace it with a headscarf while in class.”

Angry parents filed suits at the district prosecutor’s office, claiming that the school had violated their constitutional rights to education and freedom of religion.

The case went all the way up to the Supreme Court, but on Wednesday their appeal was turned down. At the session, the representative of the Stavropol administration reiterated the position that the school regulations concerning dress did not prevent Muslims from believing in God and were therefore not infringing anyone’s rights.

According to the RT report, the defense team said they would now appeal the case in the Supreme Court Presidium, the final right of recourse within Russia. They also noted that it was unlikely that they would turn to the European Human Rights Court as they expected it to take the side of the regional authorities.

The report says, the majority of the Stavropol Region’s about 280,000-strong population is comprised of ethnic Russians who are Orthodox Christians. But in recent years more and more Muslims from neighboring North Caucasus republics have been settling in the area and many Russians are leaving for central regions.

Earlier, the ban on religious clothes in schools was also introduced in the Muslim-dominated regions of Bashkiriya, Adygeya and Dagestan, but the Muslim population chose not to protest against these rules in those areas, at least for now.