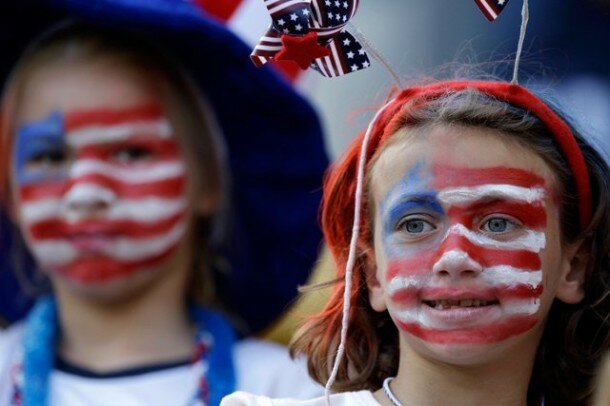 A friend of mine was upset the other day, because her best friend accused her of being unpatriotic in the political commentary she posts on Facebook.

She was told, in essence, that America is the greatest country on Earth with more freedom than any other country and that anyone who complains about America is not a loyal, patriotic American.

I have a very different perspective. I think the suggestion that it’s somehow unpatriotic to discuss problems with America is itself unpatriotic. It is our love of country that makes us point out what is wrong.

The Loyalists believed it was wrong to criticize the King or complain about the country. They believed they were citizens of the greatest country on Earth and that anyone who disagreed was unpatriotic. Loyalists believed that if you weren’t happy with the way things were, you should shut up or go somewhere else.

The Patriots, on the other hand, loved their country but not their King. They pointed out serious problems which would require significant changes to remedy. When things kept getting worse and there was no solution in sight, the Patriots eventually sought independence from Great Britain. We now refer to them as our Founding Fathers.

Today, the people who say you must not complain because America is the greatest country on Earth are comparable to the Loyalists, not the Patriots. They would rather spout tedious platitudes about how America enjoys greater freedom than any other country on Earth despite growing evidence that this is no longer true.

The millions of Americans who believe that America has lost some of its greatness over the past 30 years are no less patriotic than anyone else. Quite the opposite; I think those who point out serious problems that need to be addressed are probably the most patriotic people in the country. As Thomas Jefferson once said, “Dissent is the highest form of patriotism”.

It is the height of patriotism to point out that in the past 30 years during times of economic growth, the vast majority of new wealth generated went to the wealthiest 2% of Americans while the middle class has seen almost no economic improvement. It is extremely patriotic to mention that according to the World Health Organization, the United States ranks 37th in the world, right behind Costa Rica, in overall health care outcomes.

I consider it highly unpatriotic to ignore problems like these. What makes America great is our ability to see a problem and to enact changes in order to solve that problem.

There is a famous quote that is often repeated as “My country right or wrong”, by the Union Army General Carl Schurz.  Many people interpret this to mean you must not criticize or find fault with America. This is what defines patriotism to many Americans.

But the actual quote is “My country right or wrong; if right to be kept right; if wrong to be set right”.

Love of country does not mean blindly supporting the status quo. It does not mean denying that we have problems. True patriotism means pointing out what is wrong in your country so it can be made right again.