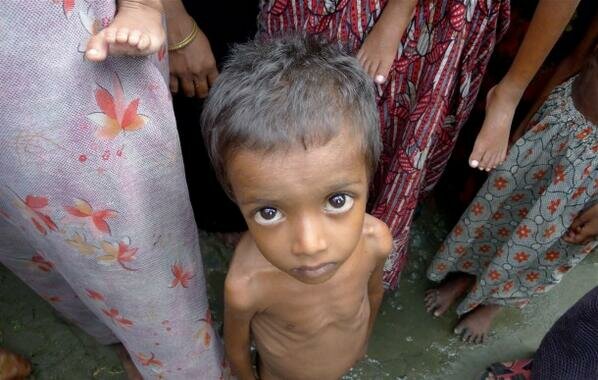 (Author’s Note: Over the past month, violence and ethnic cleansing has wracked the Southeast Asian nation of Myanmar, also formerly known as Burma, leaving thousands displaced and hundreds, possibly thousands dead. Though conventional media have been largely lax in their coverage of it, the independent media, such as The Progressive Press and Vice, with the help of bold journalists in the field, as well as networks such as EndGenocide.org, Anonymous and SavetheRohingya, have managed to bring greater attention to the plight of the Rohingya, as well as ethnic Muslims throughout Myanmar. We will continue to cover the story as it develops, as well as provide resources for you, the reader, to take action on, to help demand attention and an end to this senseless violence. Follow the links provided here for sources and resources to get involved and help us bring this madness to its end.)

Helicopters, smoke, fire and panic. That is the scene in the Burmese town of Sittwe today, as described by Assed Baig, who is on the ground in Myanmar, covering the ongoing violence. As his and other reports trickle in, the direness of the situation continues to evolve, with reports now indicating that the ALA (Arakan Liberation Army) in Rakhine region is planning to move for an independent Rakhine state. This would further endanger the already “stateless” Rohingya people, as the ALA is commonly regarded as a “neo-nazi” or “terrorist” organization, bent on eradicating Myanmar’s Muslim minorities.

Throughout the week reports have continued to leak out of Myanmar regarding the escalating daily violence against minority Muslims by Buddhist mobs. Initially focused on the Rohingya, the mob violence has now spread further throughout the country with attacks coming against other ethnic Muslim tribes as well as to those simply appearing to be of Indian or Southern Asian dissent.

Journalists following the violence on the ground, have reportedly been subject to threats of violence by monks demanding the cameras, memory cards and recording materials used to document the ongoing rioting. While attempting to cover the events which unfolded in Meiktila this week, an AP photographer claims to have been threatened with a foot long dagger by a Buddhist rioter who demanded his camera’s memory card. Similar claims have also been made “The Irrawaddy” and “Democratic Voice of Burma” news outlets. Other independent journalists who traveled to Myanmar to cover the story, have also reported on the threats and dangers posed to them by the roaming mobs.

Following a series of “Twitter storms” by Anonymous and other groups, media coverage in the West has picked up. A recent article by Vice highlighted these cyber organizing techniques, reporting that in a period of one hour, the hashtag #RohingyaNOW jumped to 24,000 tweets worldwide. Though not numbering in the millions, as are sometimes enjoyed by pop culture or celebrity trends, this online push, coupled with the shutting down 14 Myanmar government websites through denial of service attacks, allowed Anonymous to bring this largely disregarded issue to the Western public.

CNN, NPR and the BBC have all since reported on the violence, though whether this is a result of the online activism is unclear. Regardless of its source, the mounting pressure on media and government officials the world over, is beginning to take effect. In a speech made on Thursday, Myanmar President Thein Sein directly addressed the waves of violence that ripped through the town of Meiktila and throughout other areas over the past week. In what many are hoping is a legitimate pledge to end the violence, Sein issued a warning to the organizers of the violence, saying:

“I would like to warn all political opportunists and religious extremists who try to exploit the noble teachings of these religions and have tried to plant hatred among people of different faiths for their own self-interest: their efforts will not be tolerated. We will take all necessary and effective action to stop their operations in accordance with our Constitution and our existing laws. All perpetrators of violence will be prosecuted to the fullest extent of the law.“

Sein’s statement however, was tempered by further acknowledgment that during what is being called Myanmar’s “period of democratic transition,”  tensions are likely to remain. He went on to call upon the people of the nation to rise above the ethnic conflicts and old grudges: “We must expect these conflicts and difficulties to arise during our period of democratic transition. With a united effort, we must face and overcome these challenges together. As we rebuild our society, we must rise above decades of historical bitterness, confrontational approaches, and a zero-sum attitude in solving our differences. I want to call on all citizens to rise above the old ways of doing things and bring together our diverse backgrounds and chart together a path towards a new kind of society, based on mutual respect, democratic deliberation and consensus-building, to solve the challenges we face and will continue to face during our historic transition.”

Indeed, Burma/Myanmar as a nation faces a myriad of challenges in regards to its “opening up” to the world. Western diplomats and officials have begun chiming in as well, including the U.S. State Department’s Special Representative and Policy Coordinator for Burma, W. Patrick Murphy. In a released video statement, Murphy echos President Sein’s sentiment stating:

“First it’s important to recognize the progress that has been achieved on human rights. For the better part of two decades, human rights was the core of our Burma policy. And indeed over the last two years, this government has answered and responded to international concerns, including those of the United States, by releasing political prisoners, opening up basic freedoms—of speech, assembly, and a right to form worker unions, for example.”

However not everyone believes that this “opening up” of the country is focused on improving conditions for the people. As attention to the ethnic violence and forced displacement by press and authorities of the West comes about only marginally after decades of conflict, the primary focus of the powerful remains largely on the economic developments. Many Western banks and financial institutions, as well as Chinese petroleum giant PetroChina, maintain significant economic and financial stakes in Burma’s development.

As development of the highly controversial Shwe Pipeline continues, human rights and environmental watchdogs have kept a keen eye on PetroChina and its involvement.  In 2012, the Norwegian government opted to divest $90 million from PetroChina, which it had invested as part of the “Norwegian Government Pension Fund Global.” The divestment came after the company and its involvement in Burmese energy was found to have seriously contributed to widescale human rights abuses.

The pipeline currently under construction, is already drawing comparisons to the infamous “Yedana” pipeline, in which forced slave labor was used for construction while Western dollars flooded the country. California based UNOCAL and the French company Total S.A. maintained the contracts with Burmese officials, despite their well documented and regular human rights abuses.

Many scholars and civic leaders throughout the world who’ve studied the world’s difficult and dire struggles and history, have been quick to make comparisons to the genocide in Rwanda, leveling much of the blame for modern sectarian and ethnic tensions on historically rooted segregation resulting from foreign colonial rule. Burma as a nation, was under British control until 1948 and like Rwanda, endured considerable ethnic and racial division under rule of their foreign imperialists.

With roving mobs of armed Buddhist radicals, such as the now greatly notorious “Neo-Nazi” group 969 continuing to burn and destroy homes and places of worship, and maintaining an ongoing propaganda campaigns against the Muslim minorities such as Rohingya, these comparisons are not far off. In recent years, these campaigns have led to thousands fleeing the country, with Bangladesh presently hosting 200,000 refugees. As the violence continues to escalate, these numbers as well as death tolls, which presently are estimated to be in the thousands, are expected to climb even higher.