Poisoned US Soldiers, Secretary of the Army and KBR 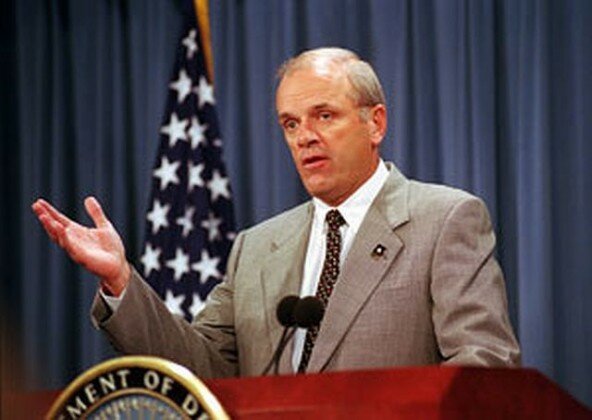 In November, 2012, an Oregon jury found Kellogg, Brown and Root (KBR), the military’s largest contractor, guilty of poisoning a dozen of US soldiers who were stationed at the Qarmat Ali water treatment center in Iraq, after the 2003 invasion.

The court ordered the company to pay $85 million in damages. Jurors found KBR knew the presence and the toxicity of the chemical that poisoned the soldiers.

According to a new report in Huffington Post, KBR has requested US Army to sign an indemnity agreement, protecting KBR from any potential legal liability, as part of its contract to rebuild Iraq oilfields destroyed in the U.S. invasion.

Then Secretary of Army, Thomas E. White, a former Enron senior executive, signed the agreement without any hesitation or changes on March 19, 2003. White resigned a month later, on April 23, after disagreements over former Defense Secretary Donald Rumsfeld’s advocacy for a multi-billion dollar artillery system.

KBR now says taxpayers should pay the $85 million in damages and more than $15 million the company has spent in its failed legal defense, basing their rights on the indemnity agreement that was signed between the company and the US Army.

Huffington Post obtained the court documents and the indemnity agreement that were classified as secret until December, 2012, through a Freedom of Information Act request. The report says how many other defense contractors have secret indemnification agreements with the government is not known.

White wrote in his 2003 memo granting KBR the indemnity that he did not have any idea how much the indemnity agreement could cost taxpayers. He did not respond to HuffPost’s request for comment.

White was also investigated in 2002, for personal use of military aircraft, charged with improper communications with Enron executives regarding personal stock trades and was called to testify before the Senate on his involvement in the Enron’s manipulation of California energy prices. He was the head of Enron division believed to have rigged California’s energy supply to inflate profits and cheat investors.

White is currently a managing partner at DKRW Energy, another energy company –not affiliated with Enron- claiming to be committed to exploring new sources of clean and commercially viable energy.