Of Massachusetts And Men: The Burial of Tamerlan Tsarnaev 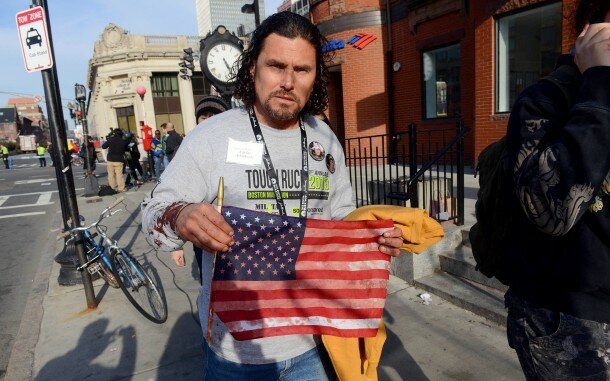 I realize that, by writing this, I am bringing unnecessary tsuris into my life. So be it.

Since when did we become a gaggle of punk haters (read: not punk-haters)? If I understand this correctly, many of you would like to have the body of Boston Marathon bomber Tamerlan Tsarnaev “fed to the sharks” or “mutilated….desecrated” or “incinerated” or “shipped to Russia”. Are we in agreement so far? OK.

I’d like to know what I’m missing here because I don’t think this is how we, as Americans, behave. This is not how we treat the dead; yes, even that dead guy. But the cacophony of hate is growing louder by the minute – much of the noise coming from those who don’t know the basic difference between Arab and Muslim or Chechnya and The Czech Republic; or from the likes of the insidiously hateful Ann Coulter, who said that Tsarnaev’s wife “ought to be in prison for wearing a hijab” and that “we need better immigrants”. [Dear Ann, you see the photograph above? That’s what an immigrant looks like. He’s also a hero and a First Responder.]

So I have to ask: is this really what you want? How you feel? Because I can tell you for sure – it is not what Boston wants.

As my timing would have it, I was traveling on the East Coast during the week of the Marathon attack. I arrived in Boston not two days after the bombings, when there was much uncertainty and tension, and I was ultimately stuck in lockdown just like everyone else. I stood three feet from Governor Deval Patrick on the day the FBI released the brothers’ photographs and heard him answer this question from a local reporter:

“Have you instructed officers to take them out, no matter what? Is this a shoot to kill situation?” A bizarre question, to say the least (and slightly ignorant as to government vs. law enforcement). Governor Patrick, impressive in his composure and decision-making that entire week (and since), sort of scrunched up his face and glared at the over-eager jerk asking him such a dumb thing. After indicating that BPD Commissioner Ed Davis, the FBI and other law enforcement personnel were ultimately responsible for “orders” as related to the manhunt and potential capture, Patrick’s answer came swift and strong; he was incredulous:

“Now why would we do that? We need to get information from these men, and I think that the people of Boston would agree, the priority is to find out who, what, why….to discover and understand as much as we can. One of these men is an American citizen. Both were assimilated into our universities.”

Now why would we do that? Exactly. Because this is America. And we are a civilized society. Depending on geography….

That week in Boston, I met the greatest people on the planet. No kidding. Salt of the friggin’ earth. No one – not one single Bostonian that I met and spoke with – wanted the brothers dead. They wanted answers, period. This included a freshly minted Bostonian, Adir, an Egyptian man who delivered pizza to us at our hotel because his restaurant was quite literally one of the only places still open during “lockdown” that Friday night. Adir was exultant when we met in the lobby just after police had taken Dzokhar alive. The bonding and celebrations were just sprouting up in Copley Square. He said to me, hurriedly, in his broken English “can you believe, they got him alive, I cannot believe, now we will know why.”

Beginnings of a memorial near site of first blast. Boston, 4/17/13

This included a wonderful, cherub-faced man named James. I met James in the Starbucks next to my hotel four days after the bombing (day one of the manhunt/release of photographs by the FBI). James’ face was badly bruised; one ear looked like it was terribly sunburned and/or bruised (I assumed later that it was a burn); he was visibly struggling and hobbling around on two crutches, his legs heavily bandaged. In full Celtics regalia – excited about the NBA playoffs, just days away – James, in his early 30’s, radiated light and happiness. Perhaps because he had survived being near the second Marathon blast. He had his limbs. He had his hearing, his sight. He was, in his words, “all good….so good”. “Hard part’s over. Just gotta get better. More thankful than I am lucky.” He also badly wanted answers.

As the manhunt for the younger brother, Dzokhar, consumed the Friday following the bombings, I heard many concerns voiced when dusk was about to settle – still no suspect – is he injured? Could he have bled out? That would be such a shame at this point. God, please let them find him, alive. This was the overwhelming sentiment. Overwhelming. We want him alive. We want to know why they did this. And how.

And when the 19 year old finally was taken – alive – bringing to a close a surreal, intense couple days, there was reason to love Boston and its people even more that night. The spontaneous lining of the streets, which broke out not just in Watertown, but anywhere people and pavement converged, was something special. No shit, I had a moment. I stood in the middle of dozens of people in the deserted, cordoned off Copley Square, Anderson Cooper and John King included, and I cried like a baby. How could this have ended so well? How did none of these officers get trigger happy and blow this kid to bits? How, how, how? And then I thought, how differently it could have – would have been – if, say, it had happened in Houston. Or New Orleans. It wouldn’t have ended well, trust me on that. No disrespect to the good people of the South. I am one of them, born and raised.

Boylston/Copley Square. Notice the 26.3 in the middle window above the street, marking 1/10 of a mile from site of finish line.

So this brings me to today, and the controversy over what to do with the body of Tamerlan Tsarnaev. Many like to say that we are no better than our foreign policy. Well….we certainly have a lot to answer for our drone program, for starters. We know now that our foreign policy, generally, the “wars” in Afghanistan and Iraq, yes, our drone killings, our blind ignorance toward (and hatred of) Muslims; The Patriot Act, Guantanamo – all of it – are given as reasons for the Boston attack.

When will we learn? We are fostering the birth of generations of those hostile to America. We must change this. Now.

We can learn from Boston. Not just “Boston”, the event of 4/15/13. I mean Boston. As in, the impassioned and resilient people of that city; its great leaders and law enforcement and emergency/medical personnel; the survivors of that horrible day. The first responders. I know that every time I feel myself starting to complain about something benign, I think now of James. I can’t say for how long that will last – hopefully it’s a permanent change – but I am so grateful to have met him and to have seen, first hand, how “this” – this loving your neighbor as yourself, this being the bigger person, this hope, faith, love, spirit, this Boston Strong – how it all works. And more importantly, that it can. That it is the only way to fly in the face of such tragedy.

Tamerlan Tsarnaev was a terrorist who killed 4 people and maimed, destroyed the lives of countless others. But he is gone. And to act the part of the savage, to say that we should dump his body into the ocean, what does that make us? Did we say the same for Timothy McVeigh? He too cited American foreign policy as the reason for what he did (in Oklahoma City). But he was white. Born American. Because the Tsarnaevs happen to be of Chechen descent, they deserve less in death?

This is not who we are. I refuse to believe it. We respect the dead in this country. And that includes Tamerlan Tsarnaev. The dead man. He is no longer a terrorist. He is a dead man; with a brother, sisters, a father, mother, wife and daughter who are grieving. However distasteful you may find this to swallow.

We know it because of how Governor Patrick handled this most delicate of matters. Specifically, as to what should become of Tamerlan Tsarnaev’s body:

“I don’t have a comment about that or a point of view. Like I said, this is a family issue, with due respect to all of you, and the family needs to make some decisions. I understand they have some options. They need to exercise one soon.”

The Governor also said that the fate of the body was not a matter for the state or the feds. Patrick said it belonged to the family.

“I think everybody is feeling upset about what happened. But we showed the world in the immediate aftermath of the attacks what a civilization looks like, and I’m proud of what we showed and I think we continue to do that by stepping back and let the family make their decisions”.

No more hurting people. And no time like the present to begin leading by example.