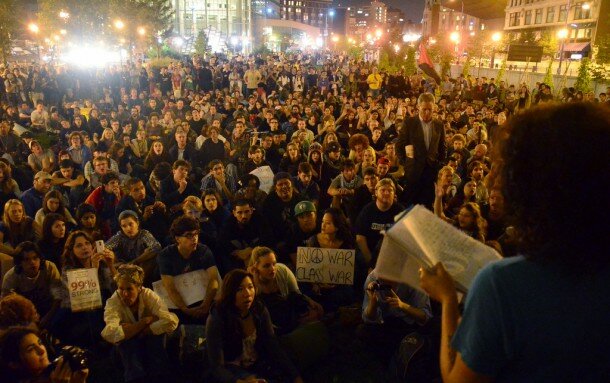 “Occupy has had to do a lot of soul searching…”

That was the response by Occupy New Hampshire organizer Ryan Glen Hirsch, when asked about where the Occupy Wall Street movement is and how it has evolved since its hay-day in 2011. I met with Ryan in Manchester on Tuesday, to discuss the upcoming “Occupy New England (ONE) Regional Convergence (no acronym necessary)” event, scheduled to take place at the end of the month.

As I readied my materials to take notes on the conversation, a packet of small black and white leaflets is slid across the table towards me. Along the top the headline read “New England Power Convergence,” with circular badges denoting Occupy New England and their affiliated groups.

Logos for various political and social activist groups populated the lower corner, with the words “Activism Academy, Environmental March, Solarfest Music Festival” printed boldly beside them. I thumb through the stack, before fitting one into the back of my notebook.

Sitting in a smokey social club, discussing politics and revolution with this now veteran social justice activist, the whole affair felt much like what one might imagine the old days of speak-easy underground politics and radicalism might have been like. This, but for the LCD TV airing a Red Sox showdown against the New York Yankees in ultra high definition and the absence of any imminent police bust-up.

Hirsch, 29, works as an IT specialist with a shipping company in Nashua. But for the past three years, he’s taken on another role as a senior organizer with the Occupy New Hampshire (ONH) movement, as well as becoming a Steering Committee Member with the NH Green Party. In 2011, Hirsch made headlines for delivering a “mic check” to President Obama during an event in Manchester, as part of ONH’s “Occupy the Primary” campaign.

But since the end to urban encampments and regular confrontations with police, Hirsch explained  that the Occupy movement has been forced to change its stripes in many ways. Focusing largely on more local and regional issues, much of the modern Occupy movement exists as an activist network, with factions and issue groups, collaborating and organizing online to plan demonstrations and other actions.

Following Hurricane Sandy, Occupy New Hampshire and other Occupy factions, lead by activists from New York and New Jersey, came together to form “Occupy Sandy,” a relief effort to make up for and highlight what the state and federal governments lacked in terms of response to the disaster.

In an effort to build upon and to feed the relief effort, which is still ongoing, as well as in the hopes of revitalizing the populist grassroots movement, Hirsh and others throughout New England have come together to organize the “Convergence.” A three day intensive activist summit which is scheduled to begin on April 26th and run through the 28th. The convergence will play host to a myriad of regional and nationally recognized activist groups, including:

The event is scheduled to coincide with the University of New Hampshire’s “SolarFest,” which for the first time will host regional activist groups in promotion of progressive causes.

With the first day designated for a meet-and-greet, including a pot-luck dinner, hopes are high that the networking opportunities afforded to activists will prove fruitful. Amongst the fare, in a curious and somewhat poignant donation, “Me and Ollie’s” bakery has agreed to provide day old bread to accompany other donations which are expected to be announced in the coming weeks.

The second day will primarily focus on teach-ins, during which experienced activists will host classes on modern activism, ranging from unionism to electoral issue advocacy. On the third, in addition the Solarfest activities, a ceremonial dance exhibition is planned by Idle No More, which will either follow or prelude a march and litter pickup in downtown Portsmouth.

These actions and coalitions come about as the new face of the Occupy movement begins to emerge. Within the Occupy’s ranks, many who had previously dedicated themselves to organizing full time, have since stepped back and taken on more general coordination and coalition building efforts. When asked why the need for the change in strategy and organizing, Hirsch joked:

“Occupy was defeated by jobs.”