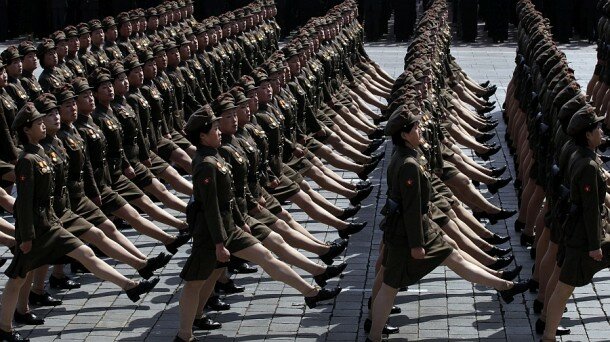 Kim Jong Un, North Korea’s young leader, is not pleased about the UN sanctions imposed on his country after North Korea carried out another nuclear test in February. The country conducted two other tests before, one in 2006 and another in May 2009.

Jong Un is not so happy about the annual South Korea-US military drills either, which are conducted each year and run until the end of April.

Pyongyang is threatening dire consequences for both South Korea and the United States. North Korea’s official media, Korean Central News Agency (KCNA), reported on Friday that Jong Un ordered military officials to be on standby to “strike any time” against U.S. and South Korean targets.

Kim Jogn Un issued a statement same day, stating “he has judged the time has come to settle accounts with the U.S. imperialists in view of the prevailing situation.”

By Saturday, the top officials of North Korea declared that the country is “entering the state of war” with South Korea.

U.S. officials have said they’re taking the threats coming out of Pyongyang in recent weeks very seriously, but North Korea had a history of confrontational rhetoric.

UN Security member Russia urged all sides to show restraint. China, North Korea’s sole formal ally, is staying quiet about the situation for now. Experts say China’s patience with its ally might be wearing thin as China itself going through a transition in Government and understandably prefers to focus on its current issues than Kim Jong Un’s tantrums.

China is North Korea’s biggest trading partner, and main source for food, arms, and fuel. Collapse of North Korea could cause China many problems such as thousands of Korean refugees, loose nuclear materials and the risk of a war that China prefers to avoid.

North and South Korea have technically been at war since the Korean War in the 1950s. Two countries never signed a formal peace treaty after the Korean War ended in a truce, leaving the peninsula still at war in principle. Since then, North Korea has seen U.S. relations with South as a threat to its existence.

A full-scale North Korean attack is unlikely but analysts say there is fear that a localized combat might escalate as South Korea has vowed to respond harshly if North Korea provokes its military.