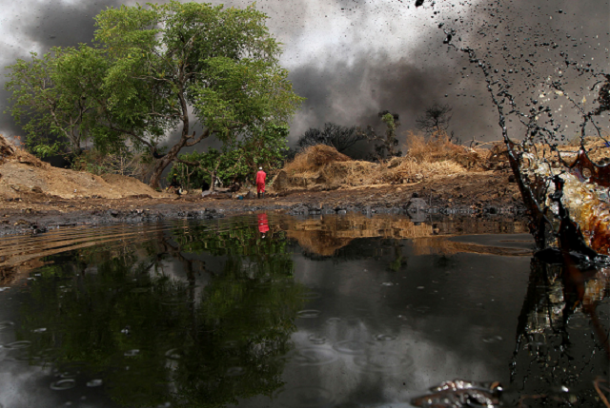 “The scale of the pollution is enormous: twice as much oil has been spilled in Nigeria than was in the Gulf of Mexico. Only there (Nigeria) it’s never been cleaned up.” – Friends of the Earth Netherlands spokesman, Geert Ritsema

The headlines on January 30 were somewhat ominous:

But why? In a world where headlines sell, isn’t the sexier story “Nigerian farmer scores victory against oil giant in landmark environmental suit”?

Because that’s what happened.

In 2008, four Nigerian farmers – Alali Efanga, Chief Fidelis A. Oguru, Eric Dooh and Friday Akpan – in the 8th largest oil-producing area of the world, known quite literally for its kleptocracy where “government exists to increase the personal wealth and political power of its officials and the ruling class at the expense of the wider population” – the farmers, joined by environmental group Friends of the Earth, brought suit against Royal Dutch Shell (RDS) at The Hague Civil Court in The Netherlands for destruction of their land and livelihood in the Niger Delta Region that occurred between 2004 and 2007. In 2009, despite massive protestation from RDS that its Nigerian subsidiary was solely and legally at fault for the farmers’ damage, mostly at the hands of leaking oil pipelines, the Dutch judiciary declared itself proper jurisdiction to try the case (which, of course, RDS objected to).

At the request of the Federal Republic of Nigera, the United Nations was allowed access to study targeted regions in the oil-rich nation for pollution and damages and the health impact on its citizens. In 2011, the United Nations Environmental Program (UNEP) released its 14 month study in a report entitled UNEP Ogoniland Oil Assessment Reveals Extent of Environmental Contamination and Threats to Human Health. P.S. read it.

What the UNEP assessment found, broadly, was that there were two items which needed immediate attention by the Nigerian Government. From the press release: (1) “Drinking Water Pollution in Some Places So Serious Immediate Emergency Action Needed”; and (2) “Full Environmental Restoration May Take Up to 30 Years with Calls for an Initial US$1 Billion Fund to Kick-Start Clean-Up”.

The report went on to say that it:

“….could prove to be the world’s most wide-ranging and long term oil clean-up exercise ever undertaken if contaminated drinking water, land, creeks and important ecosystems such as mangroves are to be brought back to full, productive health.” And “….shows that pollution from over 50 years of oil operations in the region has penetrated further and deeper than many may have supposed.”

In terms of the health impact on the region, the UNEP report states clearly – as by way of only one example – that drinking water wells used by families are contaminated with benzene (ie: known carcinogen), at astounding levels – in fact, over 900 times more than what the World Health Organization guideline are. This particular site mentioned is near a Nigerian National Petroleum Company pipeline.

In laying out the devastation to the fishing industry, the report reads: “the fisheries sector is suffering due to the destruction of fish habitat and highly persistent contamination of many creeks. Where entrepreneurs have established fish farms for example, their businesses have been ruined by an ever-present layer of floating oil.”

And that’s where our farmers re-enter the story.

Here’s the official position taken by Shell attorneys in this suit:

Whatever happened between 2004-2007 was as a result of consequences of illegal theft and sabotage (aimed at stealing the crude), not anything Shell did.

They “believe” there was “a” spill;  that it “wasn’t our fault”; that they “cleaned up nevertheless” and that’s that.

On Wednesday, January 30, 2013, a verdict was rendered, bringing to a close a very long haul for the farmers, their families and communities.

First, the Court acquitted RDS of most of the pollution charges filed against it by all four farmers.

In its ruling, however, it was noted that Shell Petroleum Nigeria (SPDC), a subsidiary of RDS, was responsible for the oil spills, and that the spills were caused by sabotage, not poor maintenance of RDS facilities.

More generally, the Court ruled that Royal Dutch Shell cannot be held liable for the pollution in the Niger Delta region of Nigeria.

And since Shell Nigeria was found partly liable, it has been asked to pay compensation to only one of the farmers, Friday Akpan, for breach of duty of care by making it too easy for saboteurs to break open an oil pipe on his particular land.

From the ruling: “Shell Nigeria should and could have prevented this sabotage in an easy way. This is why the District Court has sentenced Shell Nigeria to pay damages to the Nigerian plaintiff” (Akpan), the Court said.

The level of damages are to be determined at a later hearing and the farmers who weren’t so lucky as Friday Akpan will have three months to appeal in their matters.

During the course of the trial, Mr. Akpan, 72 years old, disclosed that 47 of his fish ponds were damaged and rendered useless as a result of the oil pollution and spillage. If you can spare less than two minutes of your time, I highly encourage you to watch this video of Mr. Akpan, post-ruling.

According to Shell’s own data provided during testimony, approximately 26,000 barrels of oil spilled into the Niger Delta Region last year. Also according to Shell, they raked in 30 billion in profits last year.

But added: “We did not lose the case, it was not operational failure. The leak was the consequence of sabotage”.

Nothing like getting the last word in, Goliath. Nothing like multinational corporations operating with impunity in developing nations….

On the other hand, let’s remember this for what it truly was: a 72 year old Nigerian farmer and father of 12 doing battle with one of the world’s most ruthless oil behemoths. And coming out on top. Though Mr. Akpan’s colleagues did not fare the same, they will be appealing. RDS’ Castelein warned, however, that any appeal might just slow the process of settling up the damages with Mr. Akpan.
And round and round we go.
[photo credit: worldpolicy.org]