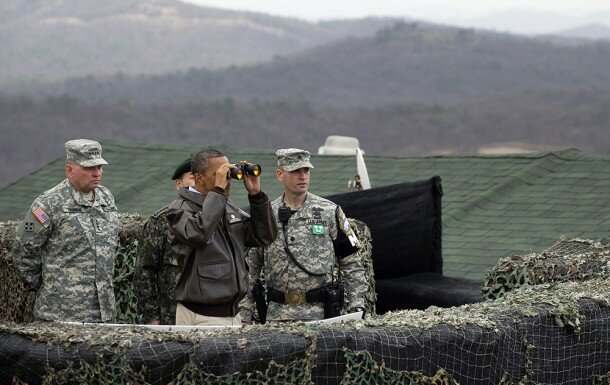 Guam will soon be host to a U.S. missile defense system, as sabre rattling and war time rhetoric continue to spill from Pyongyang. The Terminal High Altitude Area Defense system, or THAAD, will be deployed to the U.S. protectorate of Guam in the coming weeks, in an effort by the U.S. to buffer itself against any potential North Korean missile threats.

Statements, made in a press release by the Pentagon today regarding the move, reflected Washington’s growing concern with the increasingly heated threats and actions made by North Korea in recent weeks.

“The United States continues to urge the North Korean leadership to cease provocative threats and choose the path of peace by complying with its international obligations, remains vigilant in the face of North Korean provocations, and stands ready to defend U.S. territory, allies and national interests.”

Wednesday, North Korean officials barred the entry of South Korean workers into a factory co-owned by the two Koreas in Kaesong. This came shortly after Pyongyang issued threats of nuclear attacks and missile strikes against the South and the United States, as well as a declaration of an end to the 1953 armistice, which effectively ended the Korean war.

In a statement to the BBC, the Pentagon said the deployment was a “precautionary move,” citing that the U.S. stood ready to defend itself and its allies, should North Korean threats prove legitimate.

The “THAAD” system as a mobile land based defense system, incorporating highly sophisticated and highly integrated threat identification and reaction systems. Able to connect and integrate into the Naval Aegis system and other military weapons guidance networks, THAAD is amongst the Pentagon’s most sophisticated missile defense systems. Its deployment to Guam is not likely to go unnoticed by Pyongyang.

Since Kim Jong Un’s ascendency to his father’s demigod political leadership role, many throughout the globe and region have speculated about the young dictator’s intentions for his country and relations with the rest of the world. As something of a “wildcard” to outside observers, his take over from his father in 2011 came about with considerable uncertainty as numerous rumors and reports of power-sharing arrangements between he, family members and the military floated about.

While South Korean officials maintain a firm stance and even express concern over the recent escalations of the rhetoric, they have tempered their concern, citing that North Korean posturing of this nature is nothing new. Throughout the early 2000s, North Korea, then under Un’s father Kim Jong Il, had repeatedly threatened to strike the South, the U.S. and various other nations, yet never followed through.

In a statement to reporters during a daily briefing on Monday, the White House Spokesman Jay Carney said,

“I would note that—despite the harsh rhetoric we’re hearing from Pyongyang—we are not seeing changes to the North Korean military posture, such as large-scale mobilizations and positioning of forces. We haven’t seen action to back up the rhetoric.”

However Secretary of Defense Chuck Hagel took a stronger line today, calling North Korea a “real and clear danger and threat” to the United States, while commenting on the missile shield deployment.

The move of the THAAD to Guam is reported to have already been planned, however citing recent developments regarding North Korea, DoD’s decision to move up the timetable for deployment has left many wondering if they should expect more of the same when it comes to tensions, or if another Korean war isn’t around the corner.