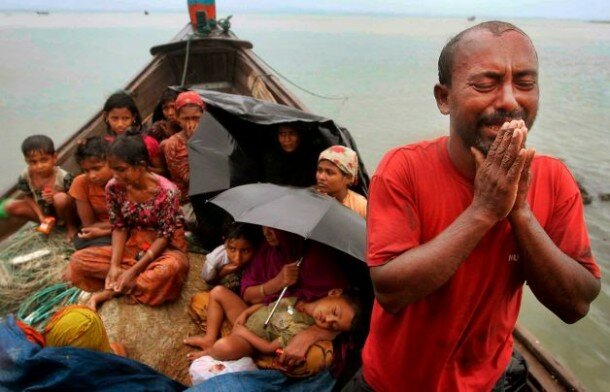 Human rights advocates throughout the globe are working overtime today to draw attention to the increasingly dire state of affairs in Myanmar. In recent decades, the centuries old ethnic tensions between the majority Buddhist population and the minority Muslim population (known as the “Rohingya,”) have led to increasingly bloody clashes between the two communities.

This month alone over thirty people have died in waves of violence carried out against the Rohingya villages and neighborhoods by Buddhist mobs.

Some reports claim that many of the mobs were led by area monks, who have allegedly been publishing anti-Muslim propaganda and inciting acts of arson and other violent attacks against the Rohingya. One monk in particular, hailing from the Meikhtila area, has been especially concerning to observers, as tensions escalate.

The self described “Bin Laden of Buddhism,” monk Wirathu, has remained a central figure in the conflict for over a decade, having been admittedly responsible for wide scale anti-Muslim propagandizing which in February resulted in a mob of 300 Buddhists descending on and destroying a school reported to be in the process of converting to a mosque. 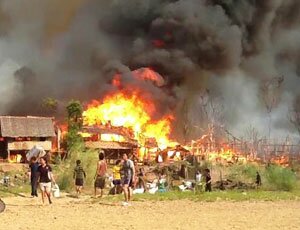 In a press release by the Arakan Rohingya National Organisation on Saturday, the call was let out to end what they call “the systematic killing of Muslims in Burma.” It continued, claiming that since Wednesday, at least 14 mosques and hundreds of Muslim homes had been destroyed and that upwards of 20,000 ethnic Rohingya had been displaced.

On Saturday, 106 Rohingya people were found, starving and dehydrated, in a small boat floating adrift off the coast of Phuket.

Though unclear if these 106 are specifically part of the estimated 20,000 displaced from the past week’s violence, a total of 402 Rohingya refugees have been found at sea by Thai authorities alone, since the beginning of this year. Similar and at times greater numbers of refugees and expatriated Rohingya have also been reported throughout the region, with Malaysian authorities struggling to deal with increasing numbers of these desperate and displaced people.

Official state responses to the violence have been muted at best. Over the last two weeks, several hundred police and security forces have been dispatched to the troubled areas such as the state of Arakan, where violence and ethnic clashes have been a regular occurrence for decades. However despite their presence, as recently as last night, fifteen more Muslim homes were burned and destroyed, and as many as seven people were killed.

Concerns over state complicity and potentially even participation in the anti-Muslim violence are very real throughout the both human rights circles as well as area Rohingyas. According to a 2004 report by United Nations High Commissioner for Refugees (UNHCR,) regular violence and forced displacement of Rohingyas by Burmese/Myanmar military and security forces were common during 1990s and early 2000s, with hundreds of thousands being forced from their homes, murdered or otherwise disappeared.

Though historically the conflict has been considered an ethnic/religious one between the Buddhists and the Muslim minority, new concerns regarding economic interests have watchdogs ratcheting up their calls for international attention and possible intervention. The newly developed Shwe pipeline, which is set to open later this year, has caused worries that further forced displacement and violence is impending.

With major Western economic and banking interests such as the Royal Bank of Scotland (RBS, owner of the U.S. “Citizens Bank” corporation,) as well as British finance giant Barclays backing the development of the pipeline, numerous calls for divestment throughout the human right advocacy community have been made, dovetailing concerns over further violence.

UK based human rights advocate and founder of “Save the Rohingya,” Jamila Hanan said of the coming developments, in a statement to energy industry watchdog “Priceofoil.org”:

“We are anticipating a third massacre of the Rohingya on the same scale which took place in Rwanda. We have been informed that this will take place sometime between now and mid-April.”

As outrage over both the atrocities taking place in Myanmar, as well as Western media’s relative silence on the matter continues to rise, the “hacktivist” group Anonymous has launched its own initiative to draw attention to the crisis.

Dubbed “OpRohingya,” Anonymous in collaboration with online and grassroots partners, has planned matching “Twitterstorm” and “Paperstorm” actions, aimed at pressuring officials and media outlets throughout the globe and Myanmar specifically, to speak up and condemn the violence which continues to plague the Rohingya.

During a tour of the affected areas in Myanmar on Friday, UN special adviser Vijay Nambiar expressed “deep sorrow” over the violence and destruction and called on religious and community leaders to “abjure violence, respect the law and promote peace”. However, between the long standing, deep rooted nature of the conflict, as well as the Myanmar government expressing little more than lip-service concern over the violence, of which they’ve directly taken part in previously, there is little expectation that any effective Burmese domestic solutions are on the horizon.