Mommy, Where Do Smartphones Come From?

The most byooootiful place in the world, sweetie.  A place called Bangka.  In the country of In-do-ne-s-ia.

Bangka Island, Indonesia, a predominately Muslim population of 960,000, located due east of Sumatra.  An amalgam of what used to be swamps, palm trees, magnificent beaches, mangroves, white pepper fields, plains and hills.  It is today best described as “a barren wasteland“, borne of one of the world’s greatest resources for the tin ore ultimately used in the composition of the Smartphone you are probably using to read this. Tin mining. Mining this island’s soil, which has left it bereft and cratered.

It is always fascinating to think of where things originate.  In this instance, the “thing” – your Smartphone or your Tablet – is so global, so “everywhere”, so prevalent in our very connection to the world in which we live.  How could we not know?  How could we not wonder how this marvel of technology came to be?  Is it not our moral and ethical responsibility to avoid being labeled simply as “end users”?

We’ve all heard the child labor and sweatshop stories about Apple’s cottage industry in China.  But there is little said of the thriving – and oftentimes deadly – tin mining industry in Bangka, where the use of child and slave labor has metastasized into the global electronic goods supply chain at the expense of the Indonesian people, who have been working in these mines from the time of Dutch colonization in the 19th century. 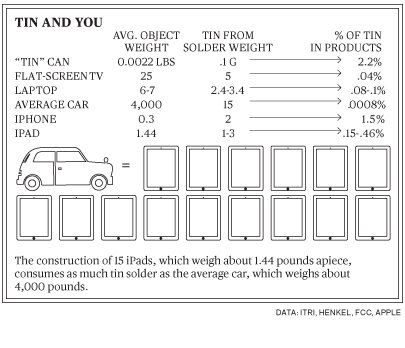 *Tin’s actual use in Smartphones is solder.

*A typical tin mine worker in Indonesia makes the equivalent of $7.95 per day, if lucky.  This is roughly $55 a week.  $222.60 each month. $2,600 annually.  Despite the health and environmental hazards these workers endure, it is a downright coveted job, considered “good money”.

*Prices for tin ore, as you might imagine, are astronomical.

*Mine workers begin and end their days with a bucket and pickaxe; nearly all of the work is done by hand.

*They contend with mercury poisoning, neurological problems and live under the constant threat of landslides.

*There are estimates of up to 50,000 miners working today.

*Samsung, Apple, Sony, Panasonic are just a few of the big-ticket manufacturers getting their materials from Bangka.

Yes, the demand for our technology must be met.  But at what cost, information and instant gratification?  The greatest irony in this sad tale is that the chief derivative mineral of tin ore – cassiterite – ultimately allows our Smartphones to become classified as “eco friendly”.

For the definitive report on mining in Bangka, please see Kate Hodal’s piece in The Guardian, published in November, 2012.