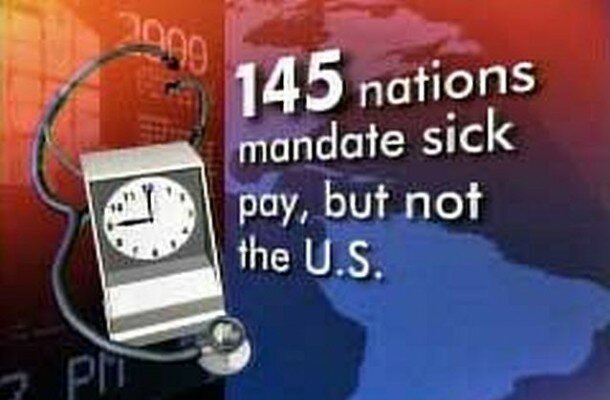 The United States of America is the only industrialized nation in the world that does not guarantee any paid sick leave to its workers. Worldwide, over 145 countries guarantee all workers paid time off for illnesses. In the absence of any federal policy on mandated sick leave in the near future, American cities like Portland, Seattle, Washington D.C., and San Francisco have taken action requiring all workers have access to paid time off for sicknesses.

Earlier this month, the city council of Portland, Oregon passed a law mandating paid sick time for all workers in the city. The law, which passed unanimously through the council, requires that all businesses with six or more employers must offer 1 hour of paid sick leave for every 30 hours that an employee works, up to 40 hours in a year. Employers of less than 6 people must still provide time off for their workers, although unpaid.

The bill is slated to go into effect on Jan. 1, 2014 at which point workers in Portland will become part of a very exclusive club of Americans who are guaranteed paid time off from their jobs, should they suffer from a sickness. Portland joins Seattle, San Francisco, and Washington D.C. on the short list of U.S. cities which require employers to offer paid sick leave to their workforce.

With Portland’s passing of sick leave legislation, the momentum is now growing elsewhere in the U.S. for the passage of similar sick leave laws. Most notably is the fight over sick leave legislation in New York City. A majority of the members of the New York City Council are ardent supporters of a bill to enact mandatory paid sick-leave for all workers in the city, but Council speaker (and Mayoral hopeful) Christine Quinn, has for years refused to bring the bill in front of the council for a vote.

Quinn has voiced support for sick leave legislation in the past, but she now says that this is not the right time for such legislation, given the state of the economy. The New York Daily News recently reported that Quinn’s campaign for mayor has received over $370,000 in campaign contributions from business leaders who are lobbying to block the legislation.

According to one report, 43% of New Yorkers, or 1.6 million workers , lack even a single paid day off from work due to sickness. However, pro-business groups have long lobbied against paid-sick leave legislation by arguing that the costs of providing paid time off to low income workers would be too burdensome for business, and could force some small employers to lay off employees or even go out of business entirely.

Numerous studies done on the subject fail to back up these claims. San Francisco enacted mandated paid sick leave for workers in 2007, and according to a report from the Community Service Society of New York, the legislation has not had the negative impact on business that business leaders have warned. Donna Levitt, head of San Francisco’s Office of Labor Standards Enforcement, testified in 2009 before the New York City Council that since their law was enacted “A study was done of the first year of our ordinance and found that no businesses had either closed or laid off workers specifically citing the cause as the San Francisco paid sick leave ordinance.”

In Philadelphia, City Council passed paid-sick leave legislation in 2011, but the bill was vetoed by Mayor Michael Nutter. The Council has again passed the sick leave bill, sending it to Mayor Nutter’s desk for a second time.

Nothing leads anyone to believe that this time Nutter will change his mind on the bill, which he has until April 4th to sign or veto it once again.

According to The Philadelphia City Paper, Comcast Corporation, which is headquartered in Philadelphia, spent over $100,000  in 2012 alone lobbying to defeat the paid sick leave bill.

Nationwide, 38 percent of all private-sector workers have no paid sick days at all. Because of this, many workers come to work sick on a regular basis, which worsens outbreaks of flu and other viruses.

According to the Center for American Progress , a shocking 90% of all food service workers lack any sort of paid sick leave at work. 67% of men and 70% of women have reported “cooking, preparing, or serving food while sick”. This has obvious implications for people and for business. Sick workers make other workers sick, as well as customers.

The case for the enactment of paid sick leave is strong. Numerous studies have shown that passage of such laws would be a significant victory not just for workers, but also for the economy as a whole. A study from the Center for American Progress recently found that a nationwide bill similar to the one passed in Portland earlier this month would reduce emergency room visits by 1.3 million a year, saving over a billion dollars in medical costs annually. The study also reported that employees who come to work unhealthy cost employers $160 billion per year as a result of lowered productivity levels.

Late Tuesday, news broke that Christine Quinn has finally begun seriously negotiating the on the sick leave bill for the first time. The New York Times quoted a Quinn associate as saying there is now a “real effort for a workable compromise this week.” Early Indications are that any bill agreed upon by Quinn would most certainly be a watered down version. The New York Times article  reported that Quinn is pushing for a bill that would only cover employees of companies with 20-30 or more employees, rather than the current proposed bill which would cover all employers with 5 or more employees.

Quinn’s opponent in the Democratic primary, Public Advocate Bill de Blasio said that a watered down version of the bill with a cutoff of 20 employees would leave over 384,000 New York workers uncovered. The news that Council Speaker Quinn of New York has begun to negotiate on the sick leave bill is a clear indication that Quinn is feeling the effects of public pressure and caving after a refusal to even consider the bill for over three years.

As more information becomes available on this subject, the case is becoming increasingly clear in favor of paid sick leave legislation. In polling, 90% of American adults said they would support a bill that required all workers be guaranteed seven sick days per year. The more attention that is drawn to this subject, the more the pressure will grow on politicians like Mayor Michael Nutter of Philadelphia, and Council Speaker / Mayoral Candidate Christine Quinn of New York to stop standing in the way of paid sick leave laws.