Minding Our P’s and T’s This Memorial Day 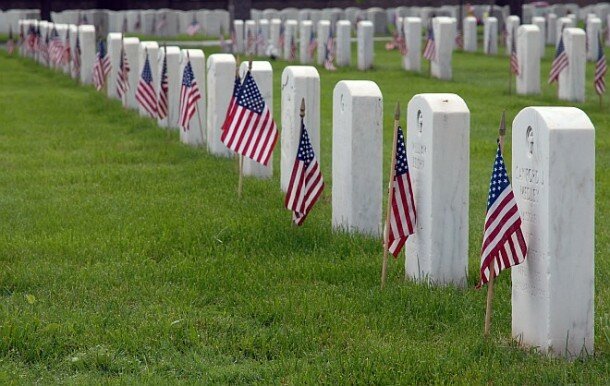 In between family, friends, burgers, beers and innings this weekend, we would all do well to take a moment, long or short, verbal or silent, to deeply thank those we honor on Memorial Day. Enhanced thoughts and prayers for our brothers and sisters still serving abroad in our lingering conflicts wouldn’t hurt either.

Memorial Day first came into congealed being as Decoration Day in May of 1868 on the order of Civil War Gen. John Logan to sanction a time for observance already informally practiced at various times in the North and South alike. By the end of WWI, the South finally accepted and participated in the national holiday as casualties of the Great War were included with those of the Civil War to remove the sting of Confederate defeat. While Veteran’s Day is intended to thank all who have served, living and dead, May’s remembrance is most specifically intended for those lost to hostilities.

Of course the long weekend also affords those inclined opportunity to ponder our good fortune, citizenship, nationhood and the imperative of peace. As one who did not serve, I can’t help but feel some guilt on these holidays; my older brother and I ended a military tradition in our parent’s lineage that goes back hundreds of years. We had five ancestors fight in the Revolution, one a Hessian working for the Crown. Three ancestors served in the Civil War including Daniel Urich, a drummer at the head of Sherman’s march to the sea. My Grandpa Urich shipped with the dough boys in WWI, and was three days from the front when the Armistice was declared. Both my late father and late uncle served as naval officers in the Pacific during WWII. Dad was actually called back for the Korean War, but pulled lucky duty in the Mediterranean and returned with plenty of colorful stories bereft of bloodshed.

During the Vietnam War, my brother turned 18, registered, was medically cleared and then pulled a high number. Notwithstanding that my grade school friends and I had been playing “war” against Cambodians and Viet Cong, showering each other with deadly dirt clods, I was glad; I loved my brother and youthful mislaid martial yearnings aside, I didn’t want to see him hurt or worse. And so the chain was broken; my own draft registration at the post office during the Iran Hostage Crisis was a mundane formality.

As I work through this contrition every year, I stumble upon the same reconciliation; could it be that my family and I have enjoyed general peace and prosperity for the bulk of our lives as the intended consequence of all my veteran relatives’ acts? Can we annually count  our blessings and express gratitude to those who gave all? Isn’t one of the very purposes of government to protect its citizenry so they may do their collective best to lead healthy, happy, productive lives in relative calm and peace?

Most men and women who have actually seen the horrors of war rarely speak of it, even to spouses, children and other loved ones; my stoic Uncle Bob stood up under attack off Saipan as Kamikazes flew toward his ship, yet he carried a sense of regret at having ordered his men to fire in their own defense, and that is as much detail as anyone in the family ever heard from him. No, it is plain the original intent of a Memorial Day was not to celebrate a jingoistic glorification of war, but to honor and thank those who served and gave all so that more could live free. If one doubts this, page through Remarque’s “All Quiet on the Western Front,” recite “In Flanders Fields” to yourself or try and pry a war story out of a genuine combat veteran.

Given the above, my humble suggestion for all of us this weekend is to mind our P’s and T’s; Peace and Thank You.