Millennials Speak is a global collection of essays on issues pertinent to that generation. R. P. Thead, the author and editor who oversaw the book’s production, shares his thoughts on the evolution and importance of the project.

1. Please elaborate on the focus of your upcoming book Millennials Speak: Essays on the 21st Century.

There is a lot of research coming out about the Millennial Generation. There seems to be new organizations, reports, and books concerning this demographic every single week. But, most are very American-centric. Considering that about half of the world’s 7 billion people are Millennials, I think this is a very narrow focus. Looking at only U.S. Millennials leaves more than 3 billion people out of the conversation.

Some of the characteristics that set the Millennial Generation apart include how we came of age with the internet, use social media, and are a very globally aware and connected age-group. Yet, this third aspect—the global part—seems to omit the Millennials outside of the U.S. in existing research. It is increasingly rare that events that take place on the other side of the world do not affect the U.S. I think it is important to hear what Millennials from those places, and others, have to say about the events.

This book is about issues, not a demographic study. Less than half of the writers are U.S. nationals.

2. Where did the initial idea come from that prompted you to undertake this project?

Initially I was looking for content writers concerning a set range of topics for my website, which was the core of the topic list found in the book. I spent one day advertising at the colleges and universities in the Washington region. As I was posting fliers in various academic buildings, the idea of turning the flyer into a book came to me. I later contacted the book’s producer and author of two submissions to discuss the idea. His name is Sabith Khan, Virginia Tech PhD student and a friend and classmate I met at Syracuse University’s Maxwell School. That was about five months ago. 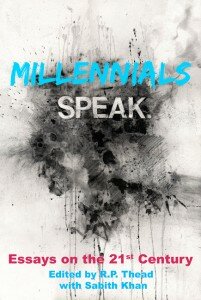 3. Describe the role you played in bringing this book to publication.

I have had a lot of help from Sabith, and other friends, in recruiting writers. But, for the most part I went out and recruited the writers myself using Twitter and other social media sites. Of the 22 writers, I have only met about half in person. I went looking for other Millennials who are active in writing about the specific topics I wanted covered in the book, although I tried to let the book develop as organically as possible.

I am also the editor of the book, assisting each author in framing their work so that it fits best with the other essays. It’s been a serious balance of “what you want/what you get” and an exercise in diplomacy—some people do not like having their work changed. But, it is part of the publication process and everyone’s work (including my own) went through the grinder to get it right. It is a great group of people to work with and I have learned a lot during the process.

I also financed all of the production costs that we are hoping to have covered with the Kickstarter campaign. That is, I invested a large sum of money hoping I will recoup these expenses via Kickstarter, plus some. And, I am formatting the paperback interior and the eBook.

Rachel Kerwin, the book cover artist and layout designer (and author of one essay), is great to work with. We previously collaborated on another project, my novel The Sovereign Soil, which was published in the fall of 2012.

4. Who is the primary audience for Millennials Speak?

Simple answer: Millennials, although I had a more general audience in mind as I worked with each writer. I tried to coax a blend of hard-hitting factual research and blog-style, friendly copy out of each writer. I encouraged each author to use “I” at some point, as I think the personal take on the issues (and the writers’ personal backgrounds) is an interesting aspect to the essays. I tried to create a tone that I think that we—as a generation—can easily connect to when we read and consume content.

But, of course I would like to reach a wide audience with the book and was pretty diligent about the writers not using academic jargon and trying to stay away from acronyms. I also encouraged the writers to explain concepts that students of public policy issues often assume their readers understand. The book is not dumbed-down, but it makes some complex issues and topics very approachable.

5. How are you planning on marketing this book?

I am using Kickstarter as the pre-release publication platform. It’s easier to piggyback off of their brand and the writers’ existing online presence. I don’t really see the utility in creating a host of book-specific social media accounts and a website, having to start from scratch building a network around the book. I think the marketing power from this book will come from the 20+ writers pushing it out through their own networks and social media accounts, plus talking to as many sites and media outlets that will listen.

Permission to use images granted by R. P. Thead