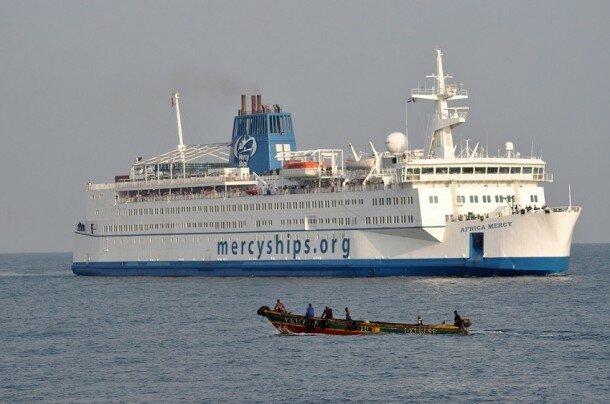 Every once in a while, setting aside faith, politics or any ulterior motives, it’s nice to call attention to something just plain good. Today, we profile Mercy Ships.

Recently, while sort of half-watching 60 Minutes, a featurette on the Mercy Ships charity caught my eye. I found the entire concept to be revolutionary, fascinating, and just plain brilliant. The mission, simply to “provide free healthcare and increase healthcare delivery systems in the poorest of nations”. 500 feet long, 16,500 tons and over 400 crew members on a floating hospital, the current Mercy Ship, Africa Mercy (located in the port of Conakry, Guinea through May 2013) travels from port to port in under-served and underprivileged nations, offering preventative care and life-saving treatments for the world’s “forgotten poor”. Prior to the ship’s arrival at port, flyers are “distributed to alert the public”. An advance team then begins a massive screening of prospective patients to determine which men, women and children may qualify for a surgery, which can be anything from removing cataracts or tumors, performing dental procedures, facial reconstruction or repairing cleft lip and palate.

Little did I know – Mercy Ships has been around since 1978. The charity was founded by Don Stephens, an extremely devout Texan. Mr. Stephens’ son, John Paul, was born with severe disability; his son’s plight inspired Stephens’ vision of a floating hospital. He also realized that 95 of the 100 largest cities in the world were port cities – cementing the idea of using a “hospital ship” as means of traveling port to port, delivering efficient medical care to vast numbers of people.

From the organization’s site:

A dream that began 30 years ago in a young man’s heart has become reality—a big, white, state-of-the-art hospital ship that delivers hope and healing to people around the globe living in dire circumstances….serving all people without regard for race, gender, or religion.

An estimated ONE BILLION people lack access to even basic health care. They are plagued by preventable disease, untreated illnesses and neglected injuries. Even a simple toothache can become a life-threatening crisis.

Access to good medical care is the key to providing desperately needed hope and healing. But how can that be accomplished in countries without basic supporting infrastructure—including a clean water supply, a reliable source of electricity and trained medical professionals. The answer began in a dream of a hospital ship, a self-contained instrument of mercy that would take highly qualified volunteers to the people who need them most.

We are transforming lives one surgery, one medical treatment at a time. Since 1978 Mercy Ships has performed services valued at more than $1 billion, impacting more than 2.35 million people directly during more than 575 port visits in 54 developing nations and 18 developed nations . . . and still counting! 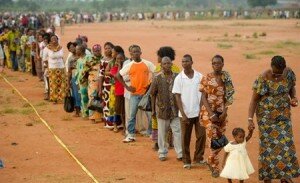 Screening Day at a Mercy Ship port in Togo

Every important dignitary and ex-President, from Nelson Mandela to Jimmy Carter, has lauded the efforts of the Mercy Ships organization, which also aids in natural disasters, as they did with the earthquake in Haiti in 2010. But what is possibly the most impressive thing, however, is that every doctor, nurse, assistant or technician aboard that ship is a volunteer. And we’re not talking about the average “volunteer”. These are highly skilled, well-educated professionals. At every level, the Mercy Ships volunteers have been known to give up prominent careers back home in order to continue what they deem to be “fulfilling” work with this charity. As an aside, the ship is gingerly referred to as “The Love Boat”, ie: many a family has begun within the volunteer circle. In fact, where both parents are volunteers, families are provided housing and schooling. Many children have grown up in the organization and have never known simple dealings with the outside world, for example, what it is to mail a letter, or what an ATM card is. They can, however, speak several languages and are extremely well-traveled.

So how does it work? How do these volunteers afford to volunteer, to leave their lives behind, and how does this giant endeavor get funded? On a broad level, the organization of course has many individual and corporate sponsors. Individuals donate just as they would, for example, to The Red Cross. Corporate sponsors range from Coca-Cola to Starbucks to The Lion’s Club, Bridgestone, Johnson & Johnson and many, many mid-level surgical and medical companies that donate pharmaceuticals, equipment and supplies.

As to the volunteers (which number over 1,200 worldwide), it begins in each of their local communities and churches. Volunteers are “sponsored” by an individual, family, school, church, small group or children’s group, and may choose to adopt a patient, assemble patient admission kits, adopt a community development project, a missionary crew member or “Ship Kid”, pay for school supplies, sponsor trips for their own pastors, or sponsor a fundraiser. The designation of Anchor Church Partner is given to any church congregation that pledges partnership with Mercy Ships.

Mercy Ships also funds construction and agriculture projects, aids in the building of schools, clinics, orphanages and wells for local water supply. The organization operates primarily out of Garden Valley, Texas, and has 16 global resource offices in countries that include Spain, Britain, Canada, Germany, Switzerland, the Netherlands, South Africa, and Australia.