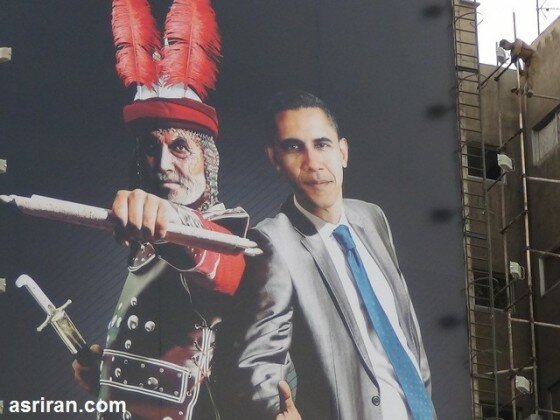 Iranian website Asriran.com posted photos of a new mural that have President Obama and historical figure Shemr shown together, pasted on an apartment building in the city of Tehran.

President Obama is portrayed standing next to Shemr, a 17th Century figure in Shia Islam, with a caption at the bottom that says: “Be with us, be safe.”

Connecting Shmer to President Obama has its roots in Islamic history. Muslims have split into Sunni and Shia denominations after the Battle of Karbala in 680 AD. Prophet Muhammad’s cousin Ali and his followers called themselves the Party of Ali, “The Shia” and were trying to break up from the Muhammad’s Sunni creed.

The Shia, seeking hereditary leadership of Islam clashed with Caliph Yazid who was a follower of Muhammad. Yazid in turn sent Shemr’s army to destroy Ali’s son Hussein who was leading the battle. Shemr, after his offer –a letter of protection- was refused by Hussein, moves on to murder him and wins the battle. 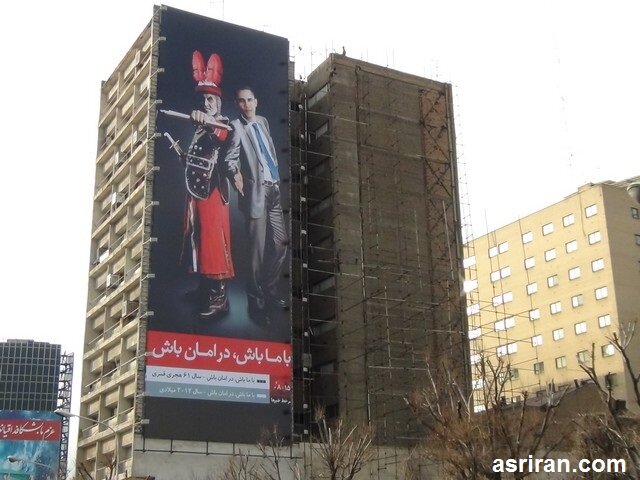 Most Iranians are devout Shiite Muslims, therefore the politics of Karbala passionately resonates with them. In the mural, Shemr presents a similar letter to the Iraninas, as he and Obama both utter the words Ba ma bash – “be with us” – playing on the president’s middle name “Hussein”.

It is difficult to assume the real meaning of the mural as Hussein is highly regarded by Shia as a martyr because he refused to pledge allegiance to Yazid, the Umayyad caliph (second of the four major Islamic caliphates established after the death of Muhammad.)

Nonetheless, it is interesting to see an illustration of the USA President on a massive mural in Iran’s capital city. Interpretation of the meaning of the mural will vary according to political bias of the media outlets, so we chose to leave it up to our readers.