Posted by Emine Dilek on Friday, February 1, 2013 · Leave a Comment 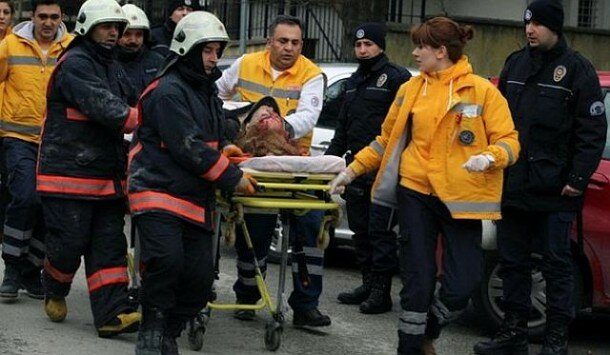 DNA tests are being conducted to confirm the identity of the suicide bomber who detonated explosives outside the U.S. Embassy in Turkey, on Friday, killing himself, an embassy security guard and injuring a visiting journalist.

The injured journalist, 38-year-old Didem Tuncay is ‘not in critical condition,’ a hospital official said.

Authorities believe the bomber was Ecevit Shanli, a member of the outlawed Marxist-Leninist terror group DHKP-C.

Several members of the group are thought to have links to the Syrian regime as one-third of the PKK’s fighters are believed to be Syrians who also have ties to DHKP-C.

The real motivation behind the attack is not known. No terrorist group has claimed responsibility yet, but the intelligence analysts believe it was likely to embarrass the Turkish government and a protest against the deployment of Patriot anti-missile batteries on Turkish soil.

DHKP-C has been active since 1995 and identifies itself as a Marxist-Leninist organization. It broke apart from another militant far-left group Devrimci Sol (Revolutionary Left) and is believed to be responsible from the assassination of a former justice minister, Mehmet Topac, in 1994, as well as the murders of a number of senior police and military officials and in 1996 a prominent businessman, Ozdemir Sabanci.

The group claims to have received training and funding in Europe. It is strongly anti-Turkish State, anti-U.S., and anti-NATO and finances its operations through donations and extortion.

In a statement, the U.S. embassy thanked “the Turkish government, the media, and members of the public for their expressions of solidarity and outrage over the incident”.

White House press secretary Jay Carney said Friday at his daily press briefing that “the attack itself was clearly an act of terror.”

Update: As suspected, the far-left group DHKP-C claimed responsibility for the suicide bomb attack on the U.S. Embassy in Ankara, according to a statement on a website linked to the group, on February 1, 2013.

The photo identified as Ecevit Sanli on the website of the Revolutionary People’s Liberation Party-Front was released by the SITE Intelligence Group on Feb. 2.

This article will be updated as more information comes in.

You can listen to our managing editor Emine’s analysis of the attack, today on Brian The Hammer Jackson Radio Show.