Martin Sheen Honored in Pittsburgh for His Activism 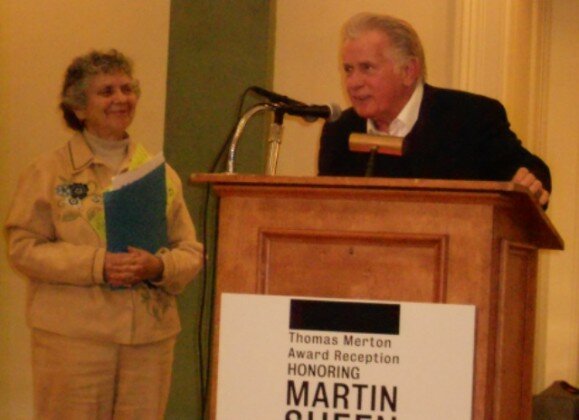 In a building dedicated to those who have fought in America’s wars, about 400 people gathered in Pittsburgh on Saturday to honor a man who has dedicated his life to working for international peace and social justice.

Pittsburgh’s Thomas Merton Center honored actor and activist Martin Sheen with its Thomas Merton Award at the Soldiers and Sailors Memorial Hall and Museum on Saturday, April 13. Thomas Merton was a writer, Trappist monk, and social activist.  The center named for him has been a hub of the city’s peace and justice activity since 1972.

Sheen was born Ramon Estevez in Dayton Ohio in 1940.  His list of acting credits is both long and broad, encompassing more than 50 years and several genres.  According to IMDB.com, he’s appeared in 238 films and television programs and earned dozens of acting awards, including the Emmy, Golden Globe, and Screen Actors Guild along with a handful of lifetime achievement awards.  He received a star on the Hollywood Walk of Fame in 1989.

In his remarks, Sheen repeated a statement that he often makes: “Acting is what I do for a living. Activism is what I do to stay alive.”  His strong Catholic faith has always been the foundation of his activism and he supports the Catholic Worker Movement.  He told the audience that he has been an activist since age thirteen when he organized a labor union and strike of golf caddies at the country club where he worked in Ohio.  “The strike lasted two days and the union lasted four days, but they invited me back anyway”, he said.

His occupation and his avocation often intersect.  Sheen has played

But the role closest to Pittsburgh’s progressive heart is that of Judge Samuel Salus in In the King of Prussia: The Plowshares Eight (1983).  On September 9, 1980, eight antiwar activists – Daniel Berrigan, Philip Berrigan, Dean Hammer, Carl Kabat, Elmer Maas, Anne Montgomery, John Schuchardt and Merton Center founding member Molly Rush – broke into the General Electric nuclear warhead facility in King of Prussia, PA to protest American nuclear policies.  They poured vials of their own blood on office documents and on several of the warheads.  They pounded the warheads with hammers and prayed for peace and nuclear disarmament.

Sheen told the audience that he had heard of the event shortly after returning to the U.S. from filming Gandhi in India.  He met the Berrigan brothers in his travels and they introduced him to Molly Rush.  His conversations with Molly inspired him to become more politically active, “… and my life was changed forever.  Molly Rush is one of my heroes”, he said.

Writer/Director Emile d’Antonio documented the Plowshares trial on a direct-to-video film in 1983. The Plowshares Eight played themselves and Sheen played the judge.

Since then, Sheen has worked tirelessly for many progressive causes:  farm workers, labor unions, nuclear disarmament, animal cruelty, the environment, Darfur, poverty and economic justice issues, racism, gun control, immigration reform, and more.  He said, “I can’t imagine living an honest life and not working for peace and justice issues.”

Sheen has been arrested more than 70 times.  When asked how he’d like to be remembered, he said, “for about five minutes”.  He also said that he’s probably lost some acting jobs because of his politics, but he also got some jobs because of where he stood.

Pittsburgh has a long history of human and civil rights activism, and the Thomas Merton Center has been part of it for 40 years.  According to its website, the Center “works to build a consciousness of values and to raise the moral questions involved in the issues of war, poverty, racism, classism, economic justice, oppression and environmental justice.”  Center is exactly the right word.  TMC staff, board members, and volunteers are present at every meeting, rally, protest, demonstration, hearing, and celebration of progressive issues in the Pittsburgh region.

Other recipients of the Thomas Merton Award include: