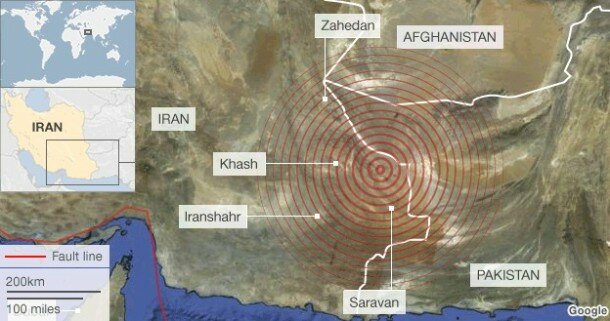 A powerful earthquake has struck Iran’s border regions with Pakistan. It is measured to be the most powerful quake in Iran for more than 50 years.

The number of casualties currently is not clear, but the tremors reported to be felt across Pakistan, India and the Middle East.

According to the Reuters news, 13 Pakistanis were killed in the quake with Pakistan bearing the brunt of the earthquake. The provincial home minister of the Washuk district of Pakistan said the quake destroyed more than 50 shops in the district.

Although the reports from the city of Saravan, closest city to the epicenter, suggest that the damage has been minimal, power and communications were disrupted in Sistan and Baluchistan province.

Sistan and Baluchestan Province is located in the southeast of the country, bordering Pakistan and Afghanistan.

Iran is located on major geological faultlines and has experienced several devastating earthquakes in the last years. In 2003, a 6.6 magnitude quake flattened the city of Bam, killing more than 25,000 people.

This was the second major earthquake hitting the country in one month. On April 9, a magnitude 6.3 earthquake struck Iran, near the Bushehr nuclear power station, killing 37 people and leaving 850 injured.

Iran’s news agencies report minimal damage, and an official at the Russian firm that built the Bushehr Nuclear plant said there was no damage to the power plant.