It’s Time for a Worker’s Movement in USA 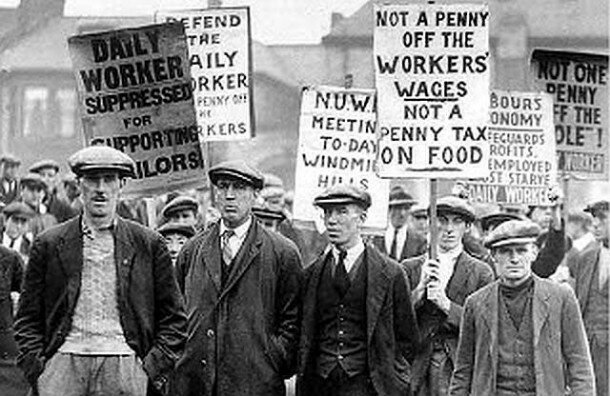 The labor movement has a history that is marked by violence, bloodshed, employer intimidation and oppression. The deck has always been stacked against the unions. It has never been easy for workers to have their voice be heard in the workplace.

The modern American labor movement can be traced directly back to the 1930s and Franklin Delano Roosevelt’s “New Deal” legislation which created a real social safety net for the working class and the poor. Social Security, which the labor movement helped lobby into law, was a major development for the working classes. It meant that the elderly in this nation no longer would be forced into the poor houses.

The National Labor Relations Act (NLRA) was passed in 1935. For the first time, employers would be required to recognize the employee’s right to bargain collectively for a contract in the workplace.

Social Security and the NLRA were two of the most significant programs to affect the middle class in this country. Social Security gave the poor and the elderly a lifeline. The NLRA gave the working class and the unions a voice. Prior to the enactment of the NLRA, governments in the United States had traditionally sided against labor and sided with capital.

Before the Great Depression and the onset of New Deal legislation like the NLRA, courts had used the Sherman Antitrust Act to outlaw union activities such as picketing, boycotting, and striking. Courts also enforced so-called “yellow-dog” contracts which employees were forced to sign saying that they would never go on strike or engage in union activities (Hurd, 1976).

In addition to courts issuing injunctions that squelched union activity, governments would even go as far as to send out militia groups to put down labor unrest. Passage of the NLRA represented a major change from the government’s historical record of antagonism towards the labor movement.

The NLRA gave workers in the United States the rights to organize unions, collectively bargain contracts with their employers, and strike. The Act also spelled out a list of unfair labor practices (ULP) that employers were barred from committing. The Taft-Hartley amendments to the Act tacked on a list of unfair labor practices that unions were barred from using.

Among these ULPs are actions such as discriminating against employees for union activity, interfering with union activity, and refusing to bargain in good faith. For the first time, employers would be forced to recognize employee unions and negotiate contracts with them. Prior to the enactment of the NLRA, there was no formal legal process for unions to bring employers to the bargaining table. They could simply ignore them. There was no law that compelled employers to negotiate anything with their employees. The NLRA changed all of that. The act is the principal law that governs the employee / employer relationship in the United States to this day.

In the years immediately following passage of the NLRA, union activity exploded. Labor militancy would have existed whether the Act was passed or not. In fact, many historians speculate that the NLRA was only passed to abate the militancy of labor (Hurd, 1976). Many of labor’s early successes in the 1930s and 40s were due to approaches that were not exactly sanctioned by the NLRA, or even legal at all. 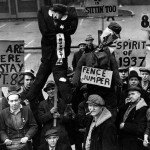 Labor successfully organized Ford, General Motors, Chrysler, and Bethlehem Steel in these early years following the enactment of the NLRA. However, some historians argue that many of these successes were in spite of the NLRA, rather than because of it. The infamous Flint sit-down strike of 1937 is one example of this. The sit-down strike was essentially an illegal takeover of company property that was not protected under the NLRA. In 1937 alone, 400,000 workers participated in approximately 500 sit-down strikes throughout the nation (Hurd, 1976). Mass demonstrations, sit-ins, strikes, boycotts, and a sense of militancy in organizing drove most labor successes in this early time period:

“Unions grew rapidly in the later 1930’s because workers began to challenge capital directly and effectively. Sit-down strikes and a vigorous organizing drive by the CIO were responsible for much of the growth. Total union membership rose from 3.6 million in 1935 to 10.2 million by 1941. The experience of the period indicates that, with a few exceptions, capital obeyed the NLRA only when forced to by strong unions.” (Hurd, 1976)

The National Labor Relations Act gave a sense of legitimacy to unions that they never had before. This certainly contributed to the rapid expansion of unionism in the period immediately following its enactment. However, labor militancy was already boiling over across the nation before the NLRA was ever put into place. Employers did not make concessions to unions because of the NLRA; they made concessions because of the militant labor militancy that was sweeping the nation.

However, when labor unions began to use the NLRA framework as a guide to organizing and bargaining, labor lost its sense of urgency and militancy. Under the NLRA, unionism tended to focus on issues pertaining to wages and working conditions, becoming smaller in vision and more narrowly focused, as opposed to the grand gestures and activism of the 1930’s and 40’s:

“For thirty or so years following its enactment, the NLRA largely succeeded in its goals. The Act moved U.S. labor relations and practices from an employer-dominated system to one in which workers had some say on wages and working conditions through elected union representatives. Huge organizing strikes disappeared as the law took hold. Organizing campaigns focused on convincing more than fifty percent of workers to vote for the union in the NLRB representation election. Employers and unions learned what was, and was not, permissible and fought to gain advantage within the boundaries of the law. By the mid 1950s, thirty-six percent of private-sector workers were members of unions.” (Freeman, 2011)

The 36 percent unionization rate of the mid 1950’s would be the high water mark for union density in the United States during the 20th century. The unionization rate has been in near constant decline during the fifty-plus years since that time. This high water mark almost perfectly coincides with the 1955 merger of America’s two largest labor organizations, the American Federation of Labor (AFL), and the Congress of Industrial Organizations (CIO), to create the AFL-CIO.

The AFL-CIO remains to this day the nation’s largest labor organization. From its inception, it has largely followed the framework set forth by the NLRA. The AFL-CIO has never actively embraced a vision for unionism which called for social movement, militancy, and mass demonstration. The new federation instead shied away from mass demonstrations and militancy, focusing its efforts on lobbying members of Congress and bargaining good contracts for its workers.

This form of unionism has come to be known as “business unionism”. This narrowly focused version of unionism has served its members extremely well in terms of contracts regarding wages, benefits and working conditions, but it has hurt the labor movement as a whole, resulting in a fifty year slide in union density. Since the AFL merged with the CIO, “organized labor has felt less like a social movement and more like a trade association” (Fletcher, 2012, p. 123).

In 1972, the President of the AFL-CIO, George Meany, dismissed any concerns over declining unionization rates by saying:

“Why should we worry about organizing groups of people who do not appear to want to be organized?… I used to worry about the size of the membership…I just stopped worrying because it doesn’t make any difference” (Freeman, 2011).

This callous disregard towards organizing new members reflected the ambivalence of the AFL-CIO toward organizing and building a social movement. It was focused primarily on serving its own members and keeping them happy. Had Mr. Meany known that 50 years later unions would be on the verge of irrelevancy on the national stage, perhaps he would have felt differently. But at this time, the union movement was fat and happy.

The activism and big ideas that characterized the labor movement of the first half of the 20th century, was replaced in the second half by a lack of vision, small ideas, and overall complacency. Labor unions ceased to be a movement, becoming more like a service group for the small portion of the workforce lucky enough to be a part of a union. Under this philosophy, labor suffered a steep and precipitous decline. “Between 1979 and 2011, the percentage of workers belonging to unions dropped from 23.4 percent to 11.8 percent” (McNichol, et al, 2012)

Today, It is time to recall the social uprisings of the 1930’s. Today’s working class has less voice and less power than any worker’s since prior to the Second World War. As the Dow Jones Industrial Average and corporate profits hit all-time highs, working people continue to struggle. Unions can stand for all workers, and all workers can be part of a union.

Together, we are strong. Business presents a unified front, with groups like the Chamber of Commerce and the National Association for Manufacturers constantly waging war on workers. It is time for workers to stand together as well. Gay, Straight, Black, White, Blue Collar, White Collar, Hispanic, Northern, Southern, Eastern, Western…. We are all workers, and we can make our world better by embracing a social movement that demands our voice to be heard.

It is not going to be easy, but it is necessary. Nobody is ever going to hand us anything. Recent years have seen social movements for gay rights, women’s rights, Black rights, and Hispanic rights, isn’t it time we had a social movement for worker’s rights? Isn’t it time we all stopped putting up with increasing workloads for an ever lessening piece of the pie? Things will never get better unless we all realize we are in this thing together, and like the Flint GM workers who illegally occupied private property in 1937, we are going to have to take it, rather than to continue to wait for someone to give it to us.