Islamisation and Kurdification of Indigenous People of Iraq 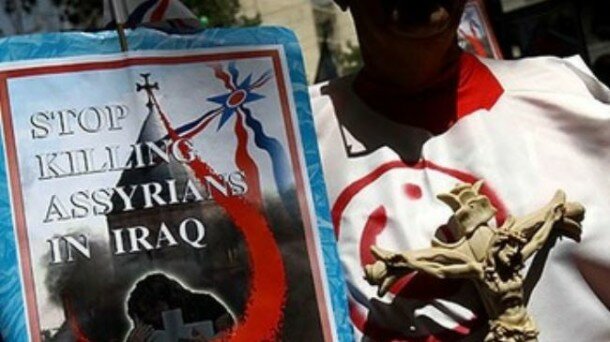 Assyrians are the indigenous people of what is known today as Iraq; they belong to the historical land of Assyria, in the north of modern Iraq. Their state fell to the Persian Medes and the Chaldees in 612 BC. Today, Assyrians are distinct in their identity which still survives and is practiced in cultural forms of language and traditions.

Their language is “Modern Assyrian” (Akkadian with Aramaic accent influence), sometimes called “Syriac” liturgically. They were the first nation to embrace Christianity in Iraq as is cited in the First Epistle of Peter: 5-13, and belong to several churches which, in chronological order, are as follows: the Assyrian Church of the East, the Syrian Orthodox Church, the Chaldean Church, the Syrian Catholic Church, Evangelical and Protestant churches, and the Ancient Church of the East. Their biggest population is in the Diaspora because of the genocides they have been subjected to at the hands of Kurds, Turks and Arabs. In Iraq, there are about 500,000 Assyrians with the overwhelming majority living in Occupied Assyria (North Iraq); around two million live in the Diaspora. Since 2003, one million have been displaced from Iraq.

Militias collected by Western powers with the help of Turkey and a few Gulf puppet-states have assaulted the second largest city in Iraq in broad daylight, taking it after the Iraqi Army withdrew. The army is itself a mere collection of sectarian and ethnic militia groups harbouring hostility towards each other. In the city of Mosul these militias are commanded by Sunni and Kurdish officers connected with factional agendas.

The interests of both Arabs and Kurds converge in ISIS activity in Mosul not least because Sunni Arab tribal chiefs profit from weakening Iraqi Prime Minister Nouri Al-Maliki politically and pressurizing him internationally to force him out of the post. The Kurds’ interest lies in remapping Iraq so that the Sunni area adjacent to the Kurdish occupation zone becomes chaotic, vandalized by gangs for the benefit of Erbil which will be promoted as a “Paradise of Achievements” to a blind world. Assyrians will flee, coerced, to the Kurdish occupation region which has remained untargeted by ISIS, and Kurds will thereby gain the ostensibly-Christian West’s trust, claiming that they can save the persecuted Assyrians, and ultimately declare the Kurdish region to be an independent state. The US and its followers are arming Kurds under the pretext that ISIS must be confronted, preparing them tacitly to gain military strength against the Iraqi state and to impose their independence as a pro-US oil entity. In his promises to Henry Kissinger, Mustafa Barzani has always considered his future “Kurdish state” as a US state in case of independence.

The ISIS conspiracy show has been exposed ever since Mosul was handed over to the group. There came Obama’s declaration that his jet-planes would interfere to “stop ISIS’s advance towards Erbil” and to protect US interests, embellishing his discourse with a humanitarian flavour about Yazidi refugees. It is a familiar pattern that since the US set the foundation for the “New Middle East”, about which Condoleezza Rice spoke to the Israel lobby group AIPAC in June 2005, sabotage groups are established only to be eliminated once their mission is fulfilled. The US sets geographical boundaries which such groups must not breach. Today, the US is setting the boundaries for ISIS in Iraq.

Iraq, on the other hand, has failed to guarantee safety for Assyrians since the establishment of the state in 1920. Iraqis have taken part in massacres of the Assyrians, or at least in displacing and plundering them. In 1933, Arab and Kurdish tribes collaborated with the government in killing and looting. Today, history is repeating itself, with Assyrians being driven away from Mosul and their ancient villages. Their bitterest enemy is not the “intruders”, as the Iraqi media suggests, it’s their Muslim neighbours.

Consequences of the Nineveh invasion

On the humanitarian level, hundreds of thousands of Assyrians and Yazidis are displaced in synchrony with Western offers annihilating the Christian Assyrians’ existence in the East, triggered by France’s initiative to give refuge to them. Although a permanent member of the UN Security Council, France has never raised the Assyrian cause, nor have French politicians discussed how to protect Assyrians in their own homeland. Such mistakes have been replicated by other European countries like Germany, as well as the US. A decisive resolution should be approved in favour of their security in their ancestral homeland.

On the national level, the latest foray has brought about a feeling of distrust. Assyrians no longer trust the non-patriot Iraqi Army or the Kurdish militia which pulled away from confronting ISIS. Both incidents prove that those in power in Iraq do not have the capability, or even the intention, to protect Assyrians. Demographically speaking, Assyrians will prefer leaving Iraq after the many failures and in the absence of a voice to represent them at official levels; the Kurds, meanwhile, have clear plans to control their regions officially in Nineveh’s environs in order to prepare for the annexation of those lands to the Kurdish occupation. Kurds have always sent their followers to international forums to interrupt international protection for Assyrians. “The Kurds object to the establishment of a protected Christian enclave, because they want to annex the Nineveh Valley, most of whose residents are Christians,” reported Israel’s Haaretz newspaper on 24 December 2010.

On 9 August, Britain’s Daily Telegraph published an article by Lord Dannatt, a former Chief of the General Staff in the UK. “With a potential genocide looming, we deployed 3 Commando Brigade on the ground and established a safe area. If we were prepared to go so far then, surely it is even more compelling to do so now, in alliance with the Americans?” he wrote, in reference to establishing a safe haven for Kurds back in 1990.

That is a question asked by Assyrians for 12 years. Over 80 per cent of the Assyrian nation in Syria and Iraq has been displaced. More than 60 churches have been demolished with cries of “Allahu Akbar”. The entire Assyrian Triangle (between Greater Zab and the River Tigris) has been occupied by Kurdish intruders under the slogan “We are taking your lands and you can go to church as you wish”, thereby monitoring the ecclesiastical Assyrian mindset (Chaldees, Syriacs and Church of the East followers). In response, Assyrians in the Diaspora are moving actively to demand international protection. Demonstrators have taken to the streets in those countries which created Iraq in 1921 and rebuilt it hideously in 2003 in preparation for what is happening today. The Assyrians in Iraq are waiting steadfastly for the world’s conscience to awake, to prevent the annihilation of one of the most ancient nations on earth.

What happened recently to the Assyrians is the latest episode in a long history of persecution, an episode which is inseparable from, and which shouldn’t be considered accidental or associated with, ISIS’s practices solely.

Since the establishment of the Iraqi state, developments and events have contradicted all thirty articles of the UN Human Rights Declaration very crudely. These developments confirm that Assyrians in Iraq are not respected socially, demographically or culturally.

Consequently, to avoid the displacement of the indigenous Assyrian people, Iraq must become liable to international surveillance and accountability, thus fulfilling the moral duty of the international community. Jose Francisco Cali Tzay, the President of the anti-discrimination movement ICERD, has, with the full support of its members, called last month for a special session of the UN Security Council to discuss the establishment of a safe zone in the so-called “Nineveh Plain”, located in the south of the Occupied Assyrian Triangle, under international protection.

If, as usual, “interests” conspire to render the international protection undoable, then neither Kurdish nor Iraqi protection can ever put an end to the predicament so long as both sides remain untrustworthy to Iraqis in general and Assyrians in particular. Eventually, it is logical that a super-power state must be the guardian of Assyrians, just as the US is for the Kurds and Iran is for the Shiites. At the end, though, this depends on the Assyrians’ own endeavours in planning for a safer future in their hostile environment.

The writer, Ashur Giwargis, is an Assyrian activist, chairman of “Assyria Patriotic Movement”, which is aiming for the international protection of the Assyrian people.