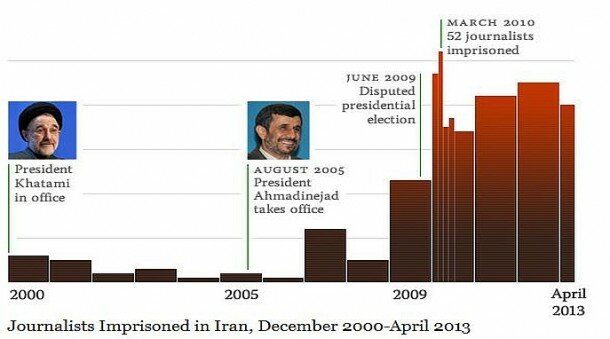 The Committee to Protect Journalists, a New-York based independent, nonprofit organization that promotes press freedom worldwide, reports on Iran’s intense crackdown on independent media ahead of the country’s presidential election in June.

According to the analysis done by the organization, Iran currently has at least 40 journalists in prison, the second-highest total in the world and a figure that reflects the government’s continuing determination to silence independent coverage of public affairs.

“This offensive on the press is choking the flow of information, allowing the government to hold elections behind closed doors in the midst of a crippled economy and international tensions.”

During a panel discussion on Wednesday night, Joel Simon, the executive director for the CPJ, said that the Iranian regime briefly “lost control of their ability to control, manage and manipulate information” after the election and therefore “lashed out with horrendous brutality.”

The report states that Iran had maintained a revolving-door policy in imprisoning journalists, releasing some while rounding up others. Growing crackdown on free speech had resulted “in record numbers” of journalists fleeing the country. At least 68 journalists have fled into exile over the past five years, according to the analysis.

Maziar Bahari, an Iranian-Canadian journalist and former Newsweek correspondent who was imprisoned and tortured following the 2009 election protests also spoke at the Wednesday’s panel.  Bahari noted that because the regime has not mastered how to control the internet yet, it resorts to old ways of limiting or shutting down the media such as a news website or online group.

Last reply was 3 weeks ago