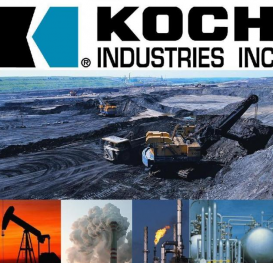 Why are gas prices surging to levels unseen since the 2008 oil spike again while the oil companies report record profits? Much of the problem is actually created by Wall Street traders here in the USA who gamble on oil prices, and powerful multinational companies that manipulate the supply and demand by stockpiling oil when the price is low and expected to rise in near future. And yes, so far this practice is perfectly legal.

Chilton, a commissioner at the Commodity Futures Trading Commission (CFTC), the federal agency that regulates commodity futures and option trading in the United States, says a few players control too much of the market, allowing them to push the price of gas higher and higher. The American public knows very little about the oil speculation industry because a conservative majority on the CFTC has refused to implement the mandates from the Dodd-Frank Wall Street Reform and Consumer Protection Act to curb abuses and provide transparency.

One of those players is the petrochemical multinational Koch Industries. Although oil extraction is a small part of the Koch’s oil business the company has major control over every other part of the market as its core venture is shipping crude oil, refining it, distributing it to retailers, then speculating on the future price. The company actively trades about 50 types of crude oil around the world and has trading operations in London, Geneva, Singapore, Houston, New York, Wichita, Rotterdam, and Mumbai.

When future oil prices are expected to rise, which means when demand is expected to exceed supply, big banks and companies like Koch start buying up oil and storing it in massive containers both on land and offshore to lock in the oil for sale later at a set price.

In 2008 Fortune magazine reported that Koch Supply & Trading leased the 2-million-barrel-capacity Dubai Titan that year, the third supertanker the company has leased, because the demand for oil storage was so high that Koch and other big investors who could not secure storage on land have resorted to leasing supertankers and using them as floating oil tanks.

Koch was one of the companies which lobbied aggressively against the President’s financial reform bill –mentioned above-, particularly on provisions related to transparency in the energy trading market. Representatives from the company’s lobbying firm even argued that moderate levels of the toxic chemical dioxin should not be designated as a cancer risk for humans at an EPA hearing last summer.

When we look at the money Koch has spent on lobbying to influence laws and regulations in Washington in recent years – from $857,000 in 2004 to $20 million in 2008- it is not surprising that Koch’s lobbyists and officials have successfully fought to preserve the industry’s tax breaks and credits, and defeated all attempts by Congress to regulate environmental hazards and transparency requirements.

At the beginning of February 2012, Koch and about 300 other –invitation only- individuals pledged approximately $100 million to defeat President Obama in the 2012 elections at a private meeting in California. And now at the end of February 2012 we are seeing a distinctive rise in the oil prices at the pump. I will not speculate any further as I have the utmost trust in the intelligence of our readers to connect the dots and fill in the blanks.