Greed is a Disease

There is a great deal of truth in the below meme’s powerful statement. Countries like China, Mexico, Bangladesh and others do not have Fair Labor Standards Act (FLSA) — to protect their people from politicians like Michelle Bachmann, Gov. Rick Perry and industry captains the likes of the Koch Brothers and their ilk. 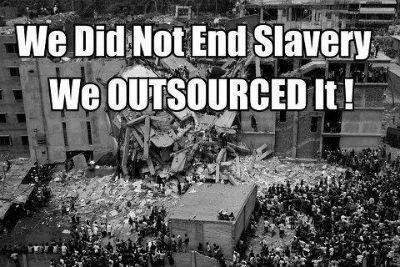 Greed is a disease, suffered by most occasionally and by a few that seeks its symptoms without hesitation; these people dismiss the thought that anyone suffers from greed.

If you are a conservative who pushes the right-wing agenda and talking points, but are capable of your own thought and imagination — perhaps the common American decency still found within your heart can begin to assimilate where we’d be without basic protections.

Those Americans who are just to the right of our political center (not the Glen Becks, Rush Limbaughs, Hannity or Coulter defined distortion of the American political spectrum), merely differ with the Left on a course to shared prosperity and the size of government (privatization v. government sponsored programs). These Americans do not give weight to the Tea Party hosted dream of a fascist American theme. They do not dismiss suffering by the poor with a simple shrug of the shoulders; motivated by a got-mine-get-yours mentality. These are the conservative Americans who are deeply disturbed by the West, Texas fertilizer plant explosion and feel that protective regulations are a necessary component of an honest and productive brand of capitalism.

I do not condemn my fellow Americans that differ in ideology, I welcome their thoughts and realize they represent the “yin and yang” of our great democratic union. Americans were once known for their soft heart, but strong and resolute convictions. Globally, in the eyes of many, we have lost that warmth and steadfast constitution that once defined us with few to compare.

The move by big-business contaminated conservatism and capitalism today in a way that it dissembles factual discussion and tries to get rid off protective regulations, and in an unrelenting effort to squeeze what drops of profit their greed can divine; regardless of cost to the American worker or their families. These are not our heartfelt patriots in essence; they are what we fought during Colonial times to deny a controlling interest in our freedom and this great experiment.

Demonizing the bacterial growth that has enveloped shared prosperity and the love of happiness is only possible through a deeper understanding and identification of the ill conceived trepidation of greed’s evil design. We are in this together and must forge strong bonds with those Americans who still condemn slavery of any flavor — regardless of its origin.