The Greek government said the closure was necessary to meet the country’s debt bailout obligations. It is the latest move in austerity measures aimed at leading the country out of recession.

In April, Greek parliament passed a bill which would cause 15,000 state employees to lose their jobs by the end of next year, as a condition for Greece to receive its next portion of international loans worth $11.4 billion.

Greece was the first country hit by the Eurozone financial crisis since 2009. The European Union and the IMF have promised more than 200bn Euros recue loans for Greece, but requested severe austerity measures in return for aid, including cuts in pay and pensions which led to massive protests and several general strikes in the country.

ERT began broadcasting in 1938 and funded by a direct payment of 4.30 Euros/ $6 added monthly to electricity bills.

2,500 employees of ERT would be fired but they would be paid compensation and would be able to apply for work when the corporation reestablishes as a smaller, independent broadcaster.

Thousands of people, together with the ERT employees, have protested outside the headquarter building in Athens since the shut down and it has also sparked a 24-hour general strike in the country.

“ERT was Greece’s only nationwide public broadcaster. It operated several television and radio stations, plus regional radio services, Greece’s international satellite television station, and Greece’s international shortwave radio service. For years, ERT has been the one unifying link that the Greek diaspora, which numbers over 7 million people around the world, with their homeland.”

“I am now a laid-off single mother with a young child,” she said. “How exactly is this country protecting me? Why are they leaving me without work?”

If you would like to know more about the situation in Greece, read: Greeks Tell Their Story: What Really Happened?

If you would like to support Greek people’s effort to keep their public broadcasting on the air: Save ERT Public Broadcasting in Greece 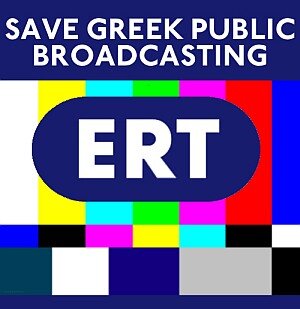