Flip The Debt and Us Uncut Honeywell Action Press Release 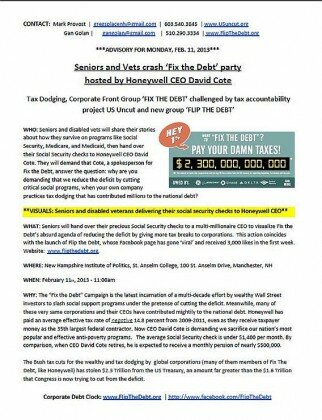 Flip The Debt and Us Uncut Honeywell Action Press Release

Honeywell CEO David Cote and ‘Fix the Debt’ will host a public event on Monday.

Unfortunately for them, a coalition of groups including FLIP THE DEBT, the Alliance for Retired Americans, and US Uncut will hijack their party to elevate our message about the hypocrisy of corporate tax dodgers demanding cuts to social programs.

‘Fix the Debt’ claims to seek bi-partisan solutions to reduce the federal debt and deficit, but Fix the Debt is a CEO-led group whose real objective is huge corporate tax breaks and drastic cuts in Social Security, Medicare, and Medicaid.

The hypocrisy is stunning…

David Cote and his CEO friends receive a lot from government:

In 2011, the firm got $725 million in government deals, making it the 35th-largest federal contractor.

However, these companies contribute very little in taxes: Honeywell’s actual tax rate from 2008-2011 was 2 percent. They are not alone. Corporate taxes as a share of GDP are near record lows.

Perhaps even more galling is Cote’s demand for cuts to earned benefit programs. Cote has $78 million in his Honeywell retirement accounts, enough to qualify for monthly retirement checks of $428,000 starting at age 65. In contrast the average retiree receives just $1,237 a month from Social Security.

If you think it’s time we stand up against corporate tax dodgers, RSVP to the page NOW! Please RSVP ‘Going’ regardless of whether you can attend. This will help you stay connected with the action. Also, we encourage people to post news, info, and photos about corporate tax dodgers on this wall.

Filed under Press Releases · Tagged with Fix the Debt, Flip The Debt, US Uncut