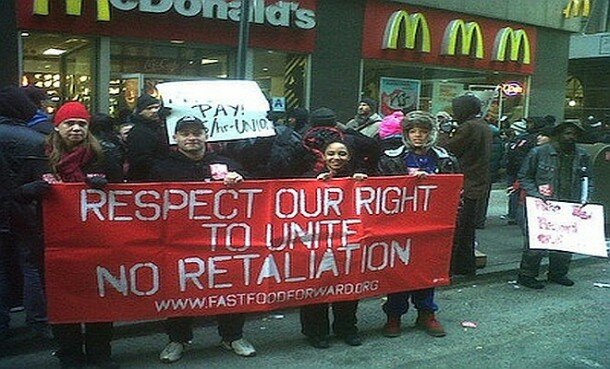 On Thursday April 4th, for the second time in less than a year, workers at fast food restaurants in New York City staged a surprise strike. Over 400 workers at restaurants like McDonalds, Taco Bell, Wendy’s, and Burger King walked off the job.

The workers, who mostly earn the federally mandated minimum wage of $7.25, demanded a living wage of $15 an hour, as well as the right to union representation. The strike was timed to coincide with the 45th anniversary of the assassination of Dr. Martin Luther King, who was killed while in Memphis, Tenn. to support striking sanitation workers

The growth in the number of strikers is significant because it shows that momentum for the strikers’ cause is growing. Many workers who are sympathetic with the cause of the strikers, are reticent to join the protests out of fear of retaliation by their employer. When workers saw that their co-workers who walked off the job in November were not punished for their demonstration, it may have emboldened more workers to join this time around.

The strikes were organized and coordinated by a group called Fast Food Forward. The organization is made up of a coalition of faith based groups, community groups, and labor unions. Labor experts have called this the biggest workplace demonstration in the history of the fast food industry, a sector of the economy which is virtually free of any union presence.

According to Fast Food Forward’s website, the average fast food employee in New York City earns $11,000 per year, while the industry posts over $200 billion per year in gross earnings. Some of the most courageous workers took to the airwaves to share their stories about how hard it is to survive on such a meager salary in New York.

Thursday’s strikes are the latest in a growing wave of worker actions in the food service industry. In March, guest workers at several McDonald’s locations in central Pennsylvania staged a surprise strike over unfair working conditions.

Earlier this week, community activists in South Carolina staged a dine-in in support of restaurant employees at Copper River Grill, a regional chain where workers are scheduled to vote on unionization this week. A victory at Copper River would be a landmark victory for a struggling labor movement in a state and an industry that is virtually union free. Unions have tried unsuccessfully for decades to organize in the south, as well as in the restaurant industry in general.

The fight to organize in the restaurant industry could represent the labor movement’s last and best chance to begin growing again in the 21st century American economy. The economy continues to off-shore manufacturing jobs and replace them with lower wage service sector jobs. With union density shrinking to the lowest levels since prior to the Great Depression, If the labor movement is to survive into the next century, it must begin to aggressively target these low wage industries for organizing.