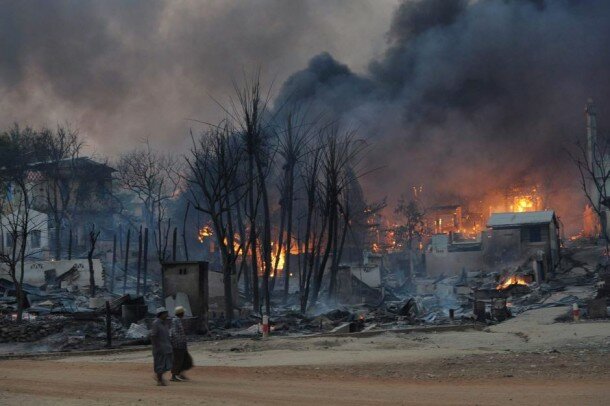 (From Assed Baig, Independent U.K. Reporter, on the ground in Burma.)

Reports of what actually took place in the Central Myanmar town of Meiktila are still emerging. IDPs are beginning to speak out and tell the world of what they witnessed with their own eyes.

“They beat them in front of me. I was watching. I can still see it.” Noor Bi, is crying as she describes the moment when she saw her husband and brother murdered in front of her eyes as she fled Meiktila.

The mob out numbered the police and they were unable to protect the Muslim minority of the town. The 26-year-old is now a widow with a three-year-old son. As she told her story and what she witnessed, the people around her in the make shift IDP camp now set up in the grounds of a Muslim school in Yindaw, began to cry. Grown men sobbed at hearing her ordeal.

“They beat them and beat them, they were still alive when they threw my husband and brother in the fire. They were burnt alive.” Tears stream down her face as she continues to relay her account. “Once they had finished, they told us to bow down to them. We bowed down towards Mecca, but they started to beat us.” Noor pauses and then seems reluctant to tell the next part of her ordeal.

“The police asked the monks and the mob to stop beating us and that they would ensure that we would bow down to the monks.” The faces of the other people listening clearly show their disgust at what she described.

“They made us worship them. That is why we lived on that day,” she looks to the ground, not wanting to make eye contact with me or anyone else. No one blames her; Muslims only bow down in prayer to God, but this was life or death, the IDPs around her, men and women, young and old, all of them Muslim, understand this more than anyone.

The monks that asked to be worshipped were young. Noor Bi was even beaten whilst she was holding her three-year-old son causing her to drop him. Her son was saved by a Buddhist woman who sheltered him and took him to safety.

The fifteen women were put on a police truck and taken to a police station. The police asked them to stay quiet, as they needed to go back and rescue others.

Noor Bi’s account is not isolated. Sixteen-year-old Muhammed (name changed for his safety) saw his friends killed in front of his eyes.

The violence started on the 20th March after an apparent dispute at a gold shop led to mob attacks against the Muslim minority in Meiktila. Muhammed and his fellow students went into hiding when Buddhist monks burnt down their boarding school. It was 9:30am the following morning when the police arrived in three trucks to escort the students to safety.

Muhammed and the students were asked by the police to get on the police trucks. There was only one problem though; they had to get to the trucks and a mob stood between them and safety.

“I felt sick the last time I recalled this.” His eyes look tired, he tells me he is not sleeping well and had a nightmare only last night. “The Buddhists refused to let us walk through their area, even with the police escort. We had to try and walk around, there were not enough police to protect us.” His eyes are full of pain.

“We had to put out hands over our heads and bow our heads and pay homage to the monks as we walked,” Muhammed raises his hands above his head joining his palms together to illustrate what they were forced to do. “They began to attack us. I saw my friends murdered.”

“They dragged Abu Bakr away as he attempted to get on the truck, and began to beat him, he was still alive when they threw him in the fire. He stood back up, and then they stabbed him in the stomach with a sword, twisting it whilst it was in him.” He takes a deep breath, his hands tensed and grasping each other.

“I can still see and hear it.” His family stands around attempting to give him support, his uncle rubs his hand down his back, trying to ease the suffering this young boy has had to endure. Muhammed told me that there were a few new faces within the mob; he described them as having long red hair.

100 people began that walk to the police trucks. By the end of it 25 students and four teachers were murdered, beaten, stabbed and burnt alive. 71 survived but mentally scared for life. There are pictures that corroborate the accounts.

There are many other eyewitness accounts of the horror that took place in Meiktila, they are slowly reaching the world. We must ensure they are not lost.