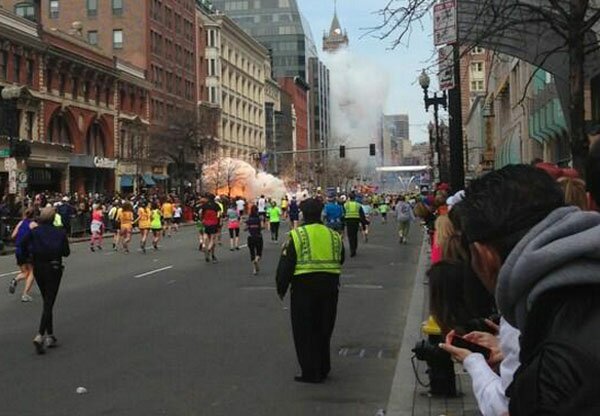 Two explosions, presently speculated to be the result of planned bombings, have rocked the city of Boston at the finish line of the Boston Marathon. Initial reports state that presently dozens are injured. There has yet to be any official reports on the size of the explosions, and no credit has been taken for the attacks.

Unconfirmed twitter traffic suggests some runners and spectators may have lost limbs and possibly lives. Jackie Bruno, a correspondent with New England Cable News (NECN) reported via tweet to have seen runners with legs “blown off…”

After the initial explosion, Boston Police reported detonation of a second device, in front of the Mandarin Hotel on Boylston Street.

Casualty and injury totals have yet to be reported, however numerous tweets and eyewitness accounts paint a graphic and horrifying scene at this annual event.

Progressive Press will continue to provide updates as they become available.

UPDATE: 3:45 PM EST – Initial reports are now stating that at least three people have died as a result of the bombings. Photos posted to Twitter and reposted by The Village Voice show a downtown scene of utter chaos, with blood streaks along the pavement and crowds gathering to render assistance to the wounded.

UPDATE: 3:50 PM EST – Laura Basset of the Huffington Post reports that the explosions occurred at mile 26 of the marathon, which this year was dedicated to the victims of the Newtown Ct. shootings. There are also unconfirmed reports that police have evacuated the area around the Mandarin Hotel on Boylston St, as a third and possibly more unexploded devices have been found.

ATF and Federal Authorities are said to have arrived on scene and have now taken over management and investigation of the incident. New York City authorities have stepped up security throughout the city in light of the Boston bombings.

Police scanner radio traffic has suggested that bomb disposal units are on the ground, issuing warnings that coming explosions are “controlled,” suggesting that additional devices have been located and are being set off by police. Water cannons and other crowd and riot control equipment are reported to have been deployed around the area as precautionary measures.

UPDATE: 4:02 PM EST – RT confirms that three are dead and dozens injured, with as many as ten patients having been admitted to area hospitals missing limbs as a result on the explosion.

Boston Police have reportedly call upon all off-duty officers as situation develops. Third explosion reported in Boston, but is reported to have been a controlled detonation of an as-of-now unconfirmed third explosive device.

Scanner traffic has confirmed that Boylston Street in Boston is presently under police lock down. EMTs presently treating people in the area are warning remaining runners to seek shelter from the cold.

UPDATE: 4:09 PM EST – Boston Police have reported that two, not three individuals are dead as a result of the explosions.

UPDATE: 4:13 PM EST – Scanner traffic suggests additional devices found at Berkeley and St. James Streets. Additional reports suggest that downtown Boston is presently being evacuated of pedestrian traffic and that a no fly zone has possibly been ordered over the city. These reports are as of yet, unconfirmed.

Law enforcement officials have reported to NBC News that the devices found are small, home made explosive devices. Radio scanner traffic has reported on a small explosion at the JFK Library, however it is speculated that such was an electrical explosion, unrelated to the bombings.

UPDATE: 4:26 PM EST – Washington DC officials tell Reuters that security around the capitol has been heightened. AP reports two additional devices have been found and are being disposed of by law enforcement. Malls, shopping centers and businesses throughout downtown Boston are being evacuated.

UPDATE: 4:38 PM EST – Scanner traffic reports police grouping up at corner of Boylston Street and Ring Road in preparation for SWAT deployment in the event of reported suspicious packages or potential devices. Police are requesting bomb sniffing dogs to corner of Boylston and Ring Rd. at California Pizza Kitchen, for reports of suspicious packages. Police deploying are requesting additional radio batteries, suggesting a run on them throughout police districts.

UPDATE: 4:45 PM EST –  Yellow “Penske” rental truck reported to have attempted to gain access to the scene by police. Police report that truck claimed to be filled with medical supplies, but was turned away. Police presently searching for truck. Commonwealth Avenue reported to have been cleared by police, but remains closed to the public. Further radio traffic indicates investigation of another package in the area.

UPDATE: 4:50 PM EST – Police have issued a “be on the look out” (BOLO) order for units in the area of medical facilities to be on the look out for previously reported “yellow Penske truck.”

UPDATE: 4:53 PM EST – Police now stating explosion at JFK Library could be connected to marathon bombing. Numerous eyewitness reports from marathon claim to have witnessed individuals with backpacks near bombing areas minutes prior to explosions. None confirmed yet.

UPDATE: 5:04 PM EST – Suspicious packages found on Boylston and on Boston Common found to be safe. Area cleared. Google, Boston PD and Marathon Officials working to provide listings of runners and victims to provide to public who may be searching for friends or family.

UPDATE: 5:48 PM EST – National Guard and FBI have arrived on scene on Boylston Street. Two Blackhawk helicopters presently circling over Boston. Remaining runners in area being routed to local hotels after searches to get them out of the elements.

Cause for detention or relation to incident presently unknown.

UPDATE: 8:55 PM EST – The Wall Street Journal reports the total number of undetonated devices found by BPD to be five altogether. The FBI has officially taken over investigation of the bombings.

UPDATE: 4/16 4:35PM EST – Boston authorities have revised their previous statements regarding the total number of devices and explosives found, stating that of all items found, including the reported third, controlled detonation, that only the two devices which exploded were all that was actually used.

Initial reports from law enforcement state that at least one device was constructed using a pressure cooker, which contained various shrapnel pieces, including bb’s, ball bearings and nails. Though similar to devices used throughout the globe, the low level of sophistication of the device and lack of claimed credit has not lead to official speculation that the incident was related to foreign or jihadist terrorism.