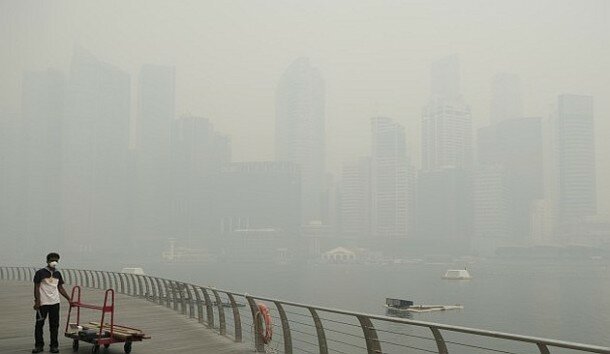 Singapore is experiencing its worst environmental crisis after the unprecedented levels of air pollution forced the country into a halt on Wednesday.

Singapore Government is urging people to remain indoors amid air pollution surging to an all-time high yesterday afternoon and breached a “hazardous” classification that can aggravate respiratory ailments.

A smoky haze brought by forest fires in neighboring Indonesia worsened dramatically, causing summer schools to be closed, public transportation to be stopped, even the food-deliveries are hindered.

Air traffic controllers at Changi airport were told to take precautions because of lower visibility, and McDonald’s said it had suspended its delivery service to protect its workers’ health. (Yes, McDonald’s does home delivery in Singapore.)

Most sports events and competitions have been cancelled and hospitals shut their windows in wards caring for elderly patients, after haze levels hit a new record peak on Thursday, visibility was even further reduced.

The choking smell of burning wood was everywhere, including inside air-conditioned metro trains, and cars were covered with a thin film of grey ash while the tree-lined parks and the streets were almost deserted.

Singapore’s Environment and Water Resources Minister, Dr Vivian Balakrishnan, has warned that the haze engulfing the city-state could last for weeks, as air pollution soared to record levels. He added, “No country or corporation has the right to pollute the air at the expense of Singaporeans’ health and well-being.”

Environment officials from the neighboring nation Malaysia, Indonesia and Singapore have held emergency meetings in Jakarta, to discuss the issue.

There have been suggestions that some of the fires might be blamed on Singaporean and Malaysian companies involved in Indonesia’s plantation industry. But, Indonesian officials have refused the allegations, saying the government is educating farmers about alternatives to traditional slash-and-burn agriculture.

In 1997 and 1998, many countries in the region experienced a similar haze which was caused by smog from Indonesian fires. Named ‘the South East Asian haze’ made over 20 million people ill and caused same kind of road and air traffic disruptions.

After that haze, an agreement on trans-boundary haze pollution was approved by the Association of Southeast Asian Nations (Asean) in 2002. However, Indonesia has yet to ratify the agreement.